Ntouskos pulled a surprise victory in the men’s single sculls with a time of 6min 40.45sec, breaking the previous record of Mahe Drysdale of New Zealand (6:40:45 in the 2016 Rio di Janeiro Olympics) 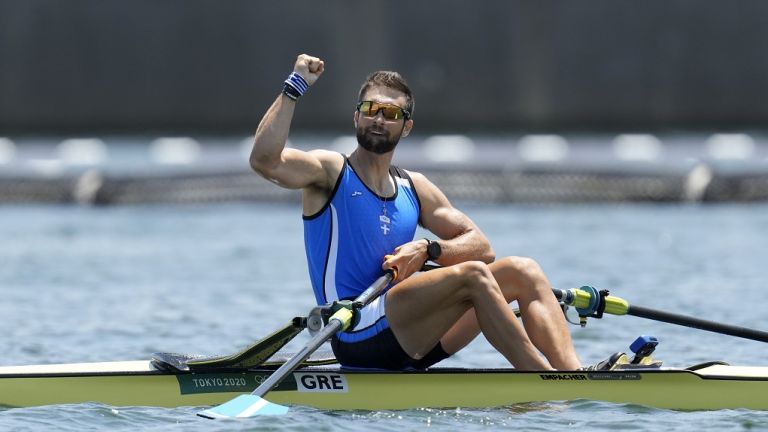 Ntouskos pulled a surprise victory in the men’s single sculls with a time of 6min 40.45sec, breaking the previous record of Mahe Drysdale of New Zealand (6:40:45 in the 2016 Rio di Janeiro Olympics) and defeating two time world champion Kjetil Borch.

It was Greece’s first medal in the Tokyo Olympics, and Greece’s fourth ever Olympics rowing medal.

“I don’t believe it. I really don’t. It was the best course, really. The weather helped me a lot. I felt extremely well during the course. My coach told me I should get a medal, to be in the top three. Between the 650th to 800th metre, I made a change and I didn’t believe I’d endure, but I very much wanted to win a medal. I never believed I’d get the gold,” Ntouskos said.

The 24-year-old Ntouskos, a native of Ioannina, in the first 500 metres of the row was in fourth place but then picked up speed in the last kilometre.

In the 2016 Rio di JaNeiro Olympics in the men’s lightweight coxless four, Ntouskos had finished in sixth place,

TANEA Team 30 Ιουλίου 2021 | 09:38
Share
Δείτε επίσης
Περισσότερα άρθρα για Αγγλική έκδοση
The head of SYRIZA’s Citizen’s Protection policy section simply followed his party’s mannerism Editorial: Mannerism
The cottage industry of lawsuits against educators constitutes a disruption of social peace Editorial: Decisiveness
For the Ecumenical Patriarchate, which has spiritual authority over the Church in America, Elpidophoros, 54, is the best and the brightest that it has to offer. Tempest in a teapot: The attacks on Archbishop Elpidophoros and foreign policy stunts
US President Joe Biden has chosen a particular mixture of policies Editorial: Doctrines
Approximately 160,000 people in Greece today are afflicted with Alzheimer’s disease Editorial: Reminder
Unrepentant, Tsipras unleashed charges against the government and announced handouts Editorial: A return to the past
The country is in great need of stability., not electoral surprises Editorial: Normalcy
The EU’s adjustment of financial rules has facilitated the situation Editorial: Lessons
Editorial: The conundrum of early elections
It is common knowledge that all political parties seek the vote of Greece’s youth Editorial: Greece’s youth
In a democracy, elections cannot serve as a weapon for prime ministers Editorial: The need for electoral stability
Mitsotakis rules out any prospect of political consensus with SYRIZA
Merkel’s statement should lead us collectively to a rethinking of what happened and not reflexive indignation Editorial: The price of imprudent politics
Self-tests, contact tracing key to safe re-opening of schools Spike in COVID-19 cases expected after schools open next week
The repercussions of these illegal actions are not limited to public health Editorial: A threat to society