The Feb. 1 coup, which overthrew elected leader Aung San Suu Kyi’s civilian-led government, occurred less than two weeks after Biden took office. It presented him with his first major international crisis and an early test of his dual pledges to re-center human rights in foreign policy and work more closely with allies. 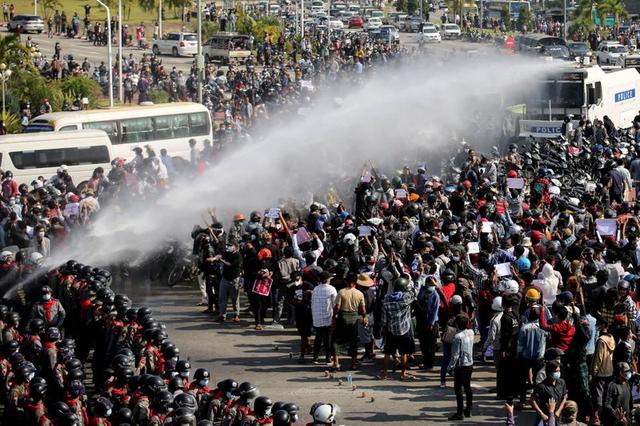 U.S. President Joe Biden announced on Wednesday he had approved an executive order for new sanctions on those responsible for the military coup in Myanmar and he repeated demands for the generals to give up power and free civilian leaders.

Biden said the order enabled his administration «to immediately sanction the military leaders who directed the coup, their business interests as well as close family members.»

He said Washington would identify the first round of targets this week and was taking steps to prevent the generals in Myanmar, also known as Burma, having access to $1 billion in Myanmar government funds held in the United States.

«We’re also going to impose strong exports controls. We’re freezing U.S. assets that benefit the Burmese government, while maintaining our support for health care, civil society groups, and other areas that benefit the people of Burma directly,» Biden said at the White House.

«We’ll be ready to impose additional measures, and we’ll continue to work with our international partners to urge other nations to join us in these efforts.»

The Feb. 1 coup, which overthrew elected leader Aung San Suu Kyi’s civilian-led government, occurred less than two weeks after Biden took office. It presented him with his first major international crisis and an early test of his dual pledges to re-center human rights in foreign policy and work more closely with allies.

Biden said Myanmar was of «deep and bipartisan concern» in the United States.

«I again call on the Burmese military to immediately release the democratic political leaders and activists,» he said. «The military must relinquish power it’s seized.»

«We can impose substantial costs ourselves. We can impose costs that are even steeper … by working with our like-minded partners and allies,» he told a briefing.

Western countries have condemned the coup, but analysts say Myanmar’s military’s will not be as isolated as it was in the past, with China, India, Southeast Asian neighbors and Japan unlikely to cut ties given the country’s strategic importance.

Derek Mitchell, a former U.S. ambassador to Mynamar, said it was vital to get nations such as Japan, India and Singapore involved in a strong response.

«The key will not be just what America does,» he said. «It’s going to be how we get others along with us, allies who may have more skin in the game, more leverage, or at least better relationships with the key players.»

The United Nations’ top human rights body is to consider a resolution on Friday drafted by Britain and the European Union condemning the coup and demanding urgent access for monitors.

However, diplomats said China and Russia – who both have ties to Myanmar’s armed forces – are expected to raise objections or try to weaken the text.

Protesters returned to the streets of Myanmar on Wednesday despite the shooting of a young woman the previous day, with some using humor to emphasize their opposition to the coup.

The protests have been the largest in Myanmar in more than a decade, reviving memories of almost half a century of direct army rule, punctuated with bloody army crackdowns, until the military began relinquishing some power in 2011.

The military justified its takeover saying a Nov. 8 election, which Suu Kyi’s National League for Democracy (NLD) party won by a landslide, was a fraud. The electoral commission dismissed the army’s complaints.

While Biden did not specify who would be hit with new sanctions, Washington is likely to target coup leader Min Aung Hlaing and other top generals who are already under U.S. sanctions imposed in 2019 over abuses against Rohingya Muslims and other minorities.

There were no reports of violence on Wednesday, and in many places protests took on a festive air, with bare-chested body builders, women in ball gowns and wedding dresses, farmers on tractors and people with their pets.

Thousands joined demonstrations in the main city of Yangon, while in the capital, Naypyitaw, hundreds of government workers marched in support of a growing civil disobedience campaign.

The Biden administration has been working on its Myanmar policy with both fellow Democrats and Republicans.

Biden’s national security adviser, Jake Sullivan, spoke on Wednesday with Senate Republican leader Mitch McConnell, who has a longstanding interest in the country and a close relationship with Suu Kyi, a McConnell aide said.

Suu Kyi, 75, won the 1991 Nobel Peace Prize for campaigning for democracy and remains hugely popular at home despite damage to her international reputation over the plight of the Rohingyas.

She has spent nearly 15 years under house arrest and now faces charges of illegally importing six walkie-talkies. Her lawyer says he has not been allowed to see her.

TANEA Team 11 Φεβρουαρίου 2021 | 11:08
Share
Περισσότερα άρθρα για Αγγλική έκδοση
We citizens are not keeping our side of the public health bargain Editorial: Keys
Over 2.5 million people all over the world – of whom 6,400 of our fellow-citizens – have lost their lives Editorial: One year later
The inability of competent authorities to communicate Editorial: Commitments
José Manuel Campa Banks need to actively manage new NPLs
Turkey’s policy is dictated largely by the major domestic problems Editorial: Remaining dedicated to dialogue
The speediest possible issuance of pensions reflects the quality of social cohesion. Editorial: Pending issues
The EU bureaucracy has proven dangerously slow Editorial: Certificate
Yellen says Treasury will fight misuse of cryptocurrencies, foster innovation