'The skirmish two days ago at a Nato foreign ministers’ teleconference between US Secretary of State Mike Pompeo and his Turkish counterpart Mevlut Cavusoglu does not alter the facts, nor does it signal a shift in Washington’s stance towards Ankara.' 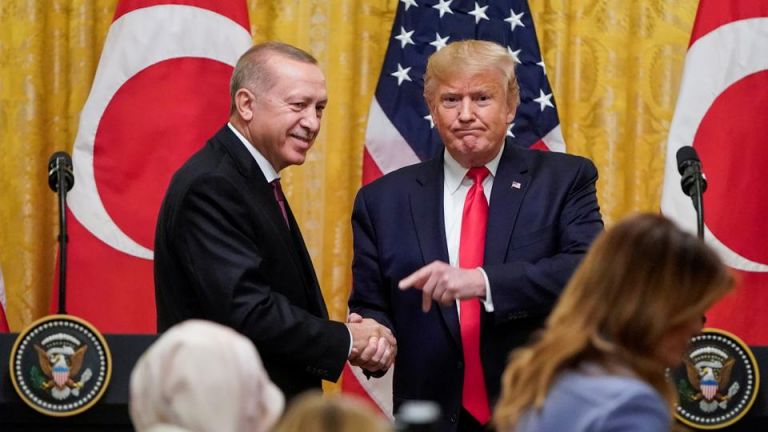 The United States, in contrast with the European Union, is a country where other countries knowswho to call when they need something.

It is also a country characterised by continuity in its foreign policy.

Hence, the decisions that will be made by outgoing President Donald Trump until President-Elect Joe Biden’s inauguration on 20 January, 2021, on issues such as the prospect of new sanctions on China, will not likely6 be overturned in the first phase of his presidency in any event.

Foreign policy could not but have fallen victim to Donald Trump’s erratic politics.

Turkish President RecepTayyip Erdogan enjoyed a privileged relationship with Mr. Trump, who never hid his admiration for his Turkish counterpart.

Indeed, Trump repeatedly dug Erdogan out of a hole as his former National Security Advisor John Bolton revealed in his bombshell book “The Room Where It Happened”, which was released earlier this year before the US presidential election.

Trump helped despite tensions with Erdogan over Trump’s refusal to extradite to Turkey Erdogan’s arch-enemy, Fetullah Gulen, and Erdogans’ longstandindg refusal to allow the American Pastor Branson to be released from a Turkish prison.

As violent as it may have been, the skirmish two days ago at a Nato foreign ministers’ teleconference between US Secretary of State Mike Pompeo and his Turkish counterpart Mevlut Cavusoglu does not alter the facts, nor does it signal a shift in Washington’s stance towards Ankara.

Mr. Biden is in general not fond of authoritarian leaders. His foreign policy will be neither centred on personalities nor knee-jerk.

Yet, his general orientation will not differ substantially from those of most American administrations over the last decade.

Along with normalcy one will see continuity.

TANEA Team 3 Δεκεμβρίου 2020 | 21:32
Share
Δείτε επίσης
Περισσότερα άρθρα για Αγγλική έκδοση
People want answers, persuasive plans, and arguments Editorial: Maturation
The pandemic and citizens’ fears regarding inflation have shocked households Metron Analysis poll: SYRIZA trails New Democracy, KINAL-PASOK skyrockets
It is imperative for the weapons programme to be implemented immediately Editorial: Arrivals
The charges of the victim garnered attention nationwide Editorial: Support
Greece is a peaceful Western country Editorial: Vigilance
Both SYRIZA and PASOK are in a transitional phase Editorial: Changes
Tsipras posts on the social media and frequently as possible Editorial: Obligations
Universities have become a sort of state within the state Editorial: Enough is enough!
Nobody for whatever reason has the right to beat a professor Editorial: Zero tolerance
The shift in America’s priorities should come as no surprise Editorial: Fluidity
We have the weapons, the experience, and obviously the collective will Editorial: Transcending the pandemic
How do you negotiate with Vladimir Putin? Editorial: Dilemma
Editorial: Phenomenon
Maintaining tensions does not contribute to dialogue or good neighbourly relations Editorial: Pragmatism in Greek-Turkish relations
The alarm bell of daily life is urgently ringing Editorial: Alarm bell