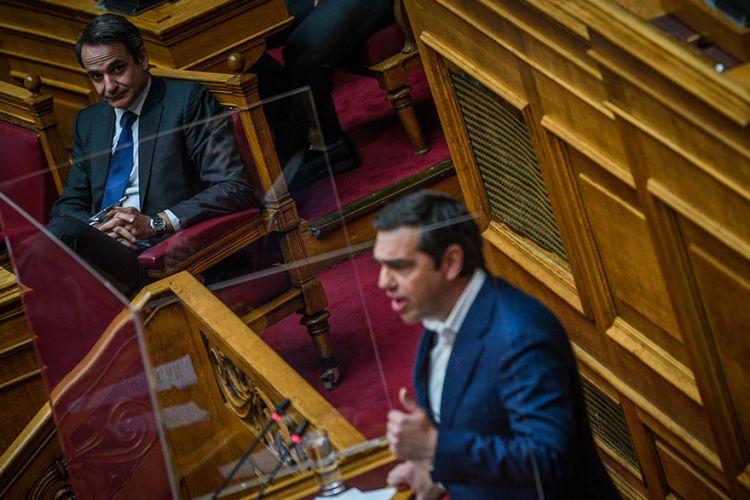 We are living in trying times in a country that before it had a chance to recover from the bailout memorandums era was, along with the rest of the planet, suddenly plunged in the deep crisis wrought by the battle against a hitherto unknown enemy, the SARS-CoV-2 pandemic.

The only thing that seems not to have changed particularly over the last months is the domestic political scene.

Political parties appear unable to abandon their customary reflexes and seem to be at a loss in the face of a global problem that may in the final analysis transcend them.

It is not too much to ask them to adapt to the new realities.

No one is asking for politics to abandon its traditional symbols and clashes. Competition is an inextricable part of the democratic political process.

Yet parties can and should co-exist by working to defuse hostility and to build consensus whenever and wherever possible in the name of the common good.

This demand does not pertain only to the opposition because in that case we would be talking about the elimination of necessary pluralism.

It also applies to the government which must remember that in order for political predominance to last it must be built on social cohesion.

That cohesion is not something that can be imposed. It requires that a government keep its eyes and ears focused on society and display a spirit of consensus and cooperation with other political parties.

TANEA Team 19 Νοεμβρίου 2020 | 22:04
Share
Δείτε επίσης
Περισσότερα άρθρα για Αγγλική έκδοση
We can no longer tolerate violence and lawbreaking Editorial: Toleration of violence at universities must end
A coarse opposition stance is ill-advised Editorial: Seriousness
We have the weapons. We have fine scientists. We have the experience. We can. Editorial: Urgency
There were delays and tragic omissions in offering proper services to patients Positive Voice in a rough terrain: A look back at the history of HIV/AIDS in Greece
Greece has a multi-faceted policy in its foreign relations and that is how it should continue Editorial: Sobriety in foreign relations
We see irresponsible behaviours and an attitude that the virus is no longer with us Editorial: Behaviours
The virus recognises no geographical borders Editorial: Nobody is safe
Delays and foot-dragging have long led even to the denial of justice Editorial: Expediting justice
Erdogan’s insistence on keeping interest rates low led him to fire three central bankers Editorial: Turkey’s lonesomeness
Turkey traditionally exports its domestic crises Editorial: Turkey's domestic, foreign crises
Nobody has the right to deny their share of responsibility in the common effort Editorial: Joining forces to confront the pandemic
Of intubated patients, 83 percent are unvaccinated or partially vaccinated EODY: 105 COVID-19 deaths, 7,287 infections confirmed in the last 24 hours, 608 intubated
We must continue to insist that the state is obliged to be citizen-friendly Editorial: 'Guinness World Record'
Behind Lukashenko stands Putin, who backs and assists him Editorial: European sovereignty
The pandemic is an issue of life and death, and the protection of public health is a common aim Editorial: Consensus on managing the pandemic, even at the last minute