'We must send a message to the younger generations, a message against fascism,” said 69-year old Sophia. “It’s our duty to democracy to be here today, to show we are standing up against such criminal actions.' 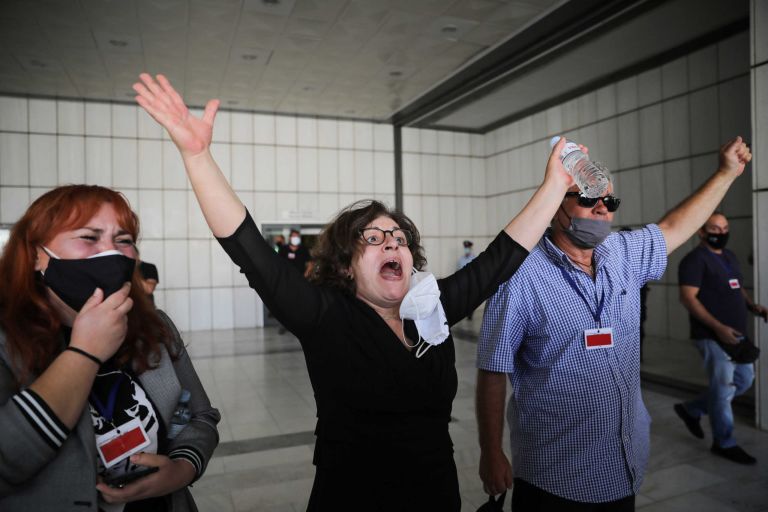 Leaders of Greece’s far-right Golden Dawn, the country’s third most popular party in parliament during the debt crisis, were guilty of running a criminal organisation, a Greek appeals court ruled this morning.

Golden Dawn entered parliament for the first time in 2012 on the back of an anti-austerity and anti-immigrant agenda, becoming Greece’s third-most popular party at the peak of its worst financial crisis since World War Two.

But the killing of 34-year old leftist rapper Pavlos Fyssas by a party supporter in 2013 prompted a crackdown that led prosecutors to arrest and investigate Golden Dawn leaders and lawmakers over a series of crimes.

Greek police fired teargas into crowds gathered outside the courthouse after fringe elements in the crowd hurled petrol bombs at police, according to Reuters witnesses.

It was the first time that elected politicians had been jailed in Greece since a military coup in 1967 Golden Dawn failed to win a single parliamentary seat in last year’s parliamentary election that brought the conservative New Democracy party to power.

There is a threshold of three percent of the popular vote required for a party to enter Parliament.

Prosecutors had charged 65 people, including 18 former Golden Dawn lawmakers with being members of a criminal organisation (Golden Dawn).

Their trial started in April 2015. At the time, the party said it was the victim of a politically motivated witch-hunt.

Dozens of others on trial, party members and alleged associates, face convictions on charges that range from murder to perjury, linked to a spate of violent attacks on immigrants and left-wing activists.

Fyssas and other violent attacks, including the murder of a migrant.

“We must send a message to the younger generations, a message against fascism,” said 69-year old Sophia. “It’s our duty to democracy to be here today, to show we are standing up against such criminal actions.”

“The accusations against the leaders and members of Golden Dawn, including the murder of Pavlos Fyssas, expose a fissure that exists not just within Greece but across Europe and beyond,” said Nils Muiznieks, Europe director at Amnesty.

TANEA Team 7 Οκτωβρίου 2020 | 15:34
Share
Δείτε επίσης
Περισσότερα άρθρα για Αγγλική έκδοση
Turkey and Greece are moving in opposite directions Editorial: Turkey's dangerous games
The Ukrainians are fighting on home turf and have very high morale Dinner with Zelensky: the character of a Ukrainian hero
The PM is also mulling a substantial cabinet reshuffle Mitsotakis no longer rules out early elections, possible autumn dates floated
Editorial: A scourge at our schools
When time is of the essence, the government has a duty to act Editorial: It is high time for reforms
Mitsotakis underlined Greece’s crucial geostrategic position PM Kyriakos Mitsotakis’ historic speech to Joint Session of US Congress (full text)
A party without self-criticism and renewal cannot move forward Editorial: Political parties transforming
Greece’s role as an energy hub must be emphasised Editorial: Opportunities
Mitsotakis-Biden talks: Greek-Turkish relations, the war in Ukraine, wayward Turkey’s new role in NATO
It is not in Greece’s interest for Turkey to be isolated or humiliated Editorial: Opportunity
The Marshall Plan prioritised rebuilding export capacity How should a Marshall Plan for Ukraine work?
Drop in COVID-19 deaths - number of infections, intubated patients stable, hospital admissions rise
Policing of universities is an unpleasant but necessary measure Editorial: No excuse
A strict price inspections policy is needed to curb untrammelled price hikes Editorial: Dealing with inflation
Editorial: Axes