For a year-and-a-half Vartholomeos has been the target of an intensive propaganda campaign by both the Kremlin and the Moscow Patriarchate, which in both the Soviet era and under Putin has been the long arm of Russian soft (and often not so soft) power. 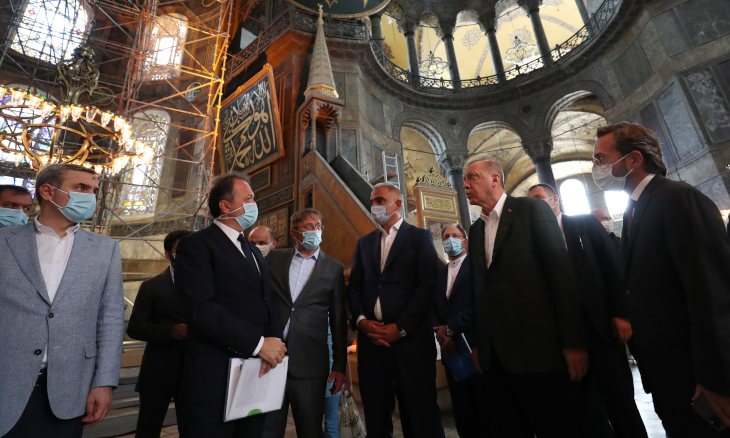 For decades millions of tourists and countless leaders have flooded the vast expanse of the museum that was built in the sixth century CE as the Christian Basilica of Hagia Sophia in Constaninople.

It is indisputably one of the greatest monuments of Western Civilization, of the once glorious, thousand-year Eastern Roman Empire

Consequently, it is no surprise that the decision of a Turkish high court and the decree of Turkish President Recep Tayyip Erdogan to convert it into a mosque has drawn the attention of an international full court press.

When the basilica was completed under the reign of the Eastern Roman Emperor Justinian he proclaimed famously, “Solomon I have vanquished thee!” meaning that the basilica had surpassed the glory of the Second Temple of the Jews.

On 24 July four muezzins will call Muslims to prayer at what was for over 1,000 years the largest and most resplendent church in Christendom and then for nearly 500 years a mosque created by Mehmed II, the Conqueror of Constantinople (1453).

Recep Tayyip Erdogan as the self-styled father of post-modern Turkey will proudly oversee an event that he views as world-historical.

Thousands of Muslim faithful will gather inside and around the edifice that was for over 80 years a museum by decree of the founder of the westernized modern Turkish State – Mustafa Kemal Ataturk.

In his nearly two decades at the helm of the Turkish state Mr. Erdogan has undergone a series of political transformations that have gradually but steadily put him at loggerheads with the US and the rest of the Western World.

He has acquired all the marks of a leader who has marshaled the diverse arsenal of authoritarianism – religion, nationalism, neo-imperialism (neo-Ottoman here), and Islamism.

Syria, Libya, and the Eastern Mediterranean are all regions where Mr. Erdogan has – with few impediments so far – challenged Western powers and carved out the role of a regional superpower accountable to no one.

Many have attributed the decision on Hagia Sophia to his Islamist ideology but unfortunately that is a far too simplistic explanation.

Erdogan’s decision to turn the Hagia Sophia Museum – a UNESCO World Heritage Site – belies the pundits who view the move as a bid to eradicate Kemalist hegemony over Turkish political life.

He has long ago definitively crushed the entire Kemalist establishment – military, academic, judicial, intellectual, and bureaucratic – after the abortive and very short-lived 2016 military coup against him.

These Kemalists who were essentially branded enemies of the people or, even worse, as followers of Erdogan’s  archrival  and erstwhile ally Fetullah Gulen, languish in prisons and have faced untold suffering.

No, Mr. Erdogan did not decide to turn Hagia Sophia into a mosque in order to obliterate the Kemalist legacy.

The move has clear geopolitical motivations and effects and it was carefully calculated in Ankara and abroad.

The conversion of the Hagia Sophia museum into a mosque is as odd as it may seem a Russo-Turkish affair.

It is Mr. Erdogan’s commercial and military strategic alliance with Russia through which the Turkish leader has heaped scorn and contempt on Washington and NATO that is the foremost and definitive motivation for an otherwise perplexing move and timing.

Why Russia? The answer is quite simple for those in the know.

Hagia Sophia was always as a Christian Cathedral the seat of the Ecumenical Patriarch, the first among equals in the Eastern Orthodox Church and the second highest-ranking bishop in Christendom until the 1054 schism that ended Christian unity and still splits Rome and Constantinople.

In the 16th century, the Moscow Patriarchate began to propagate the theory that it is the “Third Rome” – the Roman Emperor Constantine in 330 established the Christian Eastern Roman Empire  or “New Rome” (second Rome according to the Russian construct).

The theory and the claim remained largely dormant though never forgotten until January, 2019, when Ecumenical Patriarch Vartholomeos after two decades of petitions from the Ukrainian Orthodox faithful granted the Ukrainian Orthodox Church Autocephaly (administrative independence), wrenching it from the arms of Moscow and triggering an ecclesiastical and geopolitical war.

For a year-and-a-half Vartholomeos has been the target of an intensive propaganda campaign by both the Kremlin and the Moscow Patriarchate, which in both the Soviet era and under Putin has been the long arm of Russian soft (and often not so soft) power.

The Ecumenical Patriarchate, however, much to the chagrin of Moscow, still exists, as it has survived the Ottoman and later Turkish persecutions and pogroms of the 19th and 20th centuries.

The pogroms almost eradicated the Greek minority of Istanbul, but the Patriarchate has survived, not least because of the staunch backing of Washington from the Cold War until this day.

Today, the venerable Hagia Sophia, the imperial and patriarchal cathedral, has become an apple of discord between East and West.

The decision to convert the Hagia Sophia Museum (since 1938) into a Mosque was not taken solely in Ankara.

Washington, NATO, and the entire Western world cannot but take this into consideration and act accordingly.

TANEA Team 21 Ιουλίου 2020 | 04:04
Share
Δείτε επίσης
Περισσότερα άρθρα για Αγγλική έκδοση
Athens' objective was to avert concessions that might affect Greek interests Greece, Turkey declare their satisfaction with results of NATO summit
What is at stake is the strategic depth of the Alliance Editorial: A crucial NATO summit
European supervised drug consumption sites have been an inextricable part of drug treatment Editorial: The first step
The overturning of Roe v. Wade turns the clock back 50 years for American women. Editorial: Back and forth
Thymios' statement - “I no longer trust people.” – is a punch in the gut. Editorial: A punch in the gut
Editorial: Audits of politicians' wealth
Mario Draghi has a prominent position in the EU architecture Editorial: Alliance
After a certain point, the necessary caution is a matter of personal responsibility Editorial: COVID-19 and personal responsibility
Extremists still constitute a threat Editorial: Threat
A consciously responsible stance is needed Editorial: Maintaining COVID-19 alertness
The late PM Constantine Karamanlis famously said, 'We belong to the West' Editorial: Contradictions
The end of EU enhanced fiscal supervision signals the exit from the tunnel Editorial: Breakthroughs
Head of Greek Pomaks’ Association rips into Erdogan’s revisionist expansionism
All Greek governments since Andreas Papandreou's demanded the return of the Marbles Osborne: ‘Deal to be done’ on sharing Parthenon Marbles
All efforts toward a radical resolution of the refugee problem have failed Editorial: The end does not justify the means