The press saw the Greece-Italy EEZ agreement as one that secures the right of islands, but it has three distinct parameters that must be assessed. 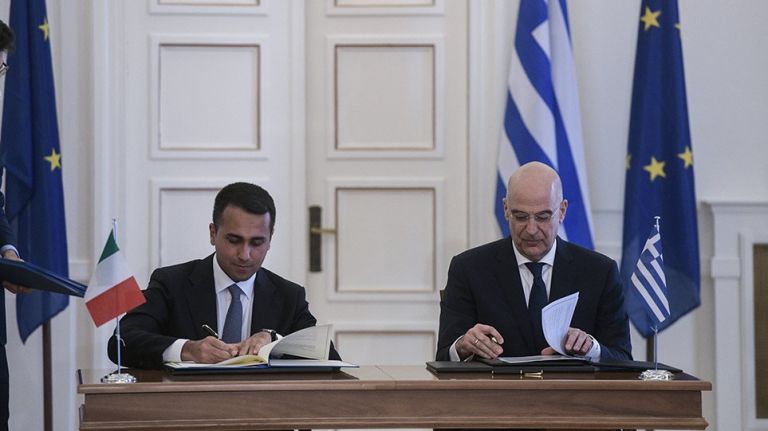 The Greece-Italy agreement on the delimitation of their bordering Exclusive Economic Zones (EEZs) negotiated by the two countries’ foreign ministers and signed yesterday is undoubtedly historic.

The press saw the agreement as one that secures the right of islands, but it has three distinct parameters that must be assessed.

The first is the geopolitical confluence of events with which the government dealt. The entire Greek people and political system must not forget that.

Neighbouring Turkey is escalating a revisionist and dangerous foreign policy based on the neo-Ottoman outlook that former PM Ahmet Davutoglu dreamt of and that Erdogan is implementing step-by-step.

That is exactly the message of the agreement signed yesterday – that Greece as a peaceful country that is European and respects international law can act diplomatically to deter threats with a long-term strategy.

The second parameter is the content of the agreement – the right of islands to have sea zones. The continental shelf between the two countries is as of yesterday the borderline of their EEZs.

Let us not forget that Ankara disputes that islands have a continental shelf and that view was the basis of the illegal Turkey-Libya agreement on their EEZs, which in fact do not border.

The third parameter is the alignment with Italy in the area of resources and fishing policy.

That is a strong and clear message.

TANEA Team 10 Ιουνίου 2020 | 23:12
Share
Δείτε επίσης
Περισσότερα άρθρα για Αγγλική έκδοση
Today Greece has the opportunity to draft its own economic roadmap for the future Editorial: Challenge
Marinakis: «The result was clearly distorted – Dräger was fouled before the goal»
It is behind closed doors that the harshest stories of violence against women are hidden Editorial: Silence means sharing the guilt
Fourteen ICU beds, donated by Evangelos Marinakis, Angeliki Frangou and ION S.A. ready for use
SYRIZA in fact was not so eager to create a common front with the left Editorial: Political flirt
It is not too much to ask our political parties to adapt to the new realities Editorial: Time to build consensus
Any back-pedaling on the public health restrictions that have been imposed would be catastrophic Editorial: No to complacency!
Politicians can visit the historic Athens Polytechnic campus to leave a flower, as the PM suggested, or to lay a wreath as the main opposition leader proposed. Editorial: The cost
Perhaps the government could have handled the matter earlier and differently Editorial: Lives must be saved
We must deprive Turkey of its strongest weapon – the element of surprise Editorial: Equation
It is by now clear that Tsipras and Polakis are one and the same politically Editorial: Political cover
The only way to deter a disaster from the second wave of the virus is to get a vaccine and religiously comply with restrictive measures Editorial: Deterrence
There is an urgent need to strictly enforce the lockdown Editorial: Behaviours
As COVID-19 cases soar Greece announces three weeks nationwide lockdown
The freedom to disseminate applies to ideas and not the distribution of drugs Editorial: Breaking taboos