Over 20 of the current 31 cases were infected on a pilgrimage to the Holy Land combined with a visit to Egypt. The first confirmed case from that trip was a 66-year-old man currently in an isolated intensive care area in the University Hospital of Rio 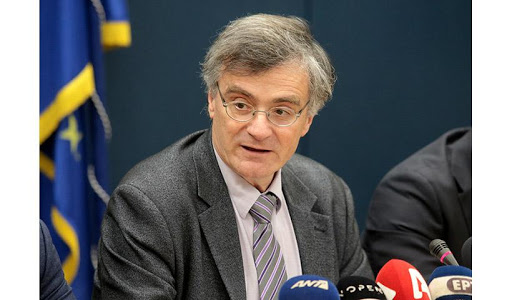 Schools, universities, theatres, cinemas, athletics facilities, archaeological sites, artistic venues and museums have been closed initially for a period of 48 hours in the prefectures of Achaia, Elia, and Zakynthos.

Nationwide measures will be re-evaluated after that period.

The latest data on the increased incidence of the virus in Greece was announced by Athens University Professor of Pathology and Infectious Diseases (ID) Sotiris Tsiodras (photo) on behalf of the health ministry and the National Organisation for Public Health (EODY).

Speaking at a nationally televised news conference Tsiodras sternly advised journalists not to focus on the number of cases and that it is not particularly significant where  individuals were infected  as in the coming weeks a significant rise in the incidence and spread of the virus is a given.

Over 20 of the current 31 cases were infected on a pilgrimage to the Holy Land combined with a visit to Egypt.

The first confirmed case from that trip was a 66-year-old man who is currently in an isolated intensive care area in the University Hospital of Rio, 10 kilometres from the port city of Patras.

When the man was admitted to hospital he was placed in the pathology ward as reportedly staff were initially instructed to isolate only patients that had had recently visited countries with confirmed coronavius cases. The man was initially diagnosed as suffering from a lung infection.

His is the only very heavy case in the country to date and it was confirmed by the Pasteur Institute in Greece.

Of the 24 passengers on the same flight as the man 21 tested positive for COVID-19.

Tsiodras said that over 400 individuals with whom these travelers came into contact have been tested in order to ascertain if family, friends, and others were also infected.

“Israel was among the countries with few cases none of which were transmitted to the community. This particular group returned to Greece on 27 February at which time there were no recorded cases in Israel. This demonstrates the dynamic of the virus which is easily transmissible from individuals with mild symptoms. There are many cases where individuals are not aware that they are infecting others,” he noted.

Of the 21 people who tested positive nine are receiving care at the hospital in Rio and the rest are in isolation in their homes. Of those hospitalised the 67-year-old is the only very serious case

University of Crete faculties based in the city of Rethymno will be closed for48 hours in order to monitor a 20-year-old who had traveled with the aforementioned group.

Tsiodras underlined that a substantial increase in cases is expected in the coming weeks and the health ministry is taking measures to limit the swift spread of the virus.

“There is no need to panic. The extra measures taken in Elia, Achaia, and Zakynthos aim to limit the spread of the virus,” he noted.

The ID professor stressed that only heavy cases should go to hospital and that patients with mild symptoms should stay home and be in touch with their doctor.

Doctors and nurses at the Rio hospital and at the hospital in Amaliada who came into contact with the 67-year-old have been instructed to stay isolates at home for 14 days, which is considered the incubation period for COVID-19.

TANEA Team 5 Μαρτίου 2020 | 20:40
Share
Δείτε επίσης
Περισσότερα άρθρα για Αγγλική έκδοση
Malicious Manzano: A «massacre» for Olympiacos in Velodrome
Editorial: Merkel's disappointment
There is, a pressing need for the state to meet the disaster relief standards that the PM has set Editorial: Accountability
High anxiety in government over potential COVID-19 super spreader event in Patras
Today Greece has the opportunity to draft its own economic roadmap for the future Editorial: Challenge
Marinakis: «The result was clearly distorted – Dräger was fouled before the goal»
It is behind closed doors that the harshest stories of violence against women are hidden Editorial: Silence means sharing the guilt
Fourteen ICU beds, donated by Evangelos Marinakis, Angeliki Frangou and ION S.A. ready for use
SYRIZA in fact was not so eager to create a common front with the left Editorial: Political flirt
It is not too much to ask our political parties to adapt to the new realities Editorial: Time to build consensus
Any back-pedaling on the public health restrictions that have been imposed would be catastrophic Editorial: No to complacency!
Politicians can visit the historic Athens Polytechnic campus to leave a flower, as the PM suggested, or to lay a wreath as the main opposition leader proposed. Editorial: The cost
Perhaps the government could have handled the matter earlier and differently Editorial: Lives must be saved
We must deprive Turkey of its strongest weapon – the element of surprise Editorial: Equation
It is by now clear that Tsipras and Polakis are one and the same politically Editorial: Political cover