Greece is aising to the highest level the measures to guard the country’s eastern land and sea borders by security forces and the Greek armed forces to fend off illegal entry into the country. 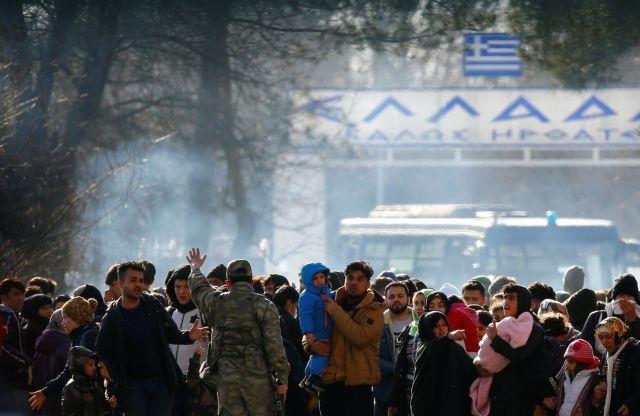 Tensions between Turkey and Greece at the Evros border region and in the Northern Aegean have escalated dangerously in the last two days and Athens tonight called on its EU partners to activate the FRONTEX RABIT rapid action force to guard the outer borders of the Union in response to a clear and present danger to its sovereignty posed by Turkey.

Nearly 10,000 migrants attempted to cross the Greek borders on 28-29 February.

Turkish President Recep Tayyip Erdogan has declared that Turkey has "opened our doors", a move Ankara is linking to its demand that the EU pay billions of euros more to support the 3.6 million Syrian refugees in Turkish territory.

The Greek government announced emergency measures to counter an “asymmetrical threat”, a phrase linked to terrorism and warfare, from Turkey which it accused of directing in a coordinated manner the passage of many thousands of migrants to the land and sea borders of Greece.

It is believed that number could reach 130,000 and the Turkish interior ministry on 1 March stated that over 30,000 migrants were headed out of the country.

Following tonight’s emergency meeting of the Government Council of Foreign Affairs and Defence (KYSEA), chaired by Prime Minister Kyriakos Mitsotakis - and attended by the ministers of foreign affairs, public order and defence as well as the Chairman of the Joint Chiefs of Staff and military brass - the government announced five measures to counter what it clearly views as asymmetrical warfare.

Petsas announced that the KYSEA decided to take five emergency measures to manage the situation in the first instance:

1. Raising to the highest level the measures to guard the country’s eastern land and sea borders by security forces and the Greek armed forces to fend off illegal entry into the country

2. The temporary suspension for one month after the KYSEA decision of the submission of asylum applications of individuals who enter the country illegally

3. The immediate return wherever possible to the country from which they arrived of all people who enter Greece illegally - without registering them

4. Submission of a request to FRONTEX to develop its RABIT force in order to guard Greece’s external borders which are at once the borders of the EU

5. The immediate notification of the EU’s General Affairs Council (foreign ministers) regarding this decision and the activation of the process provide for in Article 78, Paragraph three of the 2007 Treaty on the European Union:

“In the event of one or more Member States being confronted by an emergency situation characterised by a sudden inflow of nationals of third countries, the Council, on a proposal from the Commission, may adopt provisional measures for the benefit of the Member State(s) concerned. It shall act after consulting the European Parliament.”

FRONTEX describes the framework of its Rabit rapid action force (which Greece had also marshaled in 2011) as follows:

"A rapid border intervention is designed to bring immediate assistance to a Member State that is under urgent and exceptional pressure at its external border, especially related to large numbers of non-EU nationals trying to enter the territory of a Member State illegally. The interventions rely on the rapid reaction pools of 1500 officers and equipment from Member States, which are required to provide them – officers and staff within five days and equipment within 10 days."

"A Member State starts the procedure to launch a rapid border intervention by requesting one, along with providing a description of the situation, possible aims and its needs. The Frontex Executive Director may send experts to assess the situation and immediately informs the Management Board of the agency about the request. The Executive Director must decide within two working days whether to launch the rapid intervention, notifying the requesting Member State and the Management Board of his decision."

“Over the last days Greece has been subjected to sudden, massive, and coordinated pressure from the movement of (migrant) populations on its eastern land and sea borders. This movement is directed and encouraged by Turkey. These actions violated Turkey’s obligations under the joint EU-Turkey statement (of 2016, laying down the procedures for Ankara to stem the flow of and take back migrants),” government spokesman Stelios Petsas said in a nationally televised statement tonight immediately after the KYSEA meeting in the courtyard of the PM’s Maximos Mansion offices.

“Turkey instead of limiting the gangs of migrant and refugee smugglers has itself become a smuggler,” he underlined.

The massive flow of migrants was triggered by Erdogan’s announcement that Ankara will no longer abide by the terms of the EU-Turkey statement.

Erdogan’s move came just as Turkey suffered dozens of casualties from Russian-backed Syrian forces in its war in Idlib, which projections suggest may result in an exodus of up to one million Syrian refugees.

Erdogan and his Foreign Affairs Minister Mevlut Cavusoglu are beseaching the US to back Turkish forces with Patriot Missile systems, a move that would dangerously drag Washington into the Turco-Syrian/Russian conflict.

The Obama administration had flatly rejected similar attempts in 2013 by Ankara when it alleged that Syrian forces were using chemical weapons against civilian populations.

American invesaigative reporter Seymour Hersh maintained in a 2014 expose in the London Review of Books maintained that the sarin gas attack that killed hundreds in the Damascus suburb of Ghouta on August 21, 2013 was actually carried out by Syrian “rebel” forces acting at the behest of Turkey, to provide a pretext for a US attack on Syria.

Greek Police, military grapple with Evros border crisis
The KYSEA meeting was preceded by unprecedented tensions at the Evros border, where Greek riot police over the last few days have used tear gas to stave off thousands of migrants, some of whom attempted to cut through barbed wire fences erected there, gathered in the dead zone between Greece and Turkey.

“The individuals that have gathered are attempting with violence to enter Greek territory despite the fact that it has been made clear by the Greek side in every way (including a stern televised warning by Mitsotakis to migrants “Do not come to Greece”) that absolutely no crossing will be allowed,” Petsas said.

“Due to its coordinated and massive character, this movement has nothing to do with international law regarding asylum (international protection which pertains to individual cases. Under such conditions, the current situation constitutes an active, exceptional, and asymmetrical threat to the country’s national security,” said the spokesman.

“These gathered individuals are being used as pawns in order to exert diplomatic pressure. Greece is unswervingly exercising its sovereign right and constitutional duty to protect its (territorial) integrity.”

There have been continual clashes at the Evros border region between migrants, Greek troops, and Greek Police, which has brought in reinforcements from other regions.

Turkish troops are reportedly also participating in the clashes and videos show them firing tear gas on 28 February toward police and border forces on the Greek side of the border in order to facilitate the passage of migrants to Greek territory.

The Mayor of the nearby city of Orestiada stated that Ankara is using drones to drop chemicals toward the Greek side.

TANEA Team 1 Μαρτίου 2020 | 23:48
Share
Δείτε επίσης
Περισσότερα άρθρα για Αγγλική έκδοση
Editorial: A calculated diplomacy
It is the duty of the government to immediately coordinate with the expert committee Editorial: Clarity
Greece's demographic problem is complex and requires political solutions Editorial: Anachronism
A businessman has the right to bar entry to his or her establishment of unvaccinated people Editorial: Reaching an understanding
Editorial: Privileges
The NATO Summit is bound to be newsworthy as it is Biden’s first Editorial: Lines
The government must ensure that the path toward modernisation will begin. Editorial: Changes
Covid free Kythnos island – 100% of the population vaccinated
Tourism minister in the Netherlands
There are strikes, like the one at the port, held just for the sake of declaring them Editorial: Conceptions
Ideally, we should fashion a new social and economic model for Greece Editorial: Model
The government must urgently undertake necessary initiatives to root out organised crime Editorial: Root out organised crime
COVID-19 vaccines and immunity: We are not among the lucky ones
Our era requires balances, seriousness, planning, and of course to defend one’s red lines Editorial: A coordinated foreign policy
The Turkish Foreign Minister confirms that the big goal is to convene a Mitsotakis – Erdogan meeting Exclusive Interview TO VIMA – Mevlut Cavusoglu: The “keys” for a solution