The 'anarchists' who vandalised the home of a journalist declare that in the society they dream of the duty articulated by Voltaire to defend the right of others to express differing opinions has no place. 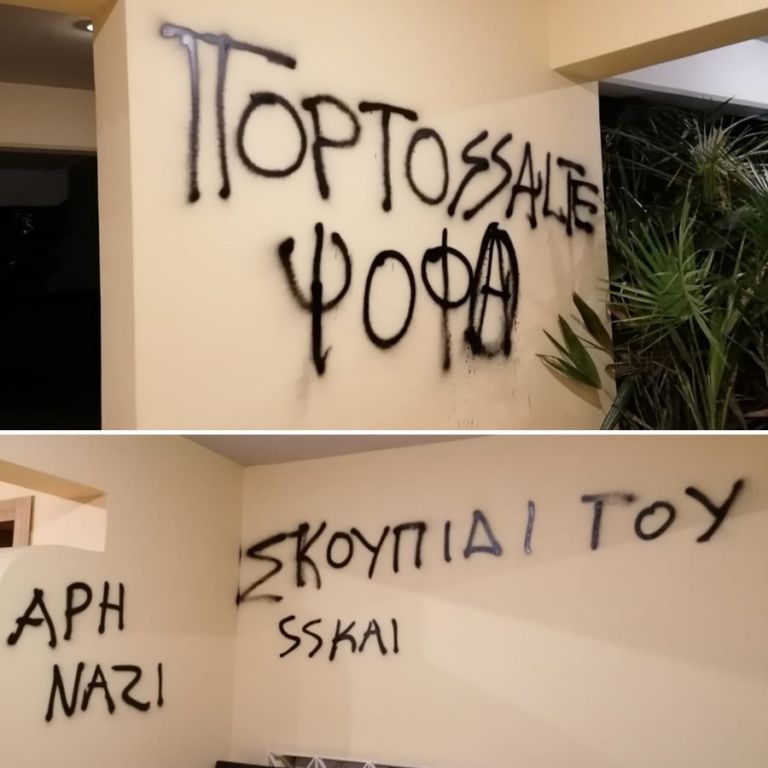 One would expect that in Greece freedom of speech would be taken for granted but alas that is not always the case.

A self-styled “anarchist collectivity” recently spray painted threatening slogans on a building that is the residence of a well-known journalist.

The fascist mentality underlying such acts is not merely an historical affair.

These supposed anarchists should have known that the Nazis terrorised Jewish citizens in a similar manner.

The pretext for this inconceivable act also reveals its fascistic motivation.

The culprits in a statement assuming responsibility for the affront stated clearly that the journalist was targeted due to his opinions, to the fact that they disapproved of guests on his shows, and because they simply because detest his views.

These people declare that in the society they dream of the duty articulated by Voltaire to defend the right of others to express differing opinions has no place.

Greek society, however, is dedicated to upholding the principles of tolerance, spirited dialogue and intense debate.

It is opposed to muzzling differing opinions, censorship, intimidation, and violence.

Given this background it is jarring to see media outlets reputed to have a democratic sensibility to describe such fascistic attacks as “interventions”.

Is it possible for the state-run wire service to use this term?

It seems that freedom of speech cannot be taken for granted in our country.

It requires and arduous, daily effort.

TANEA Team 9 Φεβρουαρίου 2020 | 23:28
Share
Δείτε επίσης
Περισσότερα άρθρα για Αγγλική έκδοση
Fourteen ICU beds, donated by Evangelos Marinakis, Angeliki Frangou and ION S.A. ready for use
It is not too much to ask our political parties to adapt to the new realities Editorial: Time to build consensus
Any back-pedaling on the public health restrictions that have been imposed would be catastrophic Editorial: No to complacency!
Politicians can visit the historic Athens Polytechnic campus to leave a flower, as the PM suggested, or to lay a wreath as the main opposition leader proposed. Editorial: The cost
Perhaps the government could have handled the matter earlier and differently Editorial: Lives must be saved
We must deprive Turkey of its strongest weapon – the element of surprise Editorial: Equation
It is by now clear that Tsipras and Polakis are one and the same politically Editorial: Political cover
The only way to deter a disaster from the second wave of the virus is to get a vaccine and religiously comply with restrictive measures Editorial: Deterrence
There is an urgent need to strictly enforce the lockdown Editorial: Behaviours
As COVID-19 cases soar Greece announces three weeks nationwide lockdown
The freedom to disseminate applies to ideas and not the distribution of drugs Editorial: Breaking taboos
The US must not be a country of divisions and irrationality Editorial: History in the making
Editorial: Totalitarian behaviour
Neither Islamist terrorism nor any other form of terrorism will prevail in Europe Editorial: Our European way of life
Until recently Europe seemed not to understand what Tayyip Erdogan was up to Editorial: Persistence