Greece is confronted by serious challenges. It must adjust its tools, exploit the possibilities offered by new means of communication, and display realism. 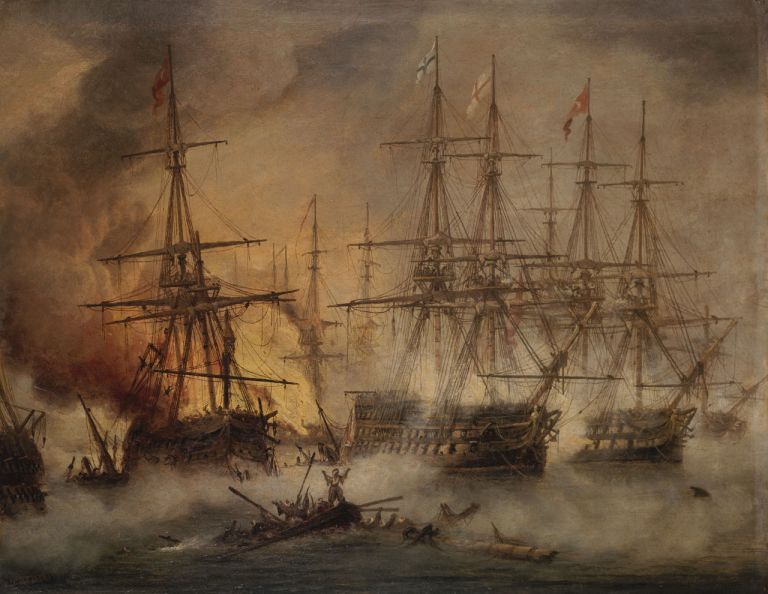 The trips of the prime minister and the foreign minister to countries in Europe, the US, and Middle East, as well as the pro-Greece and pro-Cyprus positions of the EU and individual states such as France and Italy show that we are not alone in dealing with Turkish aggressiveness.

In fact, since the Battle of Navarino in 1827  (photo) Greece has never been alone. Most recently during the 1996 Imia crisis the US intervention to defuse the situation was definitive.

We often have the tendency to underestimate foreign assistance or to skew its significance.

In the first decades after the restoration of democracy in 1974, we cultivated a culture of a weak and slighted country which was accompanied by introversion, xenophobia, and conspiracy theories.

Since then the country has become stabilised, has bolstered its alliances, and has become established in the European family.

Turkey, on the contrary, has become isolated.

As a two-page spread in today’s Ta Nea shows, the concept of national isolation is a big myth.

Trump’s America is of course polarised and the occupant of the White House is unpredictable.

Europe is also fraught with iinconsistency and timidity.

Greece is confronted by serious challenges. It must adjust its tools, exploit the possibilities offered by new means of communication, and display realism.

It must also take initiatives in line with international law because the just have no one and anything to fear.

Ο στρατός του Χαφτάρ ελέγχει το 95% της χώρας λέει Λίβυος βουλευτής
TANEA Team 27 Δεκεμβρίου 2019 | 13:43
Δείτε επίσης
Περισσότερα άρθρα για Αγγλική έκδοση
Greece bolsters deterrent force, prepares response to Turkey’s expansionism
Health ministry undertakes campaigns to combat smoking, alcoholism, obesity
The president-elect of Greece has won people over even before assuming office Editorial: Modesty
Marinakis just dealt the final blow to the so-called ‘clean-up’ of Greek Football in front of UEFA/FIFA
The dialogue Marinakis to Grammenos: «You have been doing anything that Savvidis was telling you for such a long time and now you’ve become sensitive?»
President-elect Ekaterini Sakellaropoulou symbolises Greece’s passage to a new era with greater consensus and less toxicity Editorial: A victory for democracy
'Our country is governed by the rule of law and is a force of stability, growth, and culture' President-elect Sakellaropoulou to focus on defending rights, sovereignty
Turkey’s provocations are non-stop Editorial: Audacity
Hospitals should not be excluded from public-private partnerships Editorial: Partnerships
The government in Tripoli has said that Greece 'has nothing substantial to offer'. Haftar in Athens, Greece to veto EU approval of Libya peace deal if MOU with Turkey not canceled
The nominee has the prestige and wherewithal to serve the office in a worthy manner Editorial: Consensus
The last president who was not a politician was Christos Sartzetakis who served between 1985-1990 In historic move, Mitsotakis taps Council of State chief to serve as first woman president
Realism at all levels and in every way must be the only guide Editorial: Realism
Greece cannot be punished ad infinitum for the errors of the past Lower primary surplus targets key to Greek economic growth
Indian slaves swap life of bondage for seat in boardroom at tea plantation