It is inconceivble for the centre of a capital to be handed over to criminals. 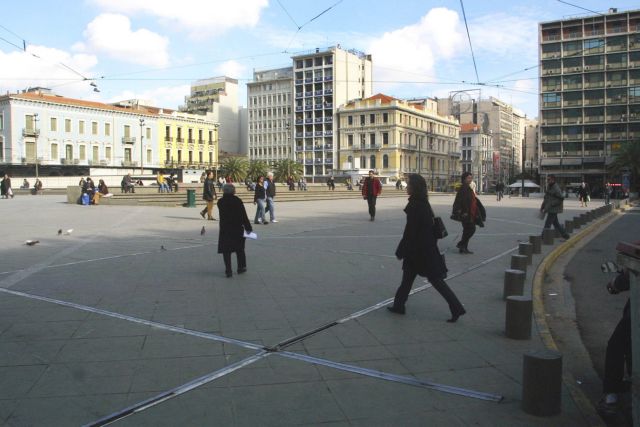 One can well understand the reasons why the government stressed the issue of security at universities and in the neighbourhood of Exarheia.In Exarheia and at universities one has seen the most glaring examples of lawlessness.

Hence, the government wants to transform these two loci of lawlessness into an example of peaceful everyday life.
As Ta Nea reports, however, the problem involves the broader Athens city centre.

Lesser and greater crimes are occurring in central Athens and are battering residents and businesses.

Dozens of automobiles around Omonia and Kaniggos Squares and in Thiseio have been targeted. Police that patrol these areas have proven unable to address the problem.

Yet the issue must be confronted immediately. It is inconceivble for the centre of a capital to be handed over to criminals.

Residents and businessmen cannot live in a state of terror.

That is not because the city centre is a showcase but rather because it is the gauge of the city’s vibrancy or decline.

At long last the capital must be allowed to flourish and a secure city centre is a precondition for that.

TANEA Team 17 Σεπτεμβρίου 2019 | 23:08
Share
Δείτε επίσης
Περισσότερα άρθρα για Αγγλική έκδοση
Foreign media have even compared the government with Greece’s seven-year military junta Editorial: A necessary cleanup
Citizens have demonstrated they need of state support Editorial: The need for a steady social benefits policy
In the first phase of the pandemic the correct decisions were taken Editorial: Vigilance needed in dealing with Covid-19
Greek side is obliged to be, as it is, in a constant state of readiness Editorial: Composure
In the long term, liberal democracy is “condemned” to win Editorial: A serious mistake
The PM stressed that the tapping was legal Mitsotakis denies prior knowledge of phone tapping of Androulakis, pledges reform, tight oversight of EYP
Resignations are not enough, nor would a cabinet reshuffle or snap election suffice Editorial: Transparency now!
Citizens seek persuasive solutions to the problems of daily life Editorial: Restoring trust in political parties
Last year in Greece there were 17 femicides Editorial: An urgent wake-up call
Stavros Psycharis never allowed himself to become subjugated. He never censored. Editorial: The death of a journalist
Psycharis He began his long career at the Lambrakis Press in 1972 Renowned journalist, publisher, entrepreneur Stavros Psycharis has died age 77
It is inconceivable for the average citizen to be defenceless amidst major economic trials Editorial: A model programme
Greece now has experience and an enhanced plan of deterrence Editorial Ta Nea: Maintaining composure
'I truly feel that the future of humanity is dark' God at Ground Zero: How a Mount Athos monk fit 9/11 into Byzantine iconography
Hatzidimitriou shattered the stereotype that women are not good at maths Editorial: Worthy role Models