On 28 September, 2013, ten days after Fyssas was murdered, To Vima  had reported that Patelis was being closely scrutinised by Greek Police considerably earlier for another criminal attack in Keratsini (where Fyssas was murdered). 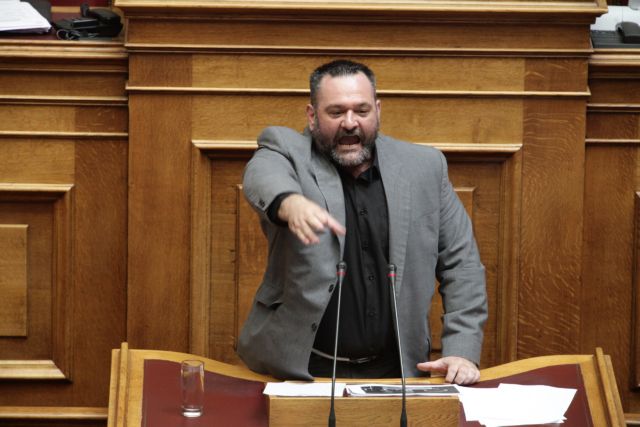 Yorgos Patelis, the former leader of the strong Nikaia cell of the paramilitary branch of Golden Dawn, which was responsible for the mobilisation of the neo-Nazi party’s storm troopers who murdered anti-fascist rapper Pavlos Fyssas, today told the judge at his trial that he had nothing to do with the murder.

“I did not put anyone up to committing murder. I am truly sad about where that young man (Fyssas) ended up. I condemn what happened. They threw me in jail like a piece of garbage. When (confessed murderer Yorgos) Roupakias called me and said he had knifed someone I told him ‘go cut your throat’,” Patelis told the court today.

Nikaia had Golden Dawn’s most organised and violent assault battalions which have been implicated in murder, blackmail, and protection rackets.

When Fyssas was murdered in September, 2013, then public order minister Nikos Dendias had ordered broad surveillance of the group, the members of which were soon in a panic and communicated extensively by telephone.

On 28 September, 2013, ten days after Fyssas was murdered, To Vima  had reported that Patelis was being closely scrutinised by Greek Police considerably earlier for another criminal attack in Keratsini (where Fyssas was murdered).

The probe indicated that the Nikaia assault battalion was used a “joker” or a select group that participated in Golden Dawn attacks both in Attica and outside.

In that probe, incriminating evidence had been found about murders in Petralona and Keratsini , a bomb attack in Volos, and other Golden Dawn attacks in Halkida and Aitoloakarnania, To Vima had reported.

A high-level Greek police source had told the newspaper that, “Many from the Nikaia cell, exploiting their putative strength, were selling protection to Greeks and foreigners. In the name of bolstering Golden Dawn they turned into gangs of blackmailers who ravaged the area.”

Patelis told the court’s presiding judge, Maria Lepenioti, that he joined Golden Dawn after attending a commemoration of the death of three helicopter pilots in the 1996 Imia crisis.

“I heard a number of speeches about the fatherland and Greeks and people singing the national anthem. I started meeting Golden Dawn guys on Facebook,” Patelis said.

Patelis admitted that when he contacted the members of the assault battalion to descend on Fyssas after the rapper had argued with some Golden Dawn members at a café, he had written that it was on orders from MP Yannis Lagos (photo), who was the top Golden Dawn man in Piraeus.

Lagos is May was elected to the European Parliament.

Today he covered for Lagos and said that the former MP had not issued the order and that he used Lagos’ name to underscore the urgency of the mobilisation and to get more Golden Dawn members to come.

However Patelis and Lagos had eight telephone conversations the night of Fyssas' murder.

“I have nothing to do with Nazism. That SS (Hitler’s paramilitary  Schutzstaffel) flag that appears in a picture was sent to me via Kostas Korkovilis,” Patelis said, asserting also that his Nazi salute was actually an ancient Greek salute used by Greek dictator Ioannis Metaxas in the 1930’s.

Patelis said that the night of Fyssas’ murder he was at the Golden Dawn local branch office.

“Roupakias (who initially denied any connection to Golden Dawn) was simply an active member. I had sent him to Mesegeion Avenue to pick up t-shirts. He and his family, his children and wife) would help us out. They helped just like everyone helped,” Patelis said.

A few hours earlier Lagos had told him party leader Nikos Michaloliakos would be visiting.

Patelis said he sent Roupakias to Peristeri to pick up flyers for the speech and that Roupakias called at 22:30 -23:00 and said he had the flyers.

Παγκόσμιες συγκρούσεις αναμένει το Ρωσικό Συμβούλιο Διεθνών Σχέσεων – Τι αναφέρει σε έκθεσή του
TANEA Team 17 Ιουλίου 2019 | 18:36
Δείτε επίσης
Περισσότερα άρθρα για Αγγλική έκδοση
The president-elect of Greece has won people over even before assuming office Editorial: Modesty
Marinakis just dealt the final blow to the so-called ‘clean-up’ of Greek Football in front of UEFA/FIFA
The dialogue Marinakis to Grammenos: «You have been doing anything that Savvidis was telling you for such a long time and now you’ve become sensitive?»
President-elect Ekaterini Sakellaropoulou symbolises Greece’s passage to a new era with greater consensus and less toxicity Editorial: A victory for democracy
'Our country is governed by the rule of law and is a force of stability, growth, and culture' President-elect Sakellaropoulou to focus on defending rights, sovereignty
Turkey’s provocations are non-stop Editorial: Audacity
Hospitals should not be excluded from public-private partnerships Editorial: Partnerships
The government in Tripoli has said that Greece 'has nothing substantial to offer'. Haftar in Athens, Greece to veto EU approval of Libya peace deal if MOU with Turkey not canceled
The nominee has the prestige and wherewithal to serve the office in a worthy manner Editorial: Consensus
The last president who was not a politician was Christos Sartzetakis who served between 1985-1990 In historic move, Mitsotakis taps Council of State chief to serve as first woman president
Realism at all levels and in every way must be the only guide Editorial: Realism
Greece cannot be punished ad infinitum for the errors of the past Lower primary surplus targets key to Greek economic growth
Indian slaves swap life of bondage for seat in boardroom at tea plantation
Editorial NEA: Puzzle
EU resumes probe into Boeing-Embraer deal, sets new April 30 deadline