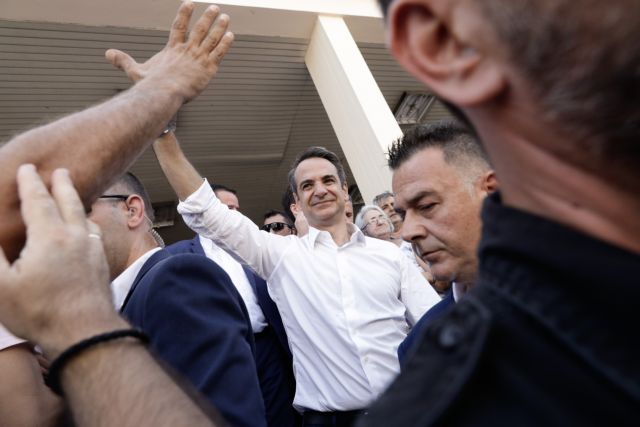 New Democracy has garnered a solid parliamentary majority according to exit polls that give Greece’s conservative party a landslide 12 percentage point lead over left-wing SYRIZA.

New Democracy leader Kyriakos Mitsotakis is scheduled to be sworn in as Prime Minister by President Prokopis Pavlopoulos at the Presidential Mansion at 1pm tomorrow, 8 July.

Prime Minister Alexis Tsipras has called Mitsotakis to congratulate him and they will meet at the PM’s Maximos Mansion offices tomorrow immediately after the swearing in ceremony for a formal handover of power.

Despite its stinging defeat, SYRIZA appears to have garnrered a around 30 percent of the vote, cementing a two-party hegemony in Greeek politics.

The exit poll indicates that neo-Nazi Golden Dawn with 2.96 percent of the vote is slightly short of the three percent threshold for entering parliament.

If Golden Dawn manages to enter Parliament then New Democacy is expected to receive 154-155 seats.
The exit poll gave New Democracy between 38 percent and 42 percent of the vote.

SYRIZA received between 26.5 percent and 30.5 percent in the exit poll.

That means that the greatest spread between ND and SYRIZA could exceed 15 percent of the vote, whereas if SYRIZA reaches the high projection and ND gets the low projection the spread would be as low as 7.5 percent.

The Movement for Change places third in the exit poll with between 6% and 8% of the vote.

The Greek Communist Party (KKE) garnered between 5% and 7% of the vote in the exit poll.

The exit poll indicates that the centre-left Movement for Change, with between 6% and 8% of the vote- has barely retained the percentage it obtained in the 26 May European election.

Movement for Change MEP Eva Kaili was the first party cadre to suggest even before the final results that a leadership challenge may be in the offing.

TANEA Team 7 Ιουλίου 2019 | 21:45
Share
Δείτε επίσης
Περισσότερα άρθρα για Αγγλική έκδοση
Mario Draghi has a prominent position in the EU architecture Editorial: Alliance
After a certain point, the necessary caution is a matter of personal responsibility Editorial: COVID-19 and personal responsibility
Extremists still constitute a threat Editorial: Threat
A consciously responsible stance is needed Editorial: Maintaining COVID-19 alertness
The late PM Constantine Karamanlis famously said, 'We belong to the West' Editorial: Contradictions
The end of EU enhanced fiscal supervision signals the exit from the tunnel Editorial: Breakthroughs
Head of Greek Pomaks’ Association rips into Erdogan’s revisionist expansionism
All Greek governments since Andreas Papandreou's demanded the return of the Marbles Osborne: ‘Deal to be done’ on sharing Parthenon Marbles
All efforts toward a radical resolution of the refugee problem have failed Editorial: The end does not justify the means
France's centrist forces are rallying behind President Emmanuel Macron Editorial: The political centre
The Germans are returning, this time not to impose their will but to cooperate Editorial: Greece as a bridge between Western Balkans, EU
The demographic crisis must be managed swiftly Editorial: Demographic crisis
There was a Jewish presence in Thessaloniki even in antiquity, and the Apostle Paul preached in its synagogue Leon Saltiel: Glimmers of hope in battling Greek antisemitism
Investment will also play a pivotal role Editorial: The dynamic of the Greek economy
Universities will be given more control over their affairs Editorial: Reforms must be implemented swiftly