Mitsotakis has indicated that he is prepared to tap technocrats and individuals who are not members of the party to assume cabinet posts. 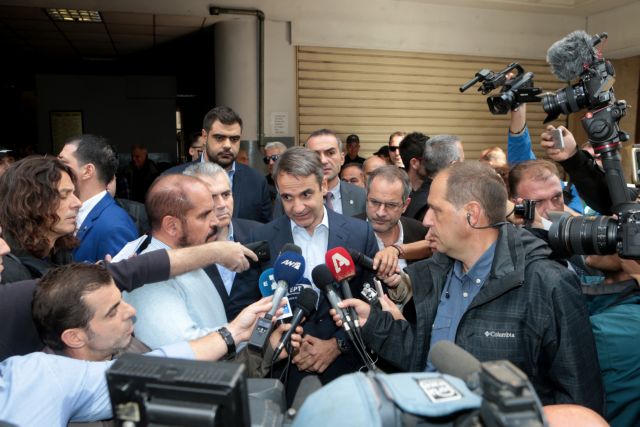 Main opposition New Democracy leader Kyriakos Mitsotakis is so certain that his party will garner an absolute parliamentary majority that he has announced that his government will be sworn in on July 9 and that he has already decided on who will fill all the cabinet posts,

Still, Mitsotakis is urging voters to hand him a strong mandate and he appears confident that he can persuade creditors and EU partners to remove one of the main obstacles to economic growth – which is none other than the high (3.5 percent of GDP) primary surplus target through 2022.

“It would be arrogant for me to tell voters that the election is over. What is at stake is a strong mandate and how many parties will enter Parliament,” Mitsotakis told ANT1 television right before the 7 July general election.

The greater the aggregate percentage of the vote of parties that fail to pass the three percent threshold to enter Parliament, the lower the percentage that ND will need to clinch a parliamentary majority and single-party rule.

Over the last days Mitsotakis has been repeating the mantra that no one will be laid off from the civil service, that pensions and auxiliary pensions will not be cut, that no social benefits will be cut, and that he will strictly enforce labour law to protect employees from arbitrary treatment.

That is to counter the argument of PM Alexis Tsipras and top SYRIZA cadres that will drastically pare back the social state and level labour rights like a steam roller.

“On election night I will have the greatest political capital and I shall have only one choice – not to squander it. I am requesting a strong mandate so that we may swiftly implement our plan,” Mitsotakis said.

“The government will be sworn in on Tuesday to allow time for the issuance of the necessary Presidential Decrees,” Mitsotakis said.

Ready to rule, ‘markets trust us’

Keen on persuading voters that he is ready to roll up his sleeves and hit the ground running, Mitsotakis said that he has already picked his entire cabinet, but he has stubbornly refused in a spate of interviews to reveal even the name of the next finance minister.

Many would place their bets on shadow finance minister Christos Staikouras. A former alternate economy minister in the government of Antonis Samaras, he is a mechanical engineer who holds a PhD in finance from the Cass Business School of the City University of London and an MBA from Imperial College.

Minister from outside the party as well      .

Mitsotakis has indicated that he is prepared to tap technocrats and individuals who are not members of the party to assume cabinet posts.

In that context, it is rumoured that former Pasok Minister Michalis Chrysohoidis may be given the Citizen’s Protection (public order) portfolio, a post in which in 2002 he played an instrumental role in rooting out the notorious 17 November terrorist organisation.

One of the main issues that has led many voters to ND at a time when there is a perception that violent crime is on the rise (particularly murders and robberies) is its law and order platform.

In negotiating with creditors, Mitsotakis’ top aim will be to shrink the hefty primary surplus targets.

“We must lower the surplus targets. We are called upon to restore our credibility… The markets already trust us and our debt will be paid off through growth and not through over-taxation. I believe I can persuade our partners on the issue of lowering the primary surplus,” he declared.

Mitsotakis said his first bill will involve restructuring key state services  - “the role of (ministry) general secretaries, the creation of a strong, independent Anti-Corruption Authority, setting the number of civil servants who can be transferred to another civil service post (usually to comfortable jobs at  MPs’ offices or ministries), the abolition of (university) asylum, and correction to the criminal code”.