Expected Mitsotakis victory welcomed by FAZ as opportunity for Greece

'If he wins, Kyriakos Mitsotakis will have to grapple with everything that Alexis Tsipras omitted: An almost bankrupt Public Power Corporation, a problematic public sector, and non-performing loans,' the German daily states in a news analysis. 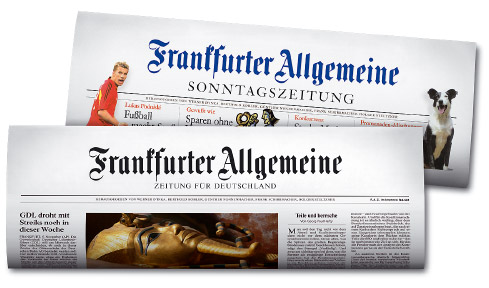 The German daily Frankfurter Allgemeine Zeitung opines that a Mitsotakis government could represent a new opportunity for Greek economic development.

“The elections on Sunday give Greece a new opportunity to radically improve the country’s economic situation. It should not remain unexploited…More than anything else Greece needs growth. Only in that way can it partly regain prosperity. Unfortunately, the Tsipras government did not contribute to regaining prosperity but instead, as (with past governments), made the distribution of civil service jobs and maintaining employee privileges at the Public Power Corporation a priority,” the news analysis stated.

“On the investment front, the results are disappointing. Extremely few are interested in investing because of the bad climate and the absence of a suitable framework. Without tourism the country would have been in deep depression. “

FAZ lavishes praise on Mitsotakis as a reformer and takes pains to distinguish his tenure from what it views as the irresponsible economic policies of former ND leader and prime minister Kostas Karamanlis, which it describes as disastrous.

“Kyriakos Mitsotakis is at once serious and a moderate reformer who is decisive about doing whatever he can for Greece to regain opportunities for growth. He is not among those in New Democracy who governed between 2004-2009 and who led the country with their irresponsible economic policy a step closer to catastrophe.”

“In the event that he wins, Kyriakos Mitsotakis will have to grapple with everything that Alexis Tsipras omitted: An almost bankrupt Public Power Corporation, a problematic public sector, and non-performing loans. To satisfy his voters the ND leader must swiftly proceed with tax cuts for which, however, there is no fiscal space. Time is of the essence for Greece to achieve long-term growth with costly reforms. That is Greece’s opportunity,” the report concludes.