EU leaders get tough on Turkey over Cyprus, order list of sanctions

'The European Council endorses the invitation to the Commission and the EEAS to submit options for appropriate measures without delay, including targeted measures,' the summit conclusions stated. 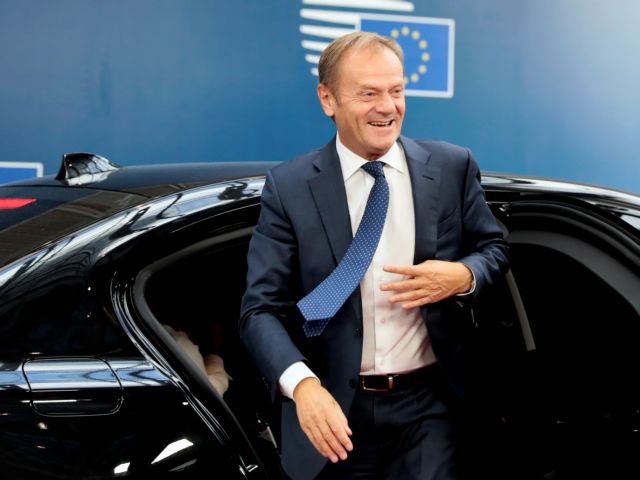 EU leaders at the June 20-21 summit called on the European Commission and the competent EEAS service to table “without delay” proposed sanctions against Turkey over its illegal drilling for hydrocarbons in the Exclusive Economic Zone (EEZ) of member-state Cyprus.

It also issued re-issued a warning about Ankara’s illegal activity in the Aegean.

“The European Council endorses the invitation to the Commission and the EEAS to submit options for appropriate measures without delay, including targeted measures,” the summit conclusions stated, formally adopting at the highest level the recommendations of the 18 June General Affairs Council.

The EEAS is the European Union's diplomatic service which assists the EU's foreign affairs chief in carrying out the Union's Common Foreign and Security Policy.

It is expected to present the Council with a list of possible “targeted measures” in the immediate future.

It also reaffirmed the decision of the 22 March, 2018, EU summit’s statement “strongly condemning Turkey's continued illegal actions in the Eastern Mediterranean and the Aegean Sea.”

The strongly worded warning and threat of sanctions was in part the result of Cyprus’ firm insistence on an issue concerning a direct violation of its sovereign rights (with the implicit but clear threat of further hostile actions) by candidate-country Turkey, the accession course of which has already effectively put on hold following the severe blows to the rule of law in Turkey after the failed coup against Erdogan in July, 2016.

The 27 EU leaders at the summit concluded that:

“The European Council expresses serious concerns over Turkey's current illegal drilling activities in the Eastern Mediterranean and deplores that Turkey has not yet responded to the EU's repeated calls to cease such activities. The European Council underlines the serious immediate negative impact that such illegal actions have across the range of EU-Turkey relations.”

“The EU will continue to closely monitor developments and stands ready to respond appropriately and in full solidarity with Cyprus. The European Council will remain seized of the matter and will revert accordingly. “

TANEA Team 21 Ιουνίου 2019 | 17:50
Share
Δείτε επίσης
Περισσότερα άρθρα για Αγγλική έκδοση
Ankara is laying the groundwork for a feverish and tense summer Editorial: Responding to the challenge of Turkish provocations
The new cadres are fresh faces without much experience in politics Editorial: A new generation at the helm in PASOK
The state also has a role to play and it must act quickly Editorial: Dealing with judicial delays
The US-Greece relationship is based on mutual respect Editorial: American vote of confidence in Greece
Turkey and Greece are moving in opposite directions Editorial: Turkey's dangerous games
The Ukrainians are fighting on home turf and have very high morale Dinner with Zelensky: the character of a Ukrainian hero
The PM is also mulling a substantial cabinet reshuffle Mitsotakis no longer rules out early elections, possible autumn dates floated
Editorial: A scourge at our schools
When time is of the essence, the government has a duty to act Editorial: It is high time for reforms
Mitsotakis underlined Greece’s crucial geostrategic position PM Kyriakos Mitsotakis’ historic speech to Joint Session of US Congress (full text)
A party without self-criticism and renewal cannot move forward Editorial: Political parties transforming
Greece’s role as an energy hub must be emphasised Editorial: Opportunities
Mitsotakis-Biden talks: Greek-Turkish relations, the war in Ukraine, wayward Turkey’s new role in NATO
It is not in Greece’s interest for Turkey to be isolated or humiliated Editorial: Opportunity
The Marshall Plan prioritised rebuilding export capacity How should a Marshall Plan for Ukraine work?