Anarchist supporters of terrorist Koufodinas vandalise US Embassy in Athens,

'Kalimera, I woke up to more childish vandalism this morning outside the residence and will continue to work with Greek authori.ties to punish the culprits according to law,' US Ambassador Geoffrey Pyatt said in a tweet. 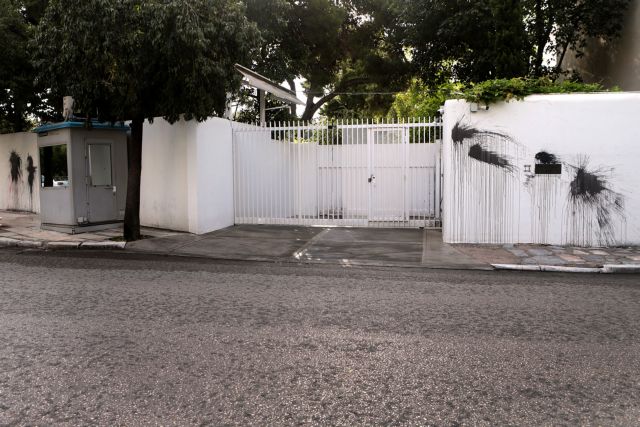 For the second time in less than five months the anarchist group Rouvikonas has carried out an act of vandalism at the US Embassy in Athens, this time due to the refusal of a Greek prosecutor to approve the seventh furlough of the now defunct N17 terrorist organisation’s top gun Dimitris Koufodinas, who is serving 11 life sentences for as many murders.

Koufodinas has been on a hunger strike since 2 May, after his seventh consecutive furlough was denied.

The US Embassy and Greek opposition parties each time issued a public denunciation of the furloughs.

US Ambassador Geoffrey Pyatt played down the attack as “childish vanadalism”.

“Kalimera, I woke up to more childish vandalism this morning outside the residence and will continue to work with Greek authorities to punish the culprits according to law. Destruction of property is not peaceful protest,” Pyatt tweeted this morning at 8:06am.

Initial reports indicated that 10 individuals approached the residence, which is supposed to be one of the best guarded buildings in Athens, and threw paint and a smoke grenade at a distance from the residence.

There is a bullet proof guard post exactly at the spot of the foray but no one came out. It is unclear if there was a police guard inside.

Eight individuals were immediately tracked down and remanded in custody by Greek police.

Solidarity for a terrorist

Today’s attack was similar in terms of the modus operandi to a paint attack near the side garage of the embassy on 6 January, 2019, when Rouvikonas assumed responsibility for the attack and cited as the cause US “imperialism”, the decline of US power in a multi-polar world , and Washington’s supposed abandonment of its Kurdish allies in Syria.

The trail of blood

However, today’s foray struck directly at the security of the US Embassy and American diplomats as it was linked to the horror of the murder of five US diplomats.

Rouvikonas on a well-known anarchist website declared that it conducted the foray to protest alleged US interference as the reason that Koufodinas was denied his seventh consecutive furlough, which is allowed by current Greek law.

Master Sergeant Robert H. Judd of JUSMAGG (Joint United States Military Aid Group to Greece), who was on a mail run, narrowly escaped being killed when he switched lanes and stepped on the gas.

TANEA Team 15 Μαΐου 2019 | 17:46
Share
Δείτε επίσης
Περισσότερα άρθρα για Αγγλική έκδοση
Mr. Biden is called upon to achieve a total comeback of America Editorial: Pursuing a US comeback
The president spoke forcefully about the 6 January Capitol siege National unity the focus inaugural address as Biden is sworn in as 46th president of deeply divided country
At the core of the Greek #MeToo movement lies a problem that affects both women and men - the abuse of power. Editorial: To the very end
Λογαριασμός τίτλου
There are about six months to go until summer, by which time herd immunity is expected to be achieved Editorial: Pursuing an EU-wide travel certificate
Editorial: Pursuing an EU-wide travel certificate
Small steps are usually the greatest ones. Combined, they lay the groundwork for a new era Editorial: Tax reform
The talks began in 2002, when Pasok's Costas Simitis was PM and George Papandreou was foreign minister Greek-Turkish exploratory talks to resume on 25 January amidst international pressures
The return to normalcy is the greatest challenge confronting the incoming president Editorial: Normalcy
The framework for protests aims to deepen law enforcement while limiting deviant acting out Editorial: Strategy
Editorial: Restart
Editorial: Details
Editorial: The need for stability
Europeans hope to reclaim their lives with huge EU COVID-19 vaccination rollout
Greece begins COVID-19 vaccination with top officials as nearly 10,000 Pfizer vaccines trickle in