Prime Minister Alexis Tsipras told the Financial Times in an interview that he is not going to base his electoral campaign on charity or handouts. 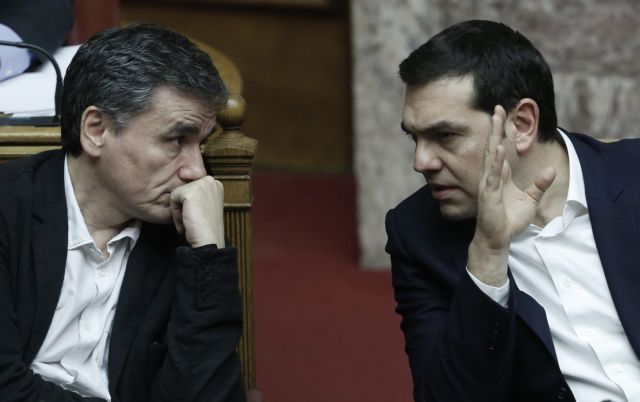 Prime Minister Alexis Tsipras told the Financial Times in an interview that he is not going to base his electoral campaign on charity or handouts.

Finance Minister Euclid Tsakalotos maintains that the country - obviously thanks to him – regained its credibility among European partners and creditors.

The PM and his minister met yesterday to decide on a new batch of social benefits and handouts.

The issue is not the contrast between words and deeds. This government pledged much that it did not do and did much that it had not told us about. Still, one cannot but note its obsession with the sterile policy of benefits and pledges to everyone, with zero results.

Its persistence in this can be explained. Fearing a Waterloo in the upcoming elections, it is struggling to find a life vest, but just as a life vest cannot save someone lost in the middle of the ocean, so too handouts cannot save a government that is sinking.

The government’s stance is not based on logical and solid foundations.

In reality, the public is not in the least swayed by its benefits and handouts. Yet, the government insists on pursuing its futile strategy.

TANEA Team 25 Απριλίου 2019 | 14:56
Share
Δείτε επίσης
Περισσότερα άρθρα για Αγγλική έκδοση
Erdogan has no right to threaten and blackmail Editorial: The message
There is a danger of the war being viewed as something normal Editorial: Taking measures
Athens' objective was to avert concessions that might affect Greek interests Greece, Turkey declare their satisfaction with results of NATO summit
What is at stake is the strategic depth of the Alliance Editorial: A crucial NATO summit
European supervised drug consumption sites have been an inextricable part of drug treatment Editorial: The first step
The overturning of Roe v. Wade turns the clock back 50 years for American women. Editorial: Back and forth
Thymios' statement - “I no longer trust people.” – is a punch in the gut. Editorial: A punch in the gut
Editorial: Audits of politicians' wealth
Mario Draghi has a prominent position in the EU architecture Editorial: Alliance
After a certain point, the necessary caution is a matter of personal responsibility Editorial: COVID-19 and personal responsibility
Extremists still constitute a threat Editorial: Threat
A consciously responsible stance is needed Editorial: Maintaining COVID-19 alertness
The late PM Constantine Karamanlis famously said, 'We belong to the West' Editorial: Contradictions
The end of EU enhanced fiscal supervision signals the exit from the tunnel Editorial: Breakthroughs
Head of Greek Pomaks’ Association rips into Erdogan’s revisionist expansionism