Tsipras’ intervention at yesterday’s extraordinary EU summit on Brexit was revealed in a report by Bloomberg, which underlined that the Greek PM flipped the result of the referendum in July, 2015, 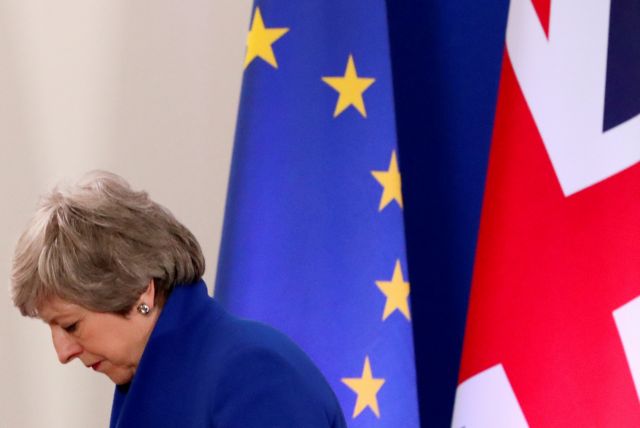 Tsipras has told his EU counterparts that if a Brexit deal is not concluded before the European Parliament elections in May then the UK will have to hold EU elections as well, an eventuality that would deal a severe blow to Brexiteers and leave room for scrapping Brexit altogether.

Tsipras’ intervention at yesterday’s extraordinary EU summit on Brexit was revealed in a report by Bloomberg, which underlined that the Greek PM flipped the result of the referendum in July, 2015, on accepting or rejecting the EU’s deal on the third bailout programme.

The rejection of the deal by voters was reversed by Tsipras after a grueling 17-hour meeting with EU partners. He later said he accepted the bailout deal in order to avert a likely Grexit that would push the country to the edge of the abyss.

The bailout deal in Greece was passed by Parliament in August, 2015, with the backing of main opposition New Democracy, which appeared prepared to accept any deal the EU offered in order to avoid a disaster.

The reversal was not apparently excused by voters, who in September, 2015, voted SYRIZA into office in the second general election in one year.

The support of the opposition was necessary as many SYRIZA MPs pushed for a rejection of the deal and ended up leaving the party after the reversal of the no vote in the referendum.

“This will be the greatest defeat of Brexiteers, and maybe even the beginning of the end for Brexit,” Bloomberg quoted Tsipras as saying, citing a transcript of his intervention shared by diplomats familiar with the matter.

Indeed, he went as far as to urge the other leaders to consider backing moves that would allow Britain to remain in the Union.

“One thing in common between Greece and the U.K. is that in both cases there is a strong core of EU supporters, and Tsipras told EU leaders they can’t ignore the six million voters who signed a petition to remain in the EU,” Bloomberg noted.

TANEA Team 11 Απριλίου 2019 | 16:51
Share
Δείτε επίσης
Περισσότερα άρθρα για Αγγλική έκδοση
There is a danger of the war being viewed as something normal Editorial: Taking measures
Athens' objective was to avert concessions that might affect Greek interests Greece, Turkey declare their satisfaction with results of NATO summit
What is at stake is the strategic depth of the Alliance Editorial: A crucial NATO summit
European supervised drug consumption sites have been an inextricable part of drug treatment Editorial: The first step
The overturning of Roe v. Wade turns the clock back 50 years for American women. Editorial: Back and forth
Thymios' statement - “I no longer trust people.” – is a punch in the gut. Editorial: A punch in the gut
Editorial: Audits of politicians' wealth
Mario Draghi has a prominent position in the EU architecture Editorial: Alliance
After a certain point, the necessary caution is a matter of personal responsibility Editorial: COVID-19 and personal responsibility
Extremists still constitute a threat Editorial: Threat
A consciously responsible stance is needed Editorial: Maintaining COVID-19 alertness
The late PM Constantine Karamanlis famously said, 'We belong to the West' Editorial: Contradictions
The end of EU enhanced fiscal supervision signals the exit from the tunnel Editorial: Breakthroughs
Head of Greek Pomaks’ Association rips into Erdogan’s revisionist expansionism
All Greek governments since Andreas Papandreou's demanded the return of the Marbles Osborne: ‘Deal to be done’ on sharing Parthenon Marbles