Aside from energy security, enhanced energy and military cooperation between the three countries and the broader geostrategic setting were high on the agenda. 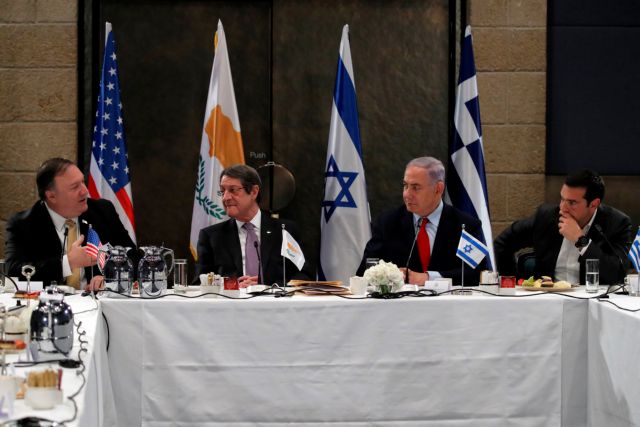 A three-way summit between Cyprus, Greece, and Israel with the participation of US Secretary of State Mike Pompeo sent a strong message to Ankara regarding energy security and its hostile behaviour in the Eastern Mediterranean.

Israeli Prime Minister Benjamin Netanyahu, the President of Cyprus Nikos Anastasiades, and PM Alexis Tsipras, and Pompeo issued a joint statement with a thinly veiled reference to Turkey as a 'malign influence".

The joint statement is as follows:

"The governments of the United States, the State of Israel, the Hellenic Republic, and the Republic of Cyprus met today in Jerusalem to affirm their shared commitment to promoting peace, stability, security, and prosperity in the Eastern Mediterranean region. Secretary Pompeo underlined U.S. support for the trilateral mechanism established by Israel, Greece, and Cyprus, noting the importance of increased cooperation. The leaders agreed to increase regional cooperation; to support energy independence and security; and to defend against external malign influences in the Eastern Mediterranean and the broader Middle East. They welcomed the recent natural gas find in the Eastern Mediterranean and its potential to contribute to energy security and diversification."

As the Athens daily Ta Nea reported, the US supports the involvement of the Public Gas Corporation of Greece,  Edison, and ExxonMobil in the Eastmed pipeline investment scheme to transport Israeli and eventually Cypriot gas to Europe via Cyprus and Greece.

As Cyprus’ Sigma Live reported, the meeting of the three leaders in the presence of the US Secretary of State was followed by expanded talks with the participation of the energy and foreign ministers.

Afterwards the three countries’ teams held expanded talks with the participation of Pompeo.

Anastasiades will was to hold bilateral talks with Pompeo.

The meeting in Jerusalem is one of the stops on Pompeo’s regional trip.

Aside from energy security, enhanced energy and military cooperation between the three countries and the broader geostrategic setting – with Cyprus and Greece playing an exceptionally upgraded role on the regional energy map -were high on the agenda.

According to Israel’s Ambassador to Cyprus, Sammy Revel, Pompeo’s participation “constitutes a strong indication of support for the three-way framework and the increased cooperation between our countries”.

TANEA Team 20 Μαρτίου 2019 | 19:26
Share
Δείτε επίσης
Περισσότερα άρθρα για Αγγλική έκδοση
If Syriza believes it can garner political gains with daily political transformations it is sorely mistaken Editorial: Political vertigo
Santander Consumer Finance begins activities in Greece
Evangelos Marinakis: Post-Covid Shipping and the Environment – Green Energy Investments
The US ambassador says Biden has “opened up a new vocabulary of cooperation” with Greece Pyatt see deeper US-Greece strategic ties under Biden administration
The case will be re-tried in the framework now set by the Council of State Bombshell Council of State ruling accepts state’s vaccine side-effect liability
May Day should be honoured with a single march each year Editorial: Unity
Transcending the collective crisis will require leadership and not troublemakers Editorial: Messages
After a six-month shutdown, workers in the restaurant business laid the tables Editorial: The first step
The government has repeatedly said that the existing framework is outdated Battle royal looms over government bill overhauling labour relations, limiting strike action
The labour trade union movement is an invaluable and irreplaceable weapon of workers An urgent need for the rebirth of the trade union movement
Editorial: The pendulum of American politics
The thirty-somethings rushed to be vaccinated for the sake of their families and their friends Editorial: Front-and-centre
The parliamentary vote on approval of the plan’s implementation is expected before Easter Editorial: Liquidity
Turkey is keenly aware of the fact that there is a new player on the geopolitical chessboard Editorial: A just act
Biden takes historic step to recognise Armenian Genocide