'The dark face of the Tsipras administration casts a heavy shadow on our democracy because when the judiciary is used as a tool for political prosecution democracy is imperiled'. 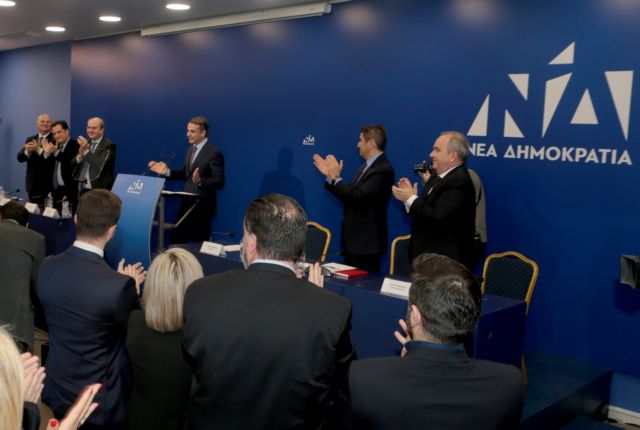 New Democracy leader Kyriakos Mitsotakis called on his party’s Political Committee today to work toward creating a common progressive front that can work toward economic recovery and protect state institutions – including the judiciary – the independence of which SYRIZA has undermined according to ND.

Mitsotakis once again called for immediate elections, as he has so many times over the past few years, asserting that Prime Minister Alexis Tsipras and SYRIZA will destroy the country if they complete their term in office.

“Democracy means elections. Just as SYRIZA came to power through elections, so too it will leave power after elections…The dark face of the Tsipras administration casts a heavy shadow on our democracy because when the judiciary is used as a tool for political prosecution democracy is imperiled. When convicted and unrepentant terrorists with the tolerance of the government take provocative strolls in central Athens, possibly plotting their next strike, that injures democracy,” the ND leader said.

Mitsotakis said that the government organised a conspiracy to implicate its political opponents – including former PM Antonis Samaras and ex-ministers of ND – in the Novartis scandal.

“Our country needs a strong government that can ensure stability, security and prosperity for all Greeks.”

Mitsotakis declared that Tsipras should either seek a vote of confidence in parliament or call elections immediately.

Mitsotakis also attacked Defence Minister Panos Kammenos saying that the defence minister should have pulled out of the government months ago if he really wanted to block ratification of the Greece-FYROM Prespa Agreement. By not doing so, he gave Tsipras the pen to sign it, Mitsotakis said.

TANEA Team 9 Ιανουαρίου 2019 | 22:46
Share
Δείτε επίσης
Περισσότερα άρθρα για Αγγλική έκδοση
European supervised drug consumption sites have been an inextricable part of drug treatment Editorial: The first step
The overturning of Roe v. Wade turns the clock back 50 years for American women. Editorial: Back and forth
Thymios' statement - “I no longer trust people.” – is a punch in the gut. Editorial: A punch in the gut
Editorial: Audits of politicians' wealth
Mario Draghi has a prominent position in the EU architecture Editorial: Alliance
After a certain point, the necessary caution is a matter of personal responsibility Editorial: COVID-19 and personal responsibility
Extremists still constitute a threat Editorial: Threat
A consciously responsible stance is needed Editorial: Maintaining COVID-19 alertness
The late PM Constantine Karamanlis famously said, 'We belong to the West' Editorial: Contradictions
The end of EU enhanced fiscal supervision signals the exit from the tunnel Editorial: Breakthroughs
Head of Greek Pomaks’ Association rips into Erdogan’s revisionist expansionism
All Greek governments since Andreas Papandreou's demanded the return of the Marbles Osborne: ‘Deal to be done’ on sharing Parthenon Marbles
All efforts toward a radical resolution of the refugee problem have failed Editorial: The end does not justify the means
France's centrist forces are rallying behind President Emmanuel Macron Editorial: The political centre
The Germans are returning, this time not to impose their will but to cooperate Editorial: Greece as a bridge between Western Balkans, EU