Days before constitutional amendments are to be approved, Zaev defends Prespa Accord

As for the accord’s recognition of a “Macedonian language”, Zaev said that there is already a UN decision clarifying that FYROM’s language belongs to the family of South Slavic languages. 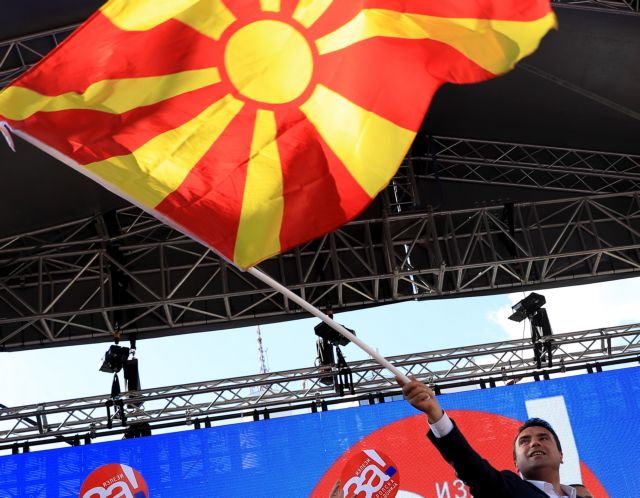 FYROM Prime Minister Zoran Zaev is trying to allay concerns and fears domestically and in Greece about the Prespa Agreement, which will change his country’s name to Republic of North Macedonia and remove irredentist references from the Constitution of FYROM.

Zaev has offered assurances – in an effort to calm Greek fears of backpedaling - that the agreement cannot change in the future.

Moreover, he denounced the specious links between the history of his country’s Slavo-Macedonian majority (the Albanian element is over 25 percent of the population) and Hellenistic antiquity, drawn by his ultra-nationalist predecessor Nikola Gruevski, who erected statues of Alexander the Great and renamed streets and the capital’s airport in his honour.

Zaev said his country has paid a heavy price for that policy in the past (due to Greece’s refusal to acquiesce to Skopje’s Nato entry and EU accession talks) and that it will not repeat the same mistakes in the future.

Despite President Gjorge Ivanov’s staunch opposition, Zaev expressed confidence that the constitutional amendments mandated by the Prespa Agreement will be definitively approved in the third and final parliamentary vote in the coming days.

Zaev said that he and PM Alexis Tsipras ignored the heavy cost of passing the agreement – as large majorities in both countries oppose it – and concluded an agreement which will have only positive repercussions for both countries.

He underlined that a change to one amendment, made after Greek remonstrance, clarifies that the accord refers to nationality (“Macedonian/citizen of the Republic of North Macedonia) and not ethnicity.

As for Russia’s intense objections to FYROM being admitted to Nato, Zaev said that the agreement is not directed against any other country and that its sole aim is to ensure peace and stability.

As for the accord’s recognition of a “Macedonian language”, Zaev said that there is already a UN decision clarifying that FYROM’s language belongs to the family of South Slavic languages.

The main cause of the Greek public’s strong opposition to the accord is its recognition of a Macedonian nationality and language, because that could be used by Skopje in the future to pose an exclusive claim to Macedonian identity.

Indeed, Zaev intimated that his country could face existential threats if it is not anchored in Nato and the EU.

TANEA Team 4 Ιανουαρίου 2019 | 13:54
Share
Δείτε επίσης
Περισσότερα άρθρα για Αγγλική έκδοση
Editorial: Barbarity
In times of tensions military service is viewed as a national duty Editorial: Incentives for early military service
An emotional start in taking a position on developments in the region would be catastrophic Editorial: A measured response to Israeli-Palestinian conflict
The alternate interior minister said problems with COVID-19 self-tests will be resolved by the end of May Government poised to abolish mandatory SMD to leave home, working to solve self-test problems
If Syriza believes it can garner political gains with daily political transformations it is sorely mistaken Editorial: Political vertigo
Santander Consumer Finance begins activities in Greece
Evangelos Marinakis: Post-Covid Shipping and the Environment – Green Energy Investments
The US ambassador says Biden has “opened up a new vocabulary of cooperation” with Greece Pyatt see deeper US-Greece strategic ties under Biden administration
The case will be re-tried in the framework now set by the Council of State Bombshell Council of State ruling accepts state’s vaccine side-effect liability
May Day should be honoured with a single march each year Editorial: Unity
Transcending the collective crisis will require leadership and not troublemakers Editorial: Messages
After a six-month shutdown, workers in the restaurant business laid the tables Editorial: The first step
The government has repeatedly said that the existing framework is outdated Battle royal looms over government bill overhauling labour relations, limiting strike action
The labour trade union movement is an invaluable and irreplaceable weapon of workers An urgent need for the rebirth of the trade union movement
Editorial: The pendulum of American politics