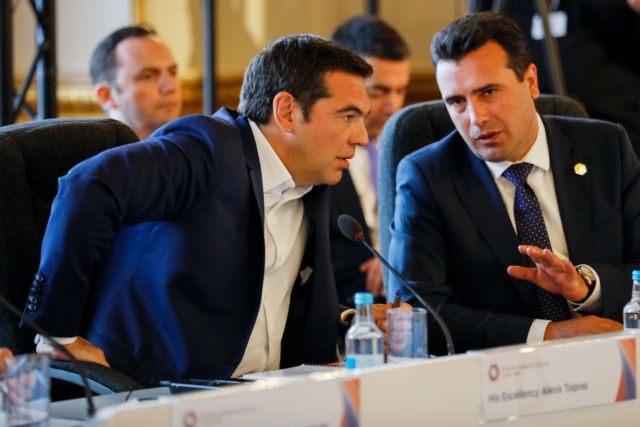 When Slavo-Macedonian citizens of FYROM (about one-third are ethnic Albanians) refer to “Macedonians of the Aegean”, they refer directly to an irredentist tradition that views the geographically largest part of Macedonia, which is the northern province of Greece, as an unliberated territory, essentially as a Greek-occupied part of their country.

Consequently, when FYROM’s Prime Minister Zoran Zaev used the phrase as part of his strategy to shepherd through Parliament the Greece-FYROM agreement and persuade even more MPs to vote for the Constitutional amendments mandated by the accord, his remarks set off alarm bells and stirred deep consternation in Athens.

Moreover, Zaev spoke of the prospect of the “Macedonian language”, which is specifically designated as such by the accord, being taught in northern Greece, presumably in state schools, which is another violation of the agreement, and specifically of the provision that Skopje will have no right to intervene in any manner in domestic Greek affairs.

President Prokopis Pavlopoulos was the first Greek state or government official to respond to what all Greek political parties viewed as a provocation on Zaev’ s part.

Pavlopoulos invoked the Greek saying that “good accounting makes for good friends”.  “We are here, but we are not disposed to make exceptions on such issues.”

The Greek President said that when the accord is tabled in the Greek Parliament, “We will under no circumstances accept arbitrary interpretations, and especially irredentist ones, of the Prespa Agreement on the part of FYROM.

Some analysts on the Greek side believe that Zaev’s statements (which Athens says violate the framework of the accord) ahead of the third and final vote ratifying the Constitutional amendments, are due to the pressure he is under in his efforts to secure the requisite two-thirds parliamentary majority, or 80 seats.

Sources say that the eight MPs of the nationalist VMRO-DPMNE party who have voted for the amendments in the first vote are seeking a quid pro quo to do the same in the crucial third and final vote. That includes the dropping of criminal charges against VMRO MPs who violently stormed the parliament in April, 2017, when they tried to block Zaev from forming a government, after a decade of VMRO rule.

The office of Greek Prime Minister Alexis has indicated through leaks that Athens has written to UN mediator Matthew Nimetz to protest actions that violate the letter and spirit of the accord, and that Tsipras has called Zaev to ask him to refrain from statements that could blow the Prespa Agreement out of the water.

According to diplomatic sources, Nimetz has already contacted Zaev regarding the matter.

Because the agreement is hugely unpopular in Greece, garnering the simple majority to ratify the agreement in the Greek Parliament, the last step before it takes effect, is already a difficult feat that will require support from non-government parties. References to “Macedonians of the Aegean” and to the teaching of “Macedonian” in northern Greece will make it inordinately more difficult.