Ζωή & Τέχνες Υγεία Γυναίκα Παιδί Πρόσωπα & Ιστορίες Συνεντεύξεις Auto Νέα Σκίτσα Info graphics Media Market
tanea.gr > Αγγλική έκδοση > You paid a heavy price for eros, my dear Khashoggi
You harboured the delusion that they would not dare to harm you, with such a famed surname

You paid a heavy price for eros, my dear Khashoggi

Why on earth did you want to step into that trap, Jamal? Did you perhaps figure that your friendship with Erdogan would protect you?  Did you calculate – rightly – that if they kidnapped you, not to mention murdered you, that that would harm the Saudi Arabian regime more than it would benefit it? 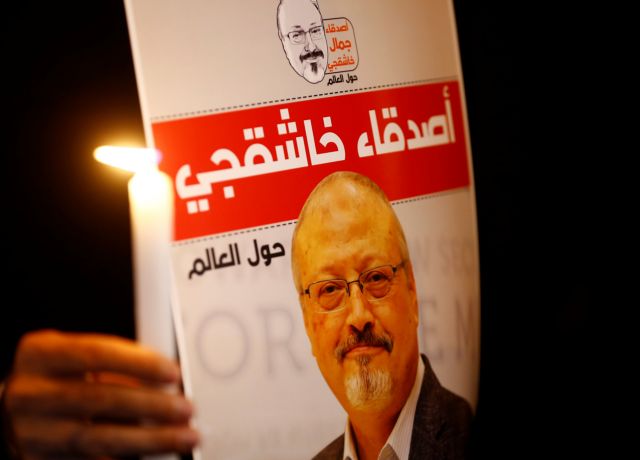 “You paid a heavy price for eros, my dear Khashoggi” I would say, paraphrasing the Macedonian Greek song about Vasiliki, who gave herself over to Stergios, only to commit suicide in a Veria psychiatric clinic.

What relation – you might ask - could there be between a gorgeous young woman and a 60-year-old journalist? The winged god’s arrow are poisonous in two age brackets – in puberty and when a person sees old age approaching rapidly, and is burning to make a final new beginning, to start from scratch..

Jamal Khashoggi had done so months ago. He had ruptured his relations with the Saudi Arabian regime. He had moved to America. He often criticised the crown prince, Mohammed bin Salman, known as MBS, a very close friend of Jared Kushner, the husband of Donald Trump’s daughter, one a Muslim and the other Jewish.

With his articles, Khashoggi flagellated the young prince - who took power by playing the moderniser, but soon proved to be more brutal than all his predecessors - and he established a reputation as possibly the strongest opposition voice. He called for a liberalisation of his country, and asked the international community to pressure in that direction.

He had definitively wrested himself from his shackles – or so he thought. He was madly in love with 36-year old Hadice Cengiz. They were planning to marry, to buy a lovely house on the Bosphorus, to blossom – and bear fruit, why not? – in Turkey.

Some formalities were the only obstacle to fulfiling their dreams. Jamal had to produce a divorce certificate, to prove that he had definitively separated from his former wife, in order to dress as up a groom once again. That’s how he visited, with the fear of God, the Consulate of Saudi Arabia in Istanbul. The first time they received him as he deserved – as a reputable citizen. “They have to mail the documents from Riyadh,” they told him. “It’s that darn bureaucracy…Would you be so kind as to come back next Tuesday?”

Jamal Khasoggi found that reasonable and consented. A wire was sent to Saudi Arabia, but instead of the registry preparing the necessary document, they sent a coroner equipped with a bone saw, the special kind for cutting people up – “dead people”, the producer should have made clear.

At dawn on 2 October, the coroner touched down in a private jet in Istanbul, accompanied by about 15 tough security agents. They made their way to the Consulate in order await Khashoggi there.

Why on earth did you want to step into that trap, Jamal? Did you perhaps figure that your friendship with Erdogan would protect you?  Did you calculate – rightly – that if they kidnapped you, not to mention murdered you, that that would harm the Saudi Arabian regime more than it would benefit it? Could you, a brilliant man, have naively believed that human relations are governed by logic?

That is inordinately worse, my friend. You harboured the delusion that they would not dare to harm you, with such a famed surname.

Jamal Khasoggi, a member of the highest level of the Saudi Arabian elite from birth. The nephew of Adnan Khashoggi, the most storied arms dealer in the second half of the 20th century. A cousin of Dodi Fayed, the last love of Diana. A journalist with stellar studies, and a spokesman, not so long ago, of the country in the West. Untouchable, due to lineage and background.

Did you not know how the law of Islam is enforced in your country? Had you not seen stonings and dismemberments in the public squares, heinous punishments for crimes much lighter than a betrayal of the throne, of which you were accused? Was it not you who fervently expressed solidarity with the people of Yemen, who were literally enslaved by the Saudi Arabian army? Was it not you who was who was livid about the continual incarceration of activists – even clergymen – who dared to speak up, even indirectly?

“But I am self-exiled in open, democratic societies…” you would have told me, avoiding out of modesty to invoke your name.

“For your own sake, I tell you! The consulate is Saudi territory!”  I would have answered you. Alas, eros would have covered over my words.

That morning, MBS personally called you. He asked you to return to the kingdom – “If you come back, we’ll let bygones be bygones,” he may have promised you. You flatly rejected his offer – “Does he think I’m a fool?” you wondered. Then you went straight into the mouth of the beast.

Does eros daze one?

I am thinking of your beloved. Hanging about the consulate for hours. Looking first at one and then at the other cell phone that you had left her, hoping in vain for a call, or even a message. Ringing the doorbell at the end –“Khashoggi? What Kashoggi? There is no such person in here,” the bored doorman answers.

I am thinking of the extra at the scene of your murder, who was ordered to wear your clothes and exit through the back door, so that the cameras would record him, and so that the scenario that Jamal Khashoggi left the consulate alive might appear convincing.

I imagine in a hair-raising flash your last moments. When exactly was that unbearable pain succeeded by your surprise that those filthy thugs dared to lift a hand against you? Did you have time to resist at all, to desperately defend yourself? Or did they drug you suddenly? Did they really dismember you alive? Why would they do something like that? We are dealing with a doctor here, not a maniacal butcher. I would not rule out that he detested you personally.

Your death, Jamal, brought an impressive political result. The powerful, who without complaint swallowed the camel of Yemen – thanks to commercial deals worth billions with the Saudis – are now straining out the gnat of your loss.

Erdogan is moving extremely cautiously so as to garner the greatest possible benefit, to promote his dream of leading the Muslim world.

Iran cannot believe this godsgend – which is the demonised country in the Middle East right now? Even President Trump says that he is exceptionally alarmed. He must have ordered his son-in-law to curtail his frequent contacts with MBS. At least temporarily.

Was your sacrifice worth it? Is your soul joyous if it exists somewhere? Don’t get me wrong, but I don’t take you to be a person who would willingly sacrifice himself for his principles. Who would go up in flames for the sake of the future of others. It was your freedom that you sought above all. That is why I tell you: You paid a heavy price for eros, my dear Khashoggi.

*  Christos Chomenidis is a novelist and contributor to Ta Nea

TANEA Team 30 Οκτωβρίου 2018 | 16:03
Share
Δείτε επίσης
Περισσότερα άρθρα για Αγγλική έκδοση
Mitsotakis underlined Greece’s crucial geostrategic position PM Kyriakos Mitsotakis’ historic speech to Joint Session of US Congress (full text)
A party without self-criticism and renewal cannot move forward Editorial: Political parties transforming
Greece’s role as an energy hub must be emphasised Editorial: Opportunities
Mitsotakis-Biden talks: Greek-Turkish relations, the war in Ukraine, wayward Turkey’s new role in NATO
It is not in Greece’s interest for Turkey to be isolated or humiliated Editorial: Opportunity
The Marshall Plan prioritised rebuilding export capacity How should a Marshall Plan for Ukraine work?
Drop in COVID-19 deaths - number of infections, intubated patients stable, hospital admissions rise
Policing of universities is an unpleasant but necessary measure Editorial: No excuse
A strict price inspections policy is needed to curb untrammelled price hikes Editorial: Dealing with inflation
Editorial: Axes
Ta Nea has repeatedly called for decisive action Editorial: University police force plan on the back burner
Everything depends on how the social media are used Editorial: Words
SYRIZA’s gains in 2012 were a Pyrrhic victory. Editorial: Populism
There will be a 600 euro cap on the rebate Amidst uproar over skyrocketing energy costs, Mitsotakis announces rebates for households
This is the 12th anniversary of the deadly arson attack Editorial: Radio silence