Ζωή & Τέχνες Υγεία Γυναίκα Παιδί Πρόσωπα & Ιστορίες Συνεντεύξεις Auto Νέα Σκίτσα Info graphics Media Market
tanea.gr > Αγγλική έκδοση > Varoufakis blasts Kammenos as a 'neo-fascistoid', says Soros called Tsipras to sack him
'Not only should they form an investigative committee, but let them court marshal me, if they dare,' he said of ND's plans for a probe

Varoufakis blasts Kammenos as a 'neo-fascistoid', says Soros called Tsipras to sack him

“When they want to sully someone’s reputation and honour, these neo-fascistoids start talking about George Soros,” Varoufakis said, noting that such attacks are anti-Semitic in nature. 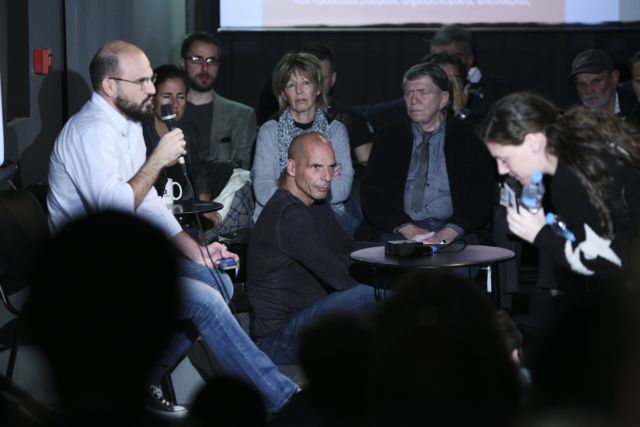 Former finance minister Yanis Varoufakis has announced that his MeRA 25 ‘front’ will run as a party in the next general election, and lambasted defence minister and junior coalition partner PanosKammenos, describing him as an extreme-right populist, comparing him to Hungarian Prime Minister Viktor Orban and Italian Deputy Prime Minister Matteo Salvini.

In an interview today with Greek Skai television, Varoufakis explained why he and his party will enter the fray in the next general election and expressed some bitterness over his former SYRIZA comrades’ attacks against him.

In connection with Kammenos’ reported allegation (which he later denied making) at a cabinet meeting, that the government had received a large amount of money to “buy off foreigners”, an apparent reference to the process of ratifying the Prespa Agreement in FYROM, Varoufakis said: “When they want to sully someone’s reputation and honour, these neo-fascistoids start talking about George Soros,” Varoufakis said, noting that such attacks are anti-Semitic in nature.

Varoufakis reiterated the claim in his book on his tenure as finance minister, Adults in the Room, that Soros in June, 2015, “picked up the phone to ask Tsipras to sack me”.

He did not clarify how he knew this, and why the business magnate would want him to be fired.

Asked about charges that he closed the banks in 2015 and cost the country tens of billions of billons of euros, and about New Democracy’s intention, if it comes to power, to create a parliamentary investigative committee that will probe his actions, Varoufakis declared, “Not only should they form an investigative committee, but let them court marshal me, if they dare.”

TANEA Team 29 Οκτωβρίου 2018 | 18:24
Share
Δείτε επίσης
Περισσότερα άρθρα για Αγγλική έκδοση
There is a danger of the war being viewed as something normal Editorial: Taking measures
Athens' objective was to avert concessions that might affect Greek interests Greece, Turkey declare their satisfaction with results of NATO summit
What is at stake is the strategic depth of the Alliance Editorial: A crucial NATO summit
European supervised drug consumption sites have been an inextricable part of drug treatment Editorial: The first step
The overturning of Roe v. Wade turns the clock back 50 years for American women. Editorial: Back and forth
Thymios' statement - “I no longer trust people.” – is a punch in the gut. Editorial: A punch in the gut
Editorial: Audits of politicians' wealth
Mario Draghi has a prominent position in the EU architecture Editorial: Alliance
After a certain point, the necessary caution is a matter of personal responsibility Editorial: COVID-19 and personal responsibility
Extremists still constitute a threat Editorial: Threat
A consciously responsible stance is needed Editorial: Maintaining COVID-19 alertness
The late PM Constantine Karamanlis famously said, 'We belong to the West' Editorial: Contradictions
The end of EU enhanced fiscal supervision signals the exit from the tunnel Editorial: Breakthroughs
Head of Greek Pomaks’ Association rips into Erdogan’s revisionist expansionism
All Greek governments since Andreas Papandreou's demanded the return of the Marbles Osborne: ‘Deal to be done’ on sharing Parthenon Marbles