The two parties combined have four parliamentary seats, which are necessary for Zaev to again garner the two-thirds majority required in the third stage of the constitutional revision. 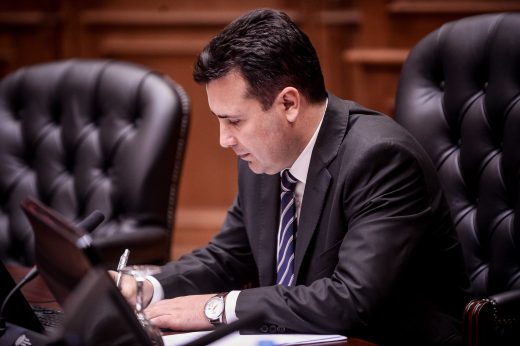 Two small Albanian parties in the Former Yugoslav Republic of Macedonia are threatening to block the constitutional amendments required by the Prespa Agreement with Greece.

The ethnic Albanian Besa Movement and the Alliance for Albanians, according to a report on the creditable Balkan Insight websight, have said that their support for the Prespa Agreement will be contingent upon whether the revised constitution will include a provision that Albanian will be the country’s second official language, and a provision in the preamble of the constitution recognising the Albanian population, which constitutes at least 25 percent of FYROM’s citizens, as one of the country’s two main ethnic groups.

In 2001, an armed insurgency by the Albanian National Liberation Army (NLA) led the country to the brink of civil war.

“We believe that the time has come for some of these political issues concerning the Albanians to be included in the discussion and to be adopted, so that we can finally resolve them,” said Besa MP Fadil Zendeli (photo).

In a law passed in January, 2018, by the government of Zoran Zaev, recognised Albanian as an official language throughout the country, whereas previously that applied only in regions in which there was a concentration of ethnic Albanians. Now the Albanian minority is seeking a constitutional guarantee.

Zendeli said that Besa has already reached agreement with the Alliance for Albanians on further constitutional changes that they intend to table in parliament this week.

The two parties combined have four parliamentary seats, which are necessary for Zaev to again garner the two-thirds majority required in the third stage of the constitutional revision.

FYROM’s largest ethnic Albanian party, the Democratic Union for Integration, has made clear that it has no intention of imperiling the constitutional revision process with further demands.

TANEA Team 25 Οκτωβρίου 2018 | 16:10
Share
Δείτε επίσης
Περισσότερα άρθρα για Αγγλική έκδοση
Editorial: Barbarity
In times of tensions military service is viewed as a national duty Editorial: Incentives for early military service
An emotional start in taking a position on developments in the region would be catastrophic Editorial: A measured response to Israeli-Palestinian conflict
The alternate interior minister said problems with COVID-19 self-tests will be resolved by the end of May Government poised to abolish mandatory SMD to leave home, working to solve self-test problems
If Syriza believes it can garner political gains with daily political transformations it is sorely mistaken Editorial: Political vertigo
Santander Consumer Finance begins activities in Greece
Evangelos Marinakis: Post-Covid Shipping and the Environment – Green Energy Investments
The US ambassador says Biden has “opened up a new vocabulary of cooperation” with Greece Pyatt see deeper US-Greece strategic ties under Biden administration
The case will be re-tried in the framework now set by the Council of State Bombshell Council of State ruling accepts state’s vaccine side-effect liability
May Day should be honoured with a single march each year Editorial: Unity
Transcending the collective crisis will require leadership and not troublemakers Editorial: Messages
After a six-month shutdown, workers in the restaurant business laid the tables Editorial: The first step
The government has repeatedly said that the existing framework is outdated Battle royal looms over government bill overhauling labour relations, limiting strike action
The labour trade union movement is an invaluable and irreplaceable weapon of workers An urgent need for the rebirth of the trade union movement
Editorial: The pendulum of American politics