The leader of Plefsi Eleftherias says that Kotzias’ resignation reveals a government that conducts foreign policy in a dangerous, incoherent manner that harms Greece 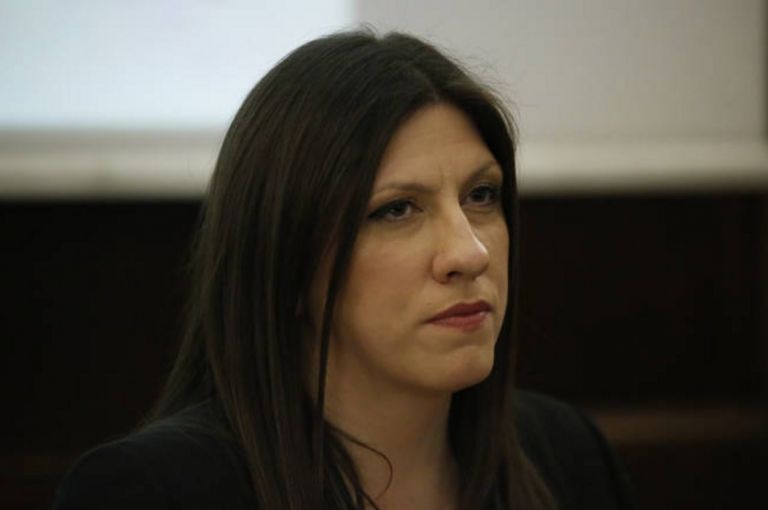 The government is dangerous for the country and for its people, Zoe Konstantopoulou, the leader of the Plefsi Eletherias (“Course to Freedom”) party and former parliament speaker, said in an interview with To Vima on Sunday.

Konstantopoulou says that PM Alexis Tsipras lacks the legitimisation to sign the Greece-FYROM Prespa Agreement, and that Alternate Health Minister Pavlos Polakis’ statements about the judiciary are hair-raising, as they are in line with the government’s raw meddling in the judiciary.

She says that she will not allow the Mati wildfire tragedy to swept under the rug, and that the clear criminal responsibilities of the government, local government and competent state services will be highlighted, as will cover-up efforts.

As regards the extra-judicial statement against the President of the Republic, regarding German war debts, the leader of Course for Freedom notes that, “the compensation for the crimes, for the atrocities of the Nazis against our people, is a national issue, and there is a national duty to honour our history and the victims.

“For the last two-and-a-half years, the President of the Republic and the government are fooling us,” she underlined.

Finally, she says that Plefsi Eleftherias is a force that aims to overturn the establishment, and that it appeals to democratically active citizens, without borders or old party-style divisions. It looks neither to the Left nor the Right, but to the future, she said.

We are in the midst of a government crisis. Do you believe the country’s geopolitical stance will change?

The resignation of Nikos Kotzias and the assumption of his portfolio by Alexis Tsipras reveal how dangerous the Tsipras government is overall for Greece and the Greeks. Tsipras is executing a death contract against Greece and the Greeks. He will do whatever is necessary to carry out the orders that have been given to him, and to stay in power. Kotzias was ousted with summary procedures, after the secret Tsipras-Defence Minister Panos Kammenos meeting, which was followed by heavy allegations at the cabinet meeting.

The once chosen one, who shares the guilt of the treasonous Prespa Agreement, was expelled like a pariah, under the weight of charges regarding the management of his ministry’s secret funds. The ministry and the secret funds were taken over by the prime minister, who said that he is “sending a message abroad and domestically” that he will implement the void Prespa Agreement. He is saying that he will execute the contract. Days before all this happened, Alternate Foreign Minister Yorgos Katrougalos had already begun preparing Tsipras’ visit to Mocow, so the replacement of Kotzias was already in the works.

All the events reveal uncontrolled, behind-the scenes actions of a government-Mafia, which moves forward with sackings and annihilation. It exercises foreign policy in a manner that is dangerous, incoherent, hot-headed, and exceptionally harmful for the country and our people. There is no national strategy, and no evaluation of the geopolitical issues. Their only concern is pleasing and serving foreign overlords, the execution of the contract.

You have opposed the Prespa Agreement. Why?

The ‘agreement’ is void under international law. Mr. Tsipras has no elegitimized to sign it. He had no mandate  from the Greek people, nor could he have, as the overwhelming majority of Greeks are opposed to its content. That is why the negotiations were kept secret until it was signed, which is against what a national strategy mandates. The agreement does not serve Greek interests, but rather the orders of the US, Nato, Germany, and the EU. It involves the ceding of our historical and national identity (by elegitimiz a Macedonian nationality and language in a population that does not possess these characteristics) and a dangerous acknowledgement of mutual irredentism. It promotes the expansion of Nato in our region and further elegitimized, and it brings US-Russian tensions to our borders. Finally, the agreement involves the cession of rights in crucial areas – such as energy, the use of Greek ports and the Greek railway system, and the international commercial guarantee of Macedonian products.

Do you believe the agreement will pass in both Skopje and Athens?

Already, in our neighbouring country the ‘agreement’ was completely elegitimized, after the crushing abstention of 65 percent of the electorate. Clearly, the constitutional amendment process there cannot be viewed as valid. Even attempting it is an aberration, which simply confirms that Mr. Zaev, like Mr. Tsipras, is not acting with a popular mandate. The statements of both that they will go forward aim to satisfy foreign players. It is our duty not to allow this agreement to pass, and we shall do whatever we are entitled and obliged to do in order to annul it.

Some believe that the government’s time is running out. Do you agree?

The Tsipras  government was overthrown from the start, as it came to power by unconstitutionally dissolving the previous parliament and exploiting the disappointment of a majority of Greeks, who did not come out to vote because their previous (No) vote in the referendum (on the bailout memorandum) was violated and the memorandum was passed. The government is so enamoured with power that it will do anything to keep it. We, along with the citizens, will do everything to topple it, and to restore democracy in our country.

Recently, the statements of Alternate Health Minister Pavlos Polakis,  at a SYRIZA Central Committee meeting, came to light. He said, ‘If we put them in jail, we shall win the elections.’ That caused a backlash. How do you view that?

The hair-raising statements of Mr. Polakis, who went as far as to say that the government should “push the judiciary more”, constitute an admission of the government’s raw meddling in the judiciary, in order to influence judges and ensure the desired result in court cases. The references to “high culture” clearly refer to bribing judges, and that “it is dangerous but must be done”. This an admission of committing felonies and misdemeanours (abuse of power, bribing a judge, and dereliction of duty), and of an incitement of their organised commission, by members of the government and judges. In a statement that we issued with Plefsi Eleftheria’s strategy and communications director, Diamantis Karanastasis, we call upon the Union of Judges and Prosecutors and Bar Associations throughout the country to intervene, and to demand the full investigation of these crimes, which destroy the independence of the judiciary and are an aberration.

You have filed a lawsuit concerning the Mati wildfire tragedy. Who is responsible?  Overall, do you see governmental meddling in the judiciary?

We filed a lawsuit a few days ago regarding the August crime in Mati, along with shocking data and documents. We will not let this case and the clear criminal responsibilities of the government, local government and the competent services, as well as the cover-up effort, to be swept under the rug. In this case, we have seen the intervention of the government and of the government-appointed Supreme Court Prosecutor, Xeni Dimitriou, who during the investigation held a forbidden secret meeting with the justice minister. I revealed this on 7 August, 2018, and she attempted to delay the case ad infinitum, with an unprecedented order to place the criminal case under the purview of the government-appointed General Inspector of Public Administration, Maria Papaspyrou, in order to await her future report. I have publicly denounced these interventions. We cannot and should not be complacent when a case involves the horrible death of 99 of our fellow human beings, and such intertwined vested interests. We are not complacent.

One of your initiatives that caused a sensation was your recent, out-of-court statement against the President of the Republic, regarding Germany’s debts to Greece. Why did you do this, and why is the demand that Germany pay its debt just?

The payment of Germany’s debt, which has been calculated to be at least between 278 and 341bn euros, is a top national demand. Reparations for the crimes and atrocities at the expense of our people are a national affair, and there is a duty to honor our history and our victims. For the last two-and-a-half years, the President of the Republic and the government have been fooling us. They hypocritically go around visiting places of martyrdom, placing wreaths and making pompous statements, but they do not do what is legally required to pursue payment. On the contrary, with specific acts, statements and omissions, they undermine this national issue, and serve the interests of Germany. In the extra-judicial statement that we delivered to the President of the Republic and to the Prime Minister, we call upon them to proceed with an official act that puts forward the claim, and we hold them to their criminal responsibility. We shall undertake more actions.

Precisely how would Plefsi Eleftherias describe its political identity? Some critics say that you do not belong to the Left.

Certainly, we do not belong to the “Left” of Tsipras and of those who betrayed the people and our country, nor do we belong to the “Left” of those who are interested in a partisan force and in being appointed to an office. We are a force that aims to overturn the establishment, and we are appealing to all democratically active citizens, without the walls of old-party divisions. We look neither to the Left nor the Right, but rather forward.

How can the rise of the extreme-right in Europe be confronted politically? You are in touch with foreign leaders, such as Jean-Luc Melenchon. Would you be interested in fashioning a broad, progressive front?

Traditional totalitarianism and fascistic neo-liberalism are extreme-right and fascist. So, too, is the fascistic neo-liberalism that we experience in our country. Yes, we are in touch with leaders, movements, and other figures from all over the world. We have already undertaken initiatives for joint actions which transcend the borders of our countries. Our focus is the common interests of our peoples and citizens, and the values of democracy, justice, social prosperity, and the social state under the rule of law. We shall continue.

What is at stake in the forthcoming national elections? Left-Right?

What is at stake is the liberation of our people and our country. We are appealing to the citizens. We look neither Left nor Right. We look forward.

TANEA Team 21 Οκτωβρίου 2018 | 23:09
Share
Δείτε επίσης
Περισσότερα άρθρα για Αγγλική έκδοση
European supervised drug consumption sites have been an inextricable part of drug treatment Editorial: The first step
The overturning of Roe v. Wade turns the clock back 50 years for American women. Editorial: Back and forth
Thymios' statement - “I no longer trust people.” – is a punch in the gut. Editorial: A punch in the gut
Editorial: Audits of politicians' wealth
Mario Draghi has a prominent position in the EU architecture Editorial: Alliance
After a certain point, the necessary caution is a matter of personal responsibility Editorial: COVID-19 and personal responsibility
Extremists still constitute a threat Editorial: Threat
A consciously responsible stance is needed Editorial: Maintaining COVID-19 alertness
The late PM Constantine Karamanlis famously said, 'We belong to the West' Editorial: Contradictions
The end of EU enhanced fiscal supervision signals the exit from the tunnel Editorial: Breakthroughs
Head of Greek Pomaks’ Association rips into Erdogan’s revisionist expansionism
All Greek governments since Andreas Papandreou's demanded the return of the Marbles Osborne: ‘Deal to be done’ on sharing Parthenon Marbles
All efforts toward a radical resolution of the refugee problem have failed Editorial: The end does not justify the means
France's centrist forces are rallying behind President Emmanuel Macron Editorial: The political centre
The Germans are returning, this time not to impose their will but to cooperate Editorial: Greece as a bridge between Western Balkans, EU