The two party leaders reiterated their intention to continue their political collaboration in the coalition government at least until March, when the Prespa Agreement is expected to be tabled in the Greek Parliament 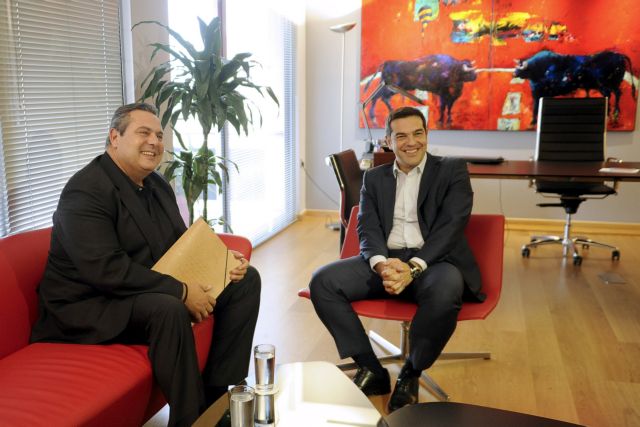 Defence Minister Panos Kammenos’ statements during his recent trip to Washington, in which he proposed a “Plan B” to replace the Greece-FYROM Prespa Agreement with a nexus of Balkan alliances, and invited Washington to establish a permanent military presence in a number of military bases in Greece, triggered a maelstrom of criticism and friction between the two partners in the coalition government, SYRIZA and the Independent Greeks.

Kammenos yesterday said in an interview that Prime Minister Alexis Tsipras was aware of his views on these two issues, but disagreed. Still, he expressed them in a formal meeting with US Defense Secretary Jim Mattis, leaving the impression that he is carving out his own foreign policy, and triggering intense reactions in SYRIZA, from Parliament Speaker Nikos Voutsis on down.

In order to paper over the differences at least until the May European Parliament and local elections (some say even a general election), Tsipras and Kammenos held an unannounced meeting yesterday at the Greek Military’s Officers Club, a stone’s throw away from the PM’s office, where they sought to iron out how they will manage their public differences and keep them under wraps until the general election, and at the same time rein in the mutual recriminations between MPs and members of the two parties.

The two party leaders reiterated their intention to continue their political collaboration in the coalition government at least until March, when the Prespa Agreement is expected to be tabled in the Greek Parliament, if and only if FYROM has amended its constitution, as the Prespa Agreement mandates.

Kammenos has repeatedly stressed that his party will pull out of the government when the agreement is tabled.

That does not mean, however, that his party will not support the government on all other types of legislation in parliament.

For their part, SYRIZA ministers have said that, even without Kammenos, the government can muster an absolute majority both for ratification of the Prespa Agreement, and for a possible no-confidence motion by main opposition New Democracy.

TANEA Team 16 Οκτωβρίου 2018 | 16:20
Share
Δείτε επίσης
Περισσότερα άρθρα για Αγγλική έκδοση
Mario Draghi has a prominent position in the EU architecture Editorial: Alliance
After a certain point, the necessary caution is a matter of personal responsibility Editorial: COVID-19 and personal responsibility
Extremists still constitute a threat Editorial: Threat
A consciously responsible stance is needed Editorial: Maintaining COVID-19 alertness
The late PM Constantine Karamanlis famously said, 'We belong to the West' Editorial: Contradictions
The end of EU enhanced fiscal supervision signals the exit from the tunnel Editorial: Breakthroughs
Head of Greek Pomaks’ Association rips into Erdogan’s revisionist expansionism
All Greek governments since Andreas Papandreou's demanded the return of the Marbles Osborne: ‘Deal to be done’ on sharing Parthenon Marbles
All efforts toward a radical resolution of the refugee problem have failed Editorial: The end does not justify the means
France's centrist forces are rallying behind President Emmanuel Macron Editorial: The political centre
The Germans are returning, this time not to impose their will but to cooperate Editorial: Greece as a bridge between Western Balkans, EU
The demographic crisis must be managed swiftly Editorial: Demographic crisis
There was a Jewish presence in Thessaloniki even in antiquity, and the Apostle Paul preached in its synagogue Leon Saltiel: Glimmers of hope in battling Greek antisemitism
Investment will also play a pivotal role Editorial: The dynamic of the Greek economy
Universities will be given more control over their affairs Editorial: Reforms must be implemented swiftly