This was the first meeting between the two leaders since Ankara on 15 August released two Greek army officers that had been incarcerated in a Turkish prison for over five months, 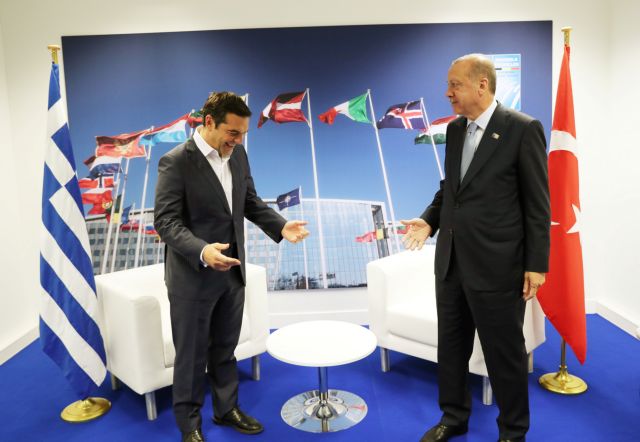 Amidst international expectations of a renewed push to jump-start Cyprus settlement talks, PM Alexis Tsipras and Turkish President Recep Tayyip Erdogan discussed the full range of bilateral relations during a one-hour meeting today on the sidelines of the 73rd UN General Assembly in New York.

The two countries’ foreign ministers, Nikos Kotzias and Mevlut Cavuoglu were present at the meeting, as was Turkish Defence Minister Hulusi Akar, who was serving as chairman of Turkey’s Joint Chiefs of Staff when he was tapped for the cabinet post.

This was the first meeting between the two leaders since Ankara on 15 August released two Greek army officers that had been incarcerated in a Turkish prison for over five months, after being arrested in the Evros border region. The incident had heightened tensions between the two countries.

However, beyond the niceties and broad smiles, there were indications of a gradual normalisation of the two countries’ relations, as Erdogan invited Tsipras to Istanbul for talks.

Greek analysts and pundits have expressed the view that the crisis in US-Turkey reations has pushed Erdogan to seek to draw closer the EU, and that Greece can play a key role in promoting that objective.

Aside from the prospect of renewed Cyprus talks, energy issues and Turkey’s hostile activity in Cyprus EEZ Aegean, Greek government sources said that Aegean tensions and implementation of the EU-Turkey refugee agreement were high on the agenda.

The Greek PM’s office publicised the meeting with a tweet: “Μeeting with the President of Turkey, Mr. Recep Tayyip Erdogan, on the sidelines of the 73rd UN General Assembly # UNGA”.

Aegean Tensions Alexis Tsipras Bilateral Talks Cyprus Settlement Talks Cyprus' EEZ Energy Issues EU-Turkey Refugee Agreement Recep Tayyip Erdogan UN General Assembly 25 Σεπτεμβρίου 2018 | 23:32
Share
Περισσότερα άρθρα για Αγγλική έκδοση
Venezuela’s Maduro, citing Pope, asks congress to consider same-sex marriage
Wall St Week Ahead-More U.S. companies offer earnings guidance despite pandemic
Editorial: The only course
The European Commission yesterday called upon Tatar to begin a dialogue Editorial: New realities in Cyprus
French teachers are declaring that they will continue to “instruct students in difficult subjects”. Editorial: “Je Suis Prof”
Editorial: Endurance test
The government had an extremely broad social consensus in support of its policies Editorial: Reforms
Turkey’s activity in the area of Kastelorizo constitutes a great opportunity for Greece Editorial: Opportunity
It is no coincidence that these elections are described as the most important ever in the occupied territories Editorial: A crucial contest
This is not merely and internal party affair as it raises serious issues about how institutions function Editorial: Grey zones
in a democracy all views can be expressed but they cannot be imposed on others through violence Editorial: The lesson
Appellate Court conviction of Golden Dawn a 'victory for democracy' says Mitsotakis
Editorial: A historic day
Golden Dawn was a criminal organisation says court ruling that convicts leader, six more ex-MPs
The PM said yesterday that, 'Technology is the catalyst for economic growth.' Editorial: Investments