US Secretary of Defense in Skopje ahead of referendum, sees Russian intervention

According to Laura Cooper, the Acting Deputy Assistant Secretary of Defense for Russia, Ukraine, and Eurasia, Moscow is paying voters to abstain from the referendum 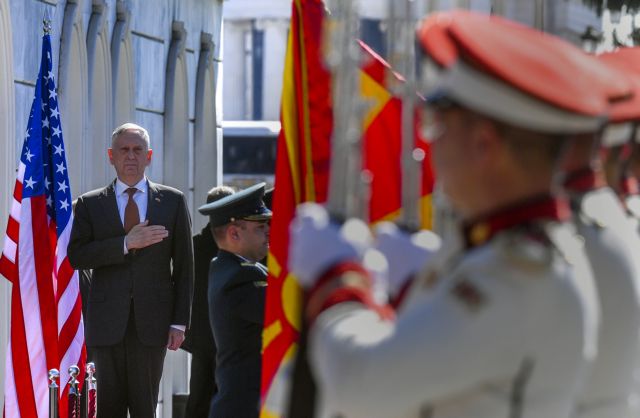 US Secretary of Defense Jim Mattis arrived in Skopje today to express support for a ‘Yes’ vote in the 30 September referendum on the Greece-FYROM naming agreement.

Mattis is the latest of a series of top-level Western officials who have traveled to Skopje to call on citizens to support the deal in the referendum.

If approved, then the government of FYROM must revise the constitution so as to incorporate the country’s new name, Republic of North Macedonia, and to remove irredentist references.

Mattis told reporters en route to Skopje that the referendum is key for those whose lives can change due to the economic opportunities that will flow from the agreement and the security the country will find by joining the ranks of Nato.

Mattis said that the US is keen on the citizens of FYROM shaping their own future, and not having others do so for them.

He said that Washington does not want Moscow to do what it has done in other countries (interfering in elections), and that there is “no doubt” that Russia has funded groups which oppose the agreement and is trying to deceive voters.

According to Laura Cooper, the Acting Deputy Assistant Secretary of Defense for Russia, Ukraine, and Eurasia, Moscow is paying voters to abstain from the referendum and is supporting pro-Russian organisations.