How Tsipras, SYRIZA became best friends with the Americans

The strategic cooperation of the two sides is now very deep. Athens has entirely embraced the “US energy doctrine”, which seeks to isolate Russia. 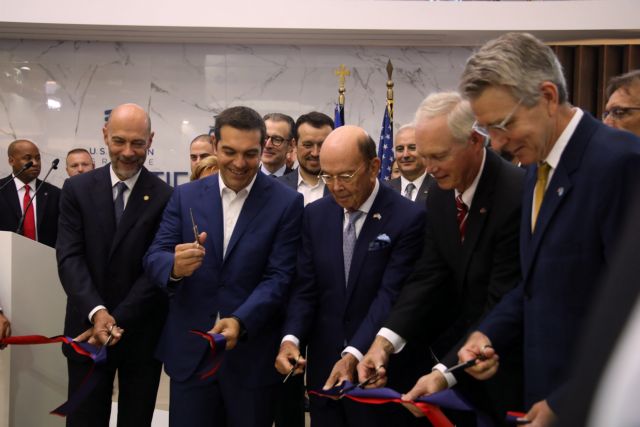 The historian of the future will pass judgment on all that happened in the nearly fateful summer of 2015. Much has been said, but much less has been written about behind-the-scenes events in the two weeks between the referendum on the bailout package and the capitulation of the first government of Alexis Tsipras at the 12 July, 2015, summit.

Those who are aware of a large part of the background of that tumultuous period find that it marks the beginning of the shift of the young prime minister from seeking other safe harbours, possibly Russian, to the familiar warm embrace of Greece’s traditional and historical ally on the other side of the Atlantic.

The US used its great geopolitical weight to ensure that Greece remains in the Eurozone. That included phone calls of President Obama to Chancellor Angela Merkel and US Treasury Secretary Jack Lew’s contacts with Tsipras, and other channels that we shall never learn about.

The Americans discerned, thanks to their strategic prowess, that Greece, despite its sins, could not be left alone in a region rife with loci of instability. The geopolitical argument prevailed.

Nearly three years later, in 2018, the seasoned observer cannot but admit the obvious. Greece, ruled by the Left and a junior partner from the populist Right, may be the most pro-American government in contemporary history. Whoever expected that left-wing SYRIZA would spar with the US, in the manner of Pasok in the early 1980’s, were completely belied.

The clashes that transformed central Athens into a war zone and the anti-American anger of the young Alexis Tsipras and other “revolutionaries” against US President Bill Clinton’s visit to Greece in 1999 have obviously been erased from the “radical subconscious” of those now in power.

Tsipras’ meeting with US President Donald Trump last October in Washington was the icing on the cake, accompanied by a warm news conference in the Rose Garden. This is a development that both the PM and Foreign Minister Nikos Kotzias share with their foreign interlocutors.

The strategic cooperation of the two sides is now very deep. Athens has entirely embraced the “US energy doctrine”, which seeks to isolate Russia. There are frequent exchanges of visits, and the coincidence of interests in regions such as the Balkans is complete. That was demonstrated by the Greece-FYROM naming accord.

According to one theory, American circles have discussed the prospect of turning Greece into another Israel, a “frontier state” as Wells Mitchell, the Assistant Secretary of State for European and Eurasian Affairs called it, near an unstable region that now includes Turkey.

However, deep down the Americans do not want to “lose Turkey”, and it appears that Athens and Washington agree on that. Very few serious decision makers in Athens want an economic collapse of Turkey or its accession to the Russian sphere of influence, which would automatically transform Greece into the border between the West and the Middle East.

US honoured country at the Thessaloniki International Fair

The most incontrovertible witness to the fact that relations have passed to another level is this year’s Thessaloniki International Fair, at which Donald Trump’s US is the honoured country. Who would have thought that the flagship of the US Sixth Fleet, the “USS Mount Whitney”, would anchor in Thessaloniki and that it would be the place where the Americans would hold their major reception?

An experienced diplomat recently said in a private conversation regarding that development, “Can you imagine how our Turkish neighbours will feel when they see this picture?”

The truth is that the Americans viewed SYRIZA’s path to power quite favourably. In the early stages of relations,SYRIZA and Greece were for American economists and academics a “guinea pig”, through which they believed they would highlight the inadequacies of the eurozone.

If the same people had approached the government of George Papandreou between 2009-2011, they could never have imagined that SYRIZA and Tsipras’ horrible appointment of Yanis Varoufakis as finance minister would almost bring their plans to fruition. Former President Obama and Treasury Secretaries Timothy Geitner and Jack Lew fortunately viewed things differently.

The role of the US Ambassador
US Ambassador Geoffrey Pyatt plays a central role in the ties between the SYRIZA-Independent Greeks government and Washington. He is a dynamic and at times excessively interventionist diplomat who does not mince his words - and thus irks many – and who put US-Greece relations on a different footing.
That is something that is acknowledged even by his enemies – who are not few and can be found on various sides - even in the main opposition party, as some say.
Those who have met him recall the theory of the “three geopolitical circles”, with Greece in the centre, which he loves to expound on, and the maps of energy pipelines that lie on his desk.
Pyatt is a classic example of a diplomat of the “deep establishment” of the State Department. Judging by events, Foggy Bottom must be satisfied by the level of US-Greece relations.
The American presence at the Thessaloniki International Fair, and the large delegation headed by Secretary of Commerce Wilbur Ross and including other US government officials – Deputy Energy Secretary Mark Menendez, Assistant Secretary of State for Educational and Cultural Affairs Marie Royce, and U.S. State Department Director for South Central European Affairs Matthew Palmer – combined with the presence of top American companies such as Google, Facebook, CISCO, Hewlett-Packard, Microsoft, and Lockheed Martin, demonstrate that the interest of the United States is not ephemeral.

TANEA Team 9 Σεπτεμβρίου 2018 | 23:08
Share
Δείτε επίσης
Περισσότερα άρθρα για Αγγλική έκδοση
There is a danger of the war being viewed as something normal Editorial: Taking measures
Athens' objective was to avert concessions that might affect Greek interests Greece, Turkey declare their satisfaction with results of NATO summit
What is at stake is the strategic depth of the Alliance Editorial: A crucial NATO summit
European supervised drug consumption sites have been an inextricable part of drug treatment Editorial: The first step
The overturning of Roe v. Wade turns the clock back 50 years for American women. Editorial: Back and forth
Thymios' statement - “I no longer trust people.” – is a punch in the gut. Editorial: A punch in the gut
Editorial: Audits of politicians' wealth
Mario Draghi has a prominent position in the EU architecture Editorial: Alliance
After a certain point, the necessary caution is a matter of personal responsibility Editorial: COVID-19 and personal responsibility
Extremists still constitute a threat Editorial: Threat
A consciously responsible stance is needed Editorial: Maintaining COVID-19 alertness
The late PM Constantine Karamanlis famously said, 'We belong to the West' Editorial: Contradictions
The end of EU enhanced fiscal supervision signals the exit from the tunnel Editorial: Breakthroughs
Head of Greek Pomaks’ Association rips into Erdogan’s revisionist expansionism
All Greek governments since Andreas Papandreou's demanded the return of the Marbles Osborne: ‘Deal to be done’ on sharing Parthenon Marbles