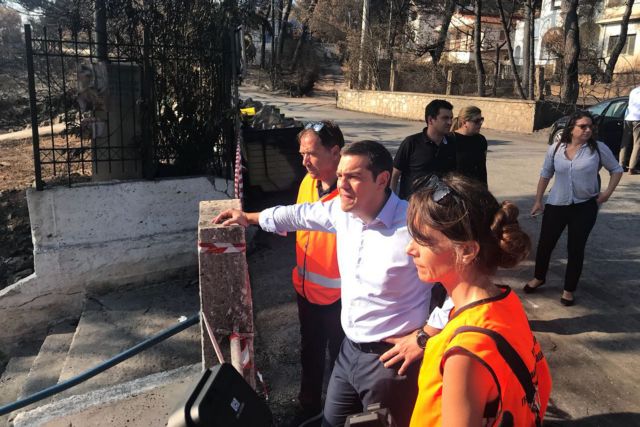 Τhe prime minister’s visit to flood-stricken Mandra, Attica last November, and to Mati on 30 July, had two things in common. One was that they were linked to a total disaster, and the other that there was an absence of citizens.

Not having much else to show, Alexis Tsipras looks after his image, and he takes care not to let anything unexpected blemish it. That is why he organised a “war room” broadcast live on that fateful Monday, where he forgot to mention that people had died.

That is why he visited the fire-ravaged area early in the morning, accompanied only by government officials and his own camera. That is why he announced his measures on Lavrio, dozens of kilometers away from the site of the fire. To show that he stands by the victims, he received a group of them in his office.

If the PM was organising yet another escape from reality, the volunteers were from the very start in place. Hundreds of people hastened to contribute, to stand by people, to cover the void left by the incompetence of the state. Some were looking for survivors, and others were trying to persuade those who had lost everything that they should struggle. “They were simply waiting for us to hold their hand, so as not to feel alone,” as one volunteer told Ta Nea.

These are two worlds. On the one hand you have the finger-pointing at victims of Defence Minister Panos Kammenos, the smiles of Attica Prefect Rena Dourou, and the reference to bollocks by SYRIZA MP Eleni Avlonitou.

On the other hand you have the self-denial of volunteers, the contributions of well known and anonymous people, tennis player Stefanos Tsitsipas’ “Pray for Greece”, and the moving statements of medal-winning pole vaulters Katerina Stefanidi and Nikol Kyriakopoulou about the fire-stricken.

In fact it is the same world. The question is whether distance or proximity will prevail. It will be either callousness or solidarity. In a democracy, the citizens decide.

TANEA Team 11 Ιουλίου 2018 | 09:30
Share
Περισσότερα άρθρα για Αγγλική έκδοση
The further deepening of Greece-France relations is exceptionally positive Editorial: Mutual assistance, European defence
Mitsotakis, Macron announce mutual defence pact, Greece's procurement of French frigates
Greece-France sign mutual defence pact, major arms procurement deal
The pain and agony of the families cannot be softened, but the state can make amends Editorial: Everything must come to light
Earthquake in Crete – Tents are set up for 2,500 people who were left homeless – The area is in a state of emergency
Editorial: Turning a page
'This is no longer about climate change. This is about addressing a climate crisis.' Mitsotakis focuses on pandemic, climate crisis, and Greek-Turkish relations in UN speech
The head of SYRIZA’s Citizen’s Protection policy section simply followed his party’s mannerism Editorial: Mannerism
The cottage industry of lawsuits against educators constitutes a disruption of social peace Editorial: Decisiveness
For the Ecumenical Patriarchate, which has spiritual authority over the Church in America, Elpidophoros, 54, is the best and the brightest that it has to offer. Tempest in a teapot: The attacks on Archbishop Elpidophoros and foreign policy stunts
US President Joe Biden has chosen a particular mixture of policies Editorial: Doctrines
Approximately 160,000 people in Greece today are afflicted with Alzheimer’s disease Editorial: Reminder
Unrepentant, Tsipras unleashed charges against the government and announced handouts Editorial: A return to the past
The country is in great need of stability., not electoral surprises Editorial: Normalcy
The EU’s adjustment of financial rules has facilitated the situation Editorial: Lessons