Editorial: The death of a journalist

Stavros Psycharis was a man who had been around the block, and did not hesitate, when necessary, to soil his hands. 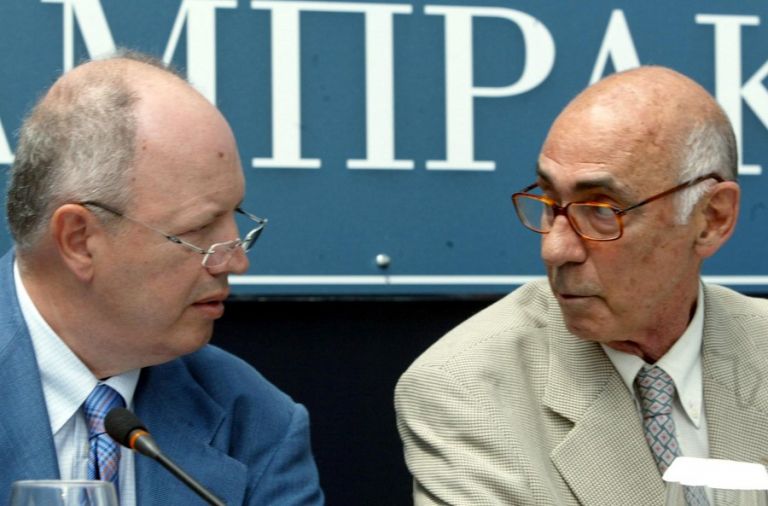 The death of renowned journalist and publisher Stavros Psycharis formally signals the end of an era, or at least of a circle, a circle of “press people” who changed Greek journalism and wielded political influence, leaving their mark on the post-regime change era (following the fall of the 1967-1974 military junta).

There were great differences between the members of this circle.

In the history of the Lambrakis Press (DOL), one had on the one hand publisher and owner Christos Lambrakis (photo, with Psycharis) and the legendary editor Leon Karapanagiotis, who were both intellectuals (and friends) who directed “from above”.

On the other hand, Stavros Psycharis was a man who had been around the block, and did not hesitate, when necessary, to soil his hands.

What they had in common was that they were all true journalists.

They served their profession with complete cognisance of their role, and the readership rewarded them.

As national politics reporter for Ta Nea, and then as Editor-in-Chief and publisher of To Vima for decades, and as the head of DOL, Psycharis experienced first-hand the effort of a government at first to control and then to muzzle voices that criticised and disputed it.

Although he may have often been contradictory or excessive, he never allowed himself to become subjugated. He never censored.

“In real life, there are successes and failures. This personal battle (of mine) may have been lost under unfavourable circumstances, but nothing happens for naught,” Psycharis wrote in his farewell press note.

This newspaper, which steadfastly remains on the ramparts, is well aware of that, just as it is aware of its duty to offer recognition and to remember.

TANEA Team 3 Αυγούστου 2022 | 19:01
Share
Δείτε επίσης
Περισσότερα άρθρα για Αγγλική έκδοση
Foreign media have even compared the government with Greece’s seven-year military junta Editorial: A necessary cleanup
Citizens have demonstrated they need of state support Editorial: The need for a steady social benefits policy
In the first phase of the pandemic the correct decisions were taken Editorial: Vigilance needed in dealing with Covid-19
Greek side is obliged to be, as it is, in a constant state of readiness Editorial: Composure
In the long term, liberal democracy is “condemned” to win Editorial: A serious mistake
The PM stressed that the tapping was legal Mitsotakis denies prior knowledge of phone tapping of Androulakis, pledges reform, tight oversight of EYP
Resignations are not enough, nor would a cabinet reshuffle or snap election suffice Editorial: Transparency now!
Citizens seek persuasive solutions to the problems of daily life Editorial: Restoring trust in political parties
Last year in Greece there were 17 femicides Editorial: An urgent wake-up call
Psycharis He began his long career at the Lambrakis Press in 1972 Renowned journalist, publisher, entrepreneur Stavros Psycharis has died age 77
It is inconceivable for the average citizen to be defenceless amidst major economic trials Editorial: A model programme
Greece now has experience and an enhanced plan of deterrence Editorial Ta Nea: Maintaining composure
'I truly feel that the future of humanity is dark' God at Ground Zero: How a Mount Athos monk fit 9/11 into Byzantine iconography
Hatzidimitriou shattered the stereotype that women are not good at maths Editorial: Worthy role Models
A great reform was necessary but seemed unfeasible0 Editorial: Modernisation of the state