when many seek out role models by scrolling down in the accounts of influencers, there are still people, especially young people, whose example it is worthwhile to follow. 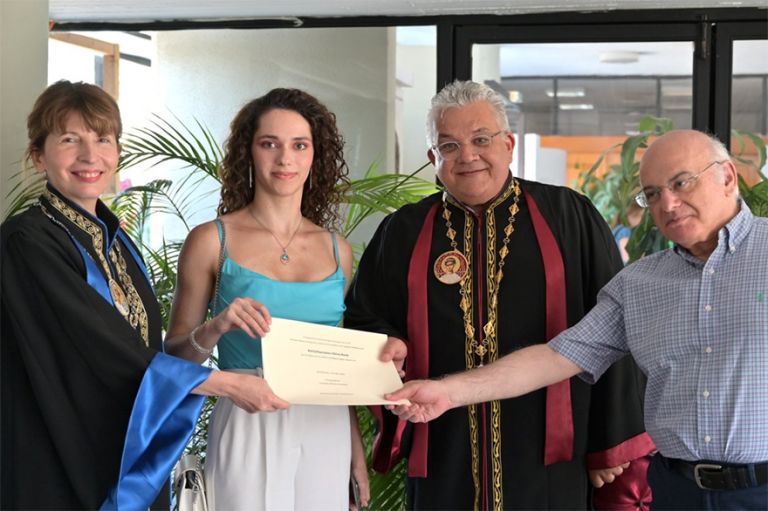 The Faculty of Applied Sciences of the Aristotle University of Thessaloniki was established in 1925.

The mathematics department was established in 1928.

It took nearly a century before a female university student, Eleni Hatzidimitriou, would graduate with an overall GPA of a perfect 10.

An important taboo was broken.

Firstly, she shattered the stereotype that women are not good at maths.

Secondly, she proved, at a time when many seek out role models by scrolling down in the accounts of influencers who present their daily lives as a product, there are still people, especially young people, whose example it is worthwhile to follow.

It is worthwhile because it demonstrates that the easy path is not necessarily the best one.

As Ms. Hatzidimitriou herself said, what intrigued her about mathematics is its difficulty, the fact that there is always something more to chase.

In an era inundated by superficial approaches to careers and character, a young woman who makes a great effort and is rewarded for it can inspire everyone, regardless of age.

She can mobilise everyone to seek and express their best selves.

She reminds us that the number of “likes” one receives is not the measure of social, professional, or personal recognition.

Her example demonstrates that we need other role models, and we have a duty to make them known when they appear.

TANEA Team 31 Ιουλίου 2022 | 18:43
Share
Δείτε επίσης
Περισσότερα άρθρα για Αγγλική έκδοση
Resignations are not enough, nor would a cabinet reshuffle or snap election suffice Editorial: Transparency now!
Citizens seek persuasive solutions to the problems of daily life Editorial: Restoring trust in political parties
Last year in Greece there were 17 femicides Editorial: An urgent wake-up call
Stavros Psycharis never allowed himself to become subjugated. He never censored. Editorial: The death of a journalist
Psycharis He began his long career at the Lambrakis Press in 1972 Renowned journalist, publisher, entrepreneur Stavros Psycharis has died age 77
It is inconceivable for the average citizen to be defenceless amidst major economic trials Editorial: A model programme
Greece now has experience and an enhanced plan of deterrence Editorial Ta Nea: Maintaining composure
'I truly feel that the future of humanity is dark' God at Ground Zero: How a Mount Athos monk fit 9/11 into Byzantine iconography
A great reform was necessary but seemed unfeasible0 Editorial: Modernisation of the state
Editorial: The need for an in-depth investigation
Justice delayed is justice denied Editorial: Swift justice
A revival of populism is exploiting the natural anxieties of citizens Editorial: President Katerina Sakellaropoulou's message
Editorial: Mandatory reforestation after the wildfires
The EU is already facing adverse conditions due to the war in Ukraine Editorial: The major crisis the EU faces and the great leap forward
Europeanists are even concerned about the EU’s Recovery Fund Editorial: With mind and heart