The geopolitical and economic upgrading of Athens as a partner of the US should be highlighted, and all issues pertaining to Turkish provocations should be put on the table. 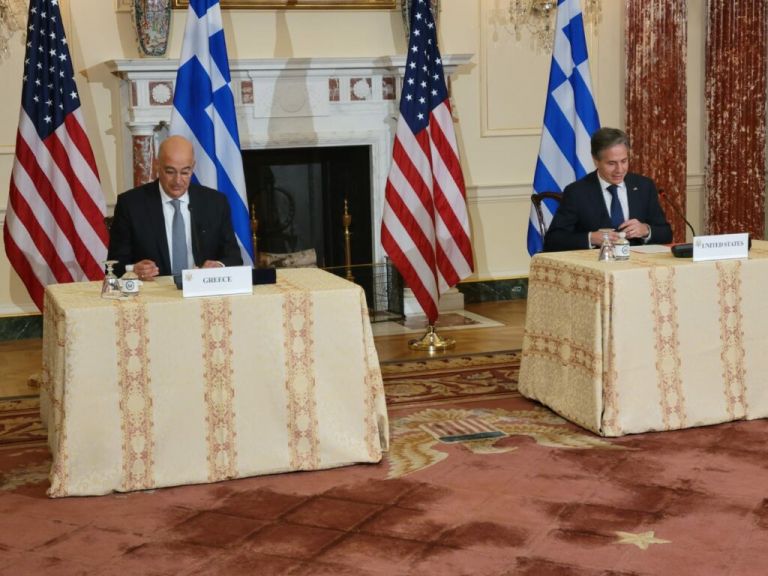 All Greek Prime Ministers since the post-junta regime change in 1974 have paid an official visit to the White House.

Each time, an invitation from the US president offers different opportunities for Greece, and Prime Minister Kyriakos Mitsotakis’ second visit to the White House (the first was when Donald Trump was in office) is no exception to the rule.

Particularly given the current confluence of events, with an ongoing, full-blown war on the European continent and with all the post-WWII certainties being challenged, the presence of the Greek delegation in Washington demonstrates Greece’s importance as a core Western country.

The government maintains that the amended US-Greece Mutual Defence Cooperation Agreement (MDCA, photo, signing) that was ratified by Parliament last week is proof of the commitment of the US to make a long-term geopolitical investment in Greece.

That commitment should be made clear during the PM’s visit to Washington, as the symbolism of meetings is as powerful as the substance of relations.

During the two-day visit, Greece’s role as an energy hub must be emphasised.

Moreover, the geopolitical and economic upgrading of Athens as a partner of the US should be highlighted, and all issues pertaining to Turkish provocations should be put on the table.

TANEA Team 16 Μαΐου 2022 | 22:31
Share
Δείτε επίσης
Περισσότερα άρθρα για Αγγλική έκδοση
Thymios' statement - “I no longer trust people.” – is a punch in the gut. Editorial: A punch in the gut
Editorial: Audits of politicians' wealth
Mario Draghi has a prominent position in the EU architecture Editorial: Alliance
After a certain point, the necessary caution is a matter of personal responsibility Editorial: COVID-19 and personal responsibility
Extremists still constitute a threat Editorial: Threat
A consciously responsible stance is needed Editorial: Maintaining COVID-19 alertness
The late PM Constantine Karamanlis famously said, 'We belong to the West' Editorial: Contradictions
The end of EU enhanced fiscal supervision signals the exit from the tunnel Editorial: Breakthroughs
Head of Greek Pomaks’ Association rips into Erdogan’s revisionist expansionism
All Greek governments since Andreas Papandreou's demanded the return of the Marbles Osborne: ‘Deal to be done’ on sharing Parthenon Marbles
All efforts toward a radical resolution of the refugee problem have failed Editorial: The end does not justify the means
France's centrist forces are rallying behind President Emmanuel Macron Editorial: The political centre
The Germans are returning, this time not to impose their will but to cooperate Editorial: Greece as a bridge between Western Balkans, EU
The demographic crisis must be managed swiftly Editorial: Demographic crisis
There was a Jewish presence in Thessaloniki even in antiquity, and the Apostle Paul preached in its synagogue Leon Saltiel: Glimmers of hope in battling Greek antisemitism