Erdogan says Greece is 'ungrateful' to Turkey on refugee issue, says 'all of Greece a US base'

'Unfortunately, Alexandroupolis is not just one base – all of Greece has been transformed into a US base. I did not manage to count how many American bases there are in Greece,' Erdogan said. 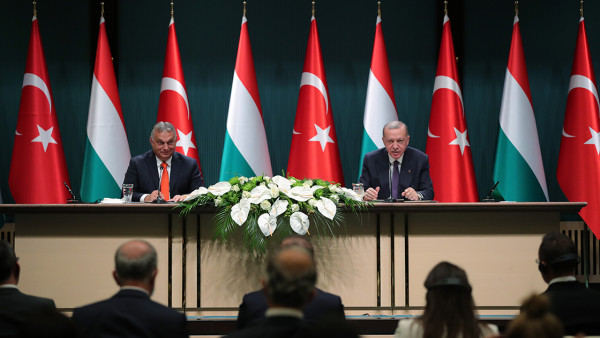 Turkish President Recep Tayyip Erdogan raised the spectre  of opening the Turkish border for refugees and migrants to flock to Greece during a joint news conference in Ankara today with visiting Hungarian Prime Minister Viktor Orban.

Turkish media quoted Erdogan as saying that, “It is ungrateful (for Greece) to say that Turkey is the source of the (refugee) problem when our country hosts about five million refugees.”

The remarks came after Greek Prime Minister Kyriakos Mitsotakis said at a joint news conference with Dutch PM Mark Rutte on 9 November that Turkey has systematically instrumentalised refugees and is to blame for not impeding human smugglers from transporting refugees (on unsafe dinghies, often without life vests) toward Greece, which has saved “hundreds if not thousands” of refugees and migrants.

Mitsotakis noted that in the latest incident, the Hellenic Coast guard saved over 250 migrants who were at risk of drowning south of Crete, and that Greece – which has been in the past confronted with an unprecedented migrant crisis - does this every single day.

Erdogan declared that, “Mr. Mitsotakis and his cohorts spend their days telling lies and do not behave honourably, and that is why they do not engender trust in the region.”

Annoyance over US bases in Greece

Erdogan also expressed his intense consternation over the US presence in Alexandroupolis, not far from the Greek-Turkish border, and other US bases in Greece.

He complained about the expansive US military presence in Greece after the two countries signed a renewed Mutual Defence Cooperation Agreement (MDCA) recently.

“Unfortunately, Alexandroupolis is not just one base – all of Greece has been transformed into a US base. I did not manage to count how many American bases there are in Greece. If we compile them, we get the sense that all of Greece is a US base,” he said.

“Why is all this happening? The US picked the wrong neighbour (to ally with) for themselves and their stance of choosing Greece as their base in the Aegean is wrong,” Erdogan said.

TANEA Team 11 Νοεμβρίου 2021 | 22:34
Share
Δείτε επίσης
Περισσότερα άρθρα για Αγγλική έκδοση
A coarse opposition stance is ill-advised Editorial: Seriousness
We have the weapons. We have fine scientists. We have the experience. We can. Editorial: Urgency
There were delays and tragic omissions in offering proper services to patients Positive Voice in a rough terrain: A look back at the history of HIV/AIDS in Greece
Greece has a multi-faceted policy in its foreign relations and that is how it should continue Editorial: Sobriety in foreign relations
We see irresponsible behaviours and an attitude that the virus is no longer with us Editorial: Behaviours
The virus recognises no geographical borders Editorial: Nobody is safe
Delays and foot-dragging have long led even to the denial of justice Editorial: Expediting justice
Erdogan’s insistence on keeping interest rates low led him to fire three central bankers Editorial: Turkey’s lonesomeness
Turkey traditionally exports its domestic crises Editorial: Turkey's domestic, foreign crises
Nobody has the right to deny their share of responsibility in the common effort Editorial: Joining forces to confront the pandemic
Of intubated patients, 83 percent are unvaccinated or partially vaccinated EODY: 105 COVID-19 deaths, 7,287 infections confirmed in the last 24 hours, 608 intubated
We must continue to insist that the state is obliged to be citizen-friendly Editorial: 'Guinness World Record'
Behind Lukashenko stands Putin, who backs and assists him Editorial: European sovereignty
The pandemic is an issue of life and death, and the protection of public health is a common aim Editorial: Consensus on managing the pandemic, even at the last minute
The measures announced are tantamount to an at least partial lockdown on the unvaccinated Mitsotakis announces partial lockdown on unvaccinated citizizens, tougher enforcement