The PM declared that the chancellor has been a voice of logic and though sometimes measures imposed on Greece were unjust, she took decisive decisions at critical moments. He said that in 2015 she rejected Greece’s ostracism from the EU. 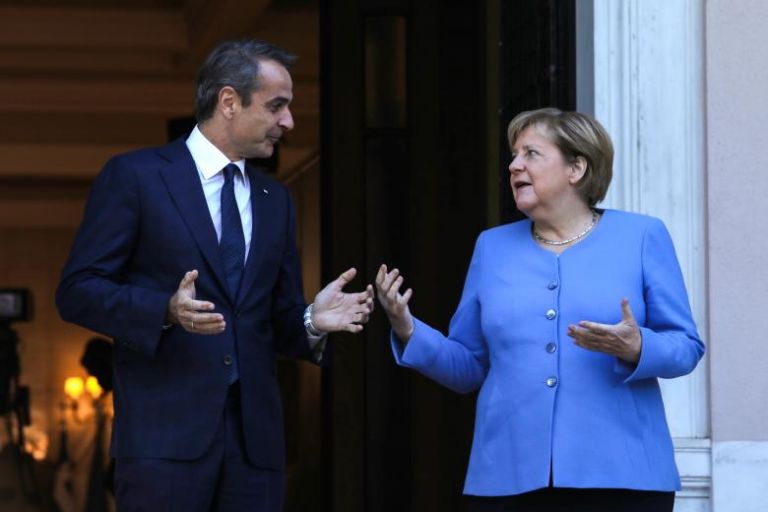 Prime Minister Kyriakos Mitsotakis in welcoming visiting German Chancellor Angela Merkel spoke of a “very different Greece” than the country she dealt with over the last decade.

Noting that he is the eighth prime minister during her 16 years in power with whom the chancellor has held talks, the PM offered a summary of bilateral and EU-Greek relations in that period.

Mitsotakis noted that Greece is much different than it was in the last deficit as it has transcended the fiscal crisis and has marked growth and a lower rate of unemployment.

Regarding economic ties, he said there has been a 20 percent rise in exports to Germany despite the pandemic, and that the number of German tourists visiting Greece doubled compared to the summer of 2020.

The PM declared that the chancellor has been a voice of logic and though sometimes measures imposed on Greece were unjust, she took decisive decisions at critical moments. He said that in 2015 she rejected Greece’s ostracism from the EU and that she finally adopted a courageous stance on the Union’s recovery fund.

He also noted the asymmetric attacks of Turkey on Greece in the Evros border region and the Aegean, and that the EU at some point will have to proceed with sanctions if necessary.

In indirect criticism of Berlin’s soft stance on Ankara’s provocations, he decried the West’s calm in the face of Turkish provocations, noting that the EU’s stance fuels even more Turkey’s provocations.
He underlined that Greece does not accept Ankara’s threats or it disputing of Greece’s sovereign rights.

On the economic front, the PM cited as a “useful legacy” Merkel’s statement that austerity cannot be the answer to everything, and he asserted that Greece’s recent defence agreement with France can serve as a foundation for European defence autonomy.

In his remarks the PM repeatedly stressed the problems with Turkey’s relationship with Greece and the EU more broadly.

“Often, the West’s calm encourages Turkey’s arbitrary actions. The time has come for European principles to be expressed in a European policy, and specifically in European actions against those who violate them, because a good accounting makes for good neighbours,” he said, noting that Athens will continue working to maintain open channels of communication with Turkey.

“Greece wants only friends, and it proves that with the (bilateral) agreements that it is signing. It desires good relations.”

Mitsotakis: Merkel a ‘voice of logic’

The PM said that in periods of difficult condition Angela Merkel was the voice of logic.

“Given the fact that the Europe moves forward with unanimous decisions, it knows well that they are built with agreements,” Mitsotakis said, noting Merkel’s change in stance on the EU Recovery Fund was brave.

The next day in Germany

Regarding the post-Merkel period in Germany, Mitsotakis said he expects that “we plan together the future of Europe and expand already very good Greek-German relations”.

“In short, the future can be expected to be exciting and I bid you farewell with respect. We will proceed with the chancellor’s beloved verb with which she recently summed up her tenure: “I tried.”

“I welcome you with joy and bid you farewell with respect. Athens always awaits your visit as a citizen and as a friend,” the PM said.

In voicing the expectation that Merkel will again visit Greece as a private citizen with a reference to Goethe: “Of all the peoples of the world, the Greeks dream the dream of life in the most beautiful manner.

“If I may interpret Goethe, this will not be my last trip,” the chancellor replied.

TANEA Team 29 Οκτωβρίου 2021 | 14:24
Share
Περισσότερα άρθρα για Αγγλική έκδοση
Lindner’s remarks confirm Greece's economic prospects Editorial: Confirmation
When something is repeated frequently, it is not a chance event Editorial: Alarm
There was massive popular participation in the first round of the election Editorial: Wager
This past summer in the US an average of four million people each month resigned Editorial: A different quality of life
We can no longer tolerate violence and lawbreaking Editorial: Toleration of violence at universities must end
A coarse opposition stance is ill-advised Editorial: Seriousness
We have the weapons. We have fine scientists. We have the experience. We can. Editorial: Urgency
There were delays and tragic omissions in offering proper services to patients Positive Voice in a rough terrain: A look back at the history of HIV/AIDS in Greece
Greece has a multi-faceted policy in its foreign relations and that is how it should continue Editorial: Sobriety in foreign relations
We see irresponsible behaviours and an attitude that the virus is no longer with us Editorial: Behaviours
The virus recognises no geographical borders Editorial: Nobody is safe
Delays and foot-dragging have long led even to the denial of justice Editorial: Expediting justice
Erdogan’s insistence on keeping interest rates low led him to fire three central bankers Editorial: Turkey’s lonesomeness
Turkey traditionally exports its domestic crises Editorial: Turkey's domestic, foreign crises
Nobody has the right to deny their share of responsibility in the common effort Editorial: Joining forces to confront the pandemic