Earthquake in Crete – Tents are set up for 2,500 people who were left homeless – The area is in a state of emergency

In the evening, at 10:00 pm, the Seismic Risk Assessment Committee will meet again 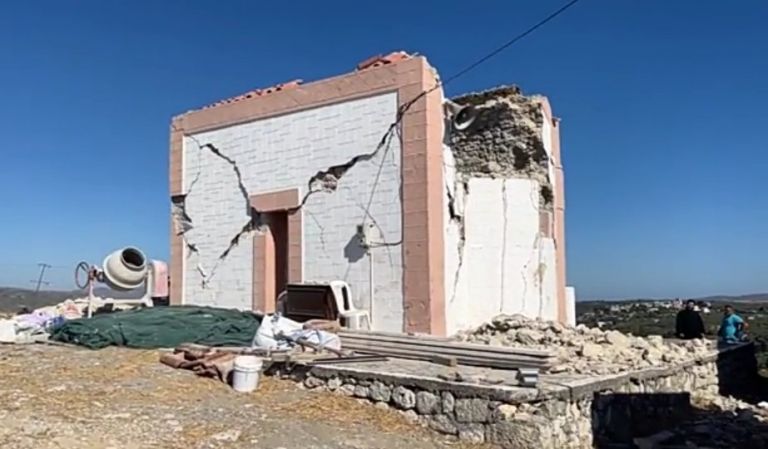 The Minister of Climate Crisis & Civil Protection, Christos Stylianidis, who is in area, said that together with the mayor and the governor and the whole team of local authorities, they decided to set up tents that will be able to accommodate 2,500 people, in order to serve all the families and all the people who should not enter the their homes tonight.

He also announced that the area has been declared a state of emergency, while he added that the injured so far are 12, it seems that they do not have craniocerebral injuries, however there will be continuous information about their state of health.

“We immediately came to the area that suffered the earthquake. We are watching it. You also lived through it here, that we had two earthquakes while we are here and we were trying to coordinate all the services of the local authorities. It seems that a tour should be done in the surrounding area, because in villages around Arkalochori the problems are more, because the houses were older, they had not been included in the seismic code”, said Mr. Stylianidis, while adding that he would go to the old Arkalochori to see and evaluate the buildings there together with the service of the Ministry of Infrastructure.

“We are monitoring the seismic sequence with our scientists, there is a continuous monitoring by the Seismic Risk Group and it informs us about this phenomenon that is in progress. I do not want to replace any scientist, it is not my job, that is why we brought Mr. Lekkas with us. The effort is to serve the people who will be away from home. We will offer shelter and food so that no one is in a difficult position “, stressed Mr. Stylianidis while underlining:” Above all, human lives “.

Asked about how long people will stay on stage, he said: “No one can say, because scientists must be the first to tell us,” while he added that they can not discount if the seismic phenomenon will stop tomorrow, the day after tomorrow. “We as the State, as the Ministry of Climate Crisis & Civil Protection will be constantly here to support the world,” he stressed. He then expressed his condolences to the family of the deceased, saying that he would visit them either now or when he returned and added that they would visit the injured.

“A few words, many deeds. “Let’s go and evaluate the buildings,” he concluded.

Lekkas: The phenomenon is in progress

On his part, the president of OASP, Efthymis Lekkas said: “We are dealing with a peculiar sequence. We all thought we were going into impairment, but we could not prescribe natural phenomena, unfortunately, and we were refuted once again. We have an earthquake of 5.8 degrees in the southern part of the fault. The earthquake was unexpected, which really affected the buildings, and of course (we had) many aftershocks.

“I do not think we can estimate the seismic sequence yet. We have earthquakes of 4.3 – 4.6 and 4.8 degrees. The phenomenon is ongoing. In the evening, at 10:00, the Seismic Risk Assessment Committee will meet again and there we will see with all the scientific data exactly where the phenomenon is going. A phenomenon that is in fact a peculiar phenomenon “.

TANEA Team 27 Σεπτεμβρίου 2021 | 15:45
Share
Δείτε επίσης
Περισσότερα άρθρα για Αγγλική έκδοση
Eight percent of respondents were vaccine deniers and will not get the jab Focus Bari|YouGov Poll: One in five Greeks reluctant to get COVID-19 vax or deniers
Prime Minister Kyriakos Mitsotakis declared today a day of national mourning With a national outpouring of sympathy, Greece bids farewell to Movement for Change leader Fofi Gennimata
Refugee children are dying in European waters Editorial: Duty
Meetings with President Katerina Sakellaropoulou, Archbishop Ieronymos Pope Francis to visit Cyprus, Greece in December
Evangelos Marinakis on CPLP’s bond listing at the Athens Stock Exchange: “Green investments are the future”
Washington concerned about religious freedom of the patriarchate in Turkey Vartholomeos has one-hour meeting with Biden: Religion, rights, and geopolitics on US visit
What a great thing it is to be fighting for your life even as you battle for the common good! Editorial: Standing tall
It is the greatest foreign policy crisis in Erdogan's 19 years in power Following domestic, international uproar Erdogan backs off on expulsion of 10 Western ambassadors
The UN Secretary has warned that humanity is already in a state of emergency Editorial: A duty towards our children
'The UK played a decisive role in achieving Greece’s independence' FM Nikos Dendias: Greece-UK bilateral cooperation agreement to include defence and security issues
Vartholomeos has fervently pursued inter-faith dialogue with the Muslim and Jewish faiths Religion, rights, and geopolitics on Vartholemos' US visit, meetings with Biden, Blinken, Pelosi
At Greek universities progress is battling regression. Editorial: Two worlds
Editorial: Opportunity
Angela Merkel – In Athens on October 28 and 29
If the pandemic is checked, we can hope for much better days Editorial: Turning point for Europe