The new conditions justify the choice to make the environment a national priority. Deliginization, Recovery Fund resources and the new NSRF are powerful financial tools 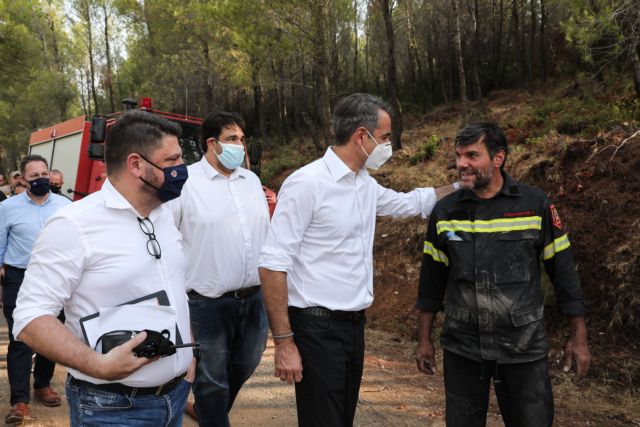 “The climate crisis is here and it shows us that everything needs to change. From the orientation of the Economy, to the energy policy. And from the functioning of the state to the behavior of the citizens. The data require bold solutions for which I am ready “, stressed the Prime Minister Kyriakos Mitsotakis, in the press conference he gave at the General Secretariat of Information and Communication.

“The climate crisis now requires a drastically different approach. The new conditions justify my choice to make the environment a national priority. The de-ligation, the resources of the Recovery Fund and the new NSRF give us very strong financial tools. And with the new climate law that will be passed in the coming months. Greece will submit bold proposals to international forums. Tackling climate change will be a major issue at MED9. “My ambition is to sign the Athens Declaration on tackling climate change in the Mediterranean.”

The economy will recover quickly

“The indications are that the economy will recover quickly, the data from tourism are encouraging and if we continue like this we will exceed the goals we set. We have the financial tools to support the Economy “, said Prime Minister Kyriakos Mitsotakis during the press conference he gave, about the fires.

“The fact that we have managed many crises is a reality but it can not be an excuse for the government not to move forward. In these two years we have promoted important reforms in dealing with crises I believe effectively. Early recourse to the polls would be a sign of weakness and not a sign of strength and confidence,” said Mr. Mitsotakis.

On whether he expects more help from the international community in the climate crisis, Mr. Mitsotakis stressed that it is very important to be able to share resources to deal with fires.

“We need more common means and I will discuss it with my counterparts at the Med 9 conference in Athens,” the prime minister said, stressing that assistance from many countries has been very effective and moving. “It is clear from there and beyond that we are all affected by the climate crisis. We can do more to raise global awareness of what climate change means. We will be led to utter destruction if we do not drastically change the way we live, move, produce energy and cultivate our land. All this must change,” said the prime minister, adding:

“Our decision to close the lignite power plants earlier than we had planned was Greece’s most important contribution to the global effort to reduce greenhouse gases. These units need to be replaced. In the medium term it will be natural gas and in the long term it will be the sun and the wind. That is why we cannot want them to be our own. We can not shout about climate change and oppose any policy that helps to contribute to this effort to tackle it.”

The payment of compensation

Regarding the express procedures for the promotion and payment of compensations and whether there are alternative channels for those who are not familiar with the new technologies but also whether there is a second support plan for Evia that will not return to economic activity next year, The Prime Minister pointed out:

“I think the pandemic has proven that everyone has the ability to take advantage of technology,” he said, noting that something like this was said to happen with appointments.

He added that this problem will be addressed as the state aid process has been simplified and that the number of those entitled to immediate compensation for total destruction is finite.

He assured that the know-how we have from the management of previous disasters will be utilized and “we will move even faster”, expressing his confidence in Mr. Triantopoulos who has successfully managed other natural disasters in the past, such as dealing with the consequences of stormfront Ianos.

“If additional measures are needed, I would like to discuss them with Mr. Benos,” he added, noting, of course, the need for immediate assistance in specific areas.

In addition, he underscored the importance of keeping people in their place in addition to benefits. The aim, he said, is to keep people in their place, not to destroy the productive social fabric and to direct public and private resources there. However, if it is found that other support measures will be required, we will not hesitate, the Prime Minister underlined.

“Direct interventions in the forests are paramount. Incentives are given to involve the private sector in the effort. The institution of the reforestation sponsor is a very important initiative, where the private companies that have know-how to undertake reforestation projects and deliver the final result to the state “, said Mr. Mitsotakis.

He also stressed that the Civil Protection Agency and the Fire Brigade are preparing a Special Unit of Forest Operations with 500 people, who will have a greater chances of entering the forest and dealing with the fire before it reaches the road network. “This can be done in 2022,” he said.

Asked about a more specific definition of “bold solutions” and “bold decisions”, to which the Prime Minister referred to in his other answers, he stressed:

From there, a question arises as to where these will be placed. In order not to put the cart before the horse, we have started to review the national spatial plan for renewable energy sources. To see where we can really put wind turbines and photovoltaics but also where we want to put them.

When we have the complete mapping and I am referring mainly to large facilities, we will be able to make it easier for investors to know if and where they can go.

A completely new field is the installation of wind turbines at sea but this also needs attention,” said the Prime Minister

TANEA Team 12 Αυγούστου 2021 | 14:53
Share
Περισσότερα άρθρα για Αγγλική έκδοση
Editorial: Turning a page
'This is no longer about climate change. This is about addressing a climate crisis.' Mitsotakis focuses on pandemic, climate crisis, and Greek-Turkish relations in UN speech
The head of SYRIZA’s Citizen’s Protection policy section simply followed his party’s mannerism Editorial: Mannerism
The cottage industry of lawsuits against educators constitutes a disruption of social peace Editorial: Decisiveness
For the Ecumenical Patriarchate, which has spiritual authority over the Church in America, Elpidophoros, 54, is the best and the brightest that it has to offer. Tempest in a teapot: The attacks on Archbishop Elpidophoros and foreign policy stunts
US President Joe Biden has chosen a particular mixture of policies Editorial: Doctrines
Approximately 160,000 people in Greece today are afflicted with Alzheimer’s disease Editorial: Reminder
Unrepentant, Tsipras unleashed charges against the government and announced handouts Editorial: A return to the past
The country is in great need of stability., not electoral surprises Editorial: Normalcy
The EU’s adjustment of financial rules has facilitated the situation Editorial: Lessons
Editorial: The conundrum of early elections
It is common knowledge that all political parties seek the vote of Greece’s youth Editorial: Greece’s youth
In a democracy, elections cannot serve as a weapon for prime ministers Editorial: The need for electoral stability
Mitsotakis rules out any prospect of political consensus with SYRIZA
Merkel’s statement should lead us collectively to a rethinking of what happened and not reflexive indignation Editorial: The price of imprudent politics