Preparations for mass vaccinations comes as the identification of a highly infectious new strain of the coronavirus in Britain caused chaos across the region, with countries shutting off travel ties with the UK and disrupting trade ahead of Christmas. 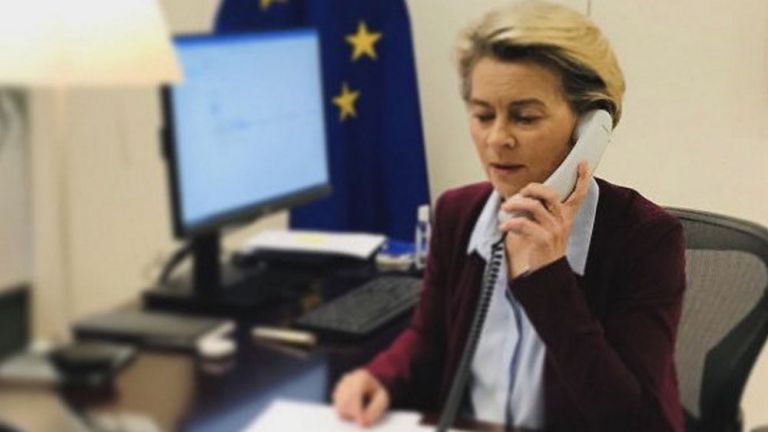 Europe’s medicines regulator on Monday approved the use of the COVID-19 vaccine jointly developed by U.S. company Pfizer and its German partner BioNTech, putting Europe on course to start inoculations within a week.

European Union countries including Germany, France, Austria and Italy have said they plan to start vaccinations from Dec. 27 as Europe tries to catch up with the United States and Britain, where inoculations began earlier this month.

Having gained the green light from the European Medicines Agency (EMA), the final step is approval by the European Commission, which is expected later on Monday.

“Now we will act fast. I expect a European Commission decision by this evening,” Commission head Ursula von der Leyen wrote on Twitter.

Von der Leyen had already targeted the start of vaccinations over the Dec. 27-29 period.

"It’s a decisive moment in our efforts to deliver safe & effective vaccines to Europeans!" she said in a tweet.

Preparations for the vaccine rollout come as the identification of a highly infectious new strain of the coronavirus in Britain caused chaos across the region, with countries shutting off travel ties with the UK and disrupting trade ahead of the Christmas holiday.

EMA officials told a news briefing that it was highly likely the vaccine would work against the new variant of the coronavirus.

The pandemic has killed about 470,000 Europeans and is picking up pace in the winter months, crushing economies in the process. Many governments have imposed tighter restrictions on households to try to curb a second wave of infections and avoid overwhelming healthcare systems.

TANEA Team 21 Δεκεμβρίου 2020 | 22:43
Share
Δείτε επίσης
Περισσότερα άρθρα για Αγγλική έκδοση
Greece’s role as an energy hub must be emphasised Editorial: Opportunities
Mitsotakis-Biden talks: Greek-Turkish relations, the war in Ukraine, wayward Turkey’s new role in NATO
It is not in Greece’s interest for Turkey to be isolated or humiliated Editorial: Opportunity
The Marshall Plan prioritised rebuilding export capacity How should a Marshall Plan for Ukraine work?
Drop in COVID-19 deaths - number of infections, intubated patients stable, hospital admissions rise
Policing of universities is an unpleasant but necessary measure Editorial: No excuse
A strict price inspections policy is needed to curb untrammelled price hikes Editorial: Dealing with inflation
Editorial: Axes
Ta Nea has repeatedly called for decisive action Editorial: University police force plan on the back burner
Everything depends on how the social media are used Editorial: Words
SYRIZA’s gains in 2012 were a Pyrrhic victory. Editorial: Populism
There will be a 600 euro cap on the rebate Amidst uproar over skyrocketing energy costs, Mitsotakis announces rebates for households
This is the 12th anniversary of the deadly arson attack Editorial: Radio silence
Many cases involving extremely serious crimes have not been tried Editorial: A bitter political legacy
EODY has recorded a total of 3.34mn COVID-19 infections EODY: 32 COVID-related deaths, over 8,000 infections, 660 reinfections, 231 intubated patients