The United States, Italy and Spain were the top exporters of arms to Turkey from 2015-2019, according the Stockholm International Peace Research Institute. 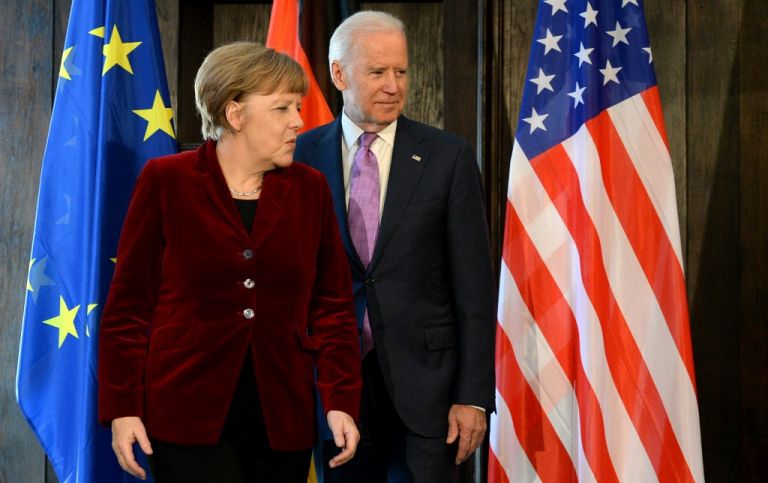 EU leaders plan to discuss arm exports to Turkey with NATO allies and Washington, German Chancellor Angela Merkel said today, after Greece’s push at the December 10-11 EU summit for an arms embargo on Ankara was dismissed.

Merkel (file photo with US President-elect Joe Biden)  spoke after a summit where the EU’s 27 leaders agreed to prepare limited sanctions on Turkish individuals over Ankara’s energy exploration dispute with Greece and Cyprus, but postponed discussions on any harsher steps until March.

“We … spoke about how questions about arms exports must be discussed within NATO. We said that we want to coordinate with the new U.S. administration about Turkey,” Merkel told a news conference. Many EU states are also members of NATO.

Merkel’s comments underlined a hardening stance on Turkey among EU governments, many of whom have in the past resisted punitive measures on Ankara, a NATO ally, candidate for EU membership and host to Syrians fleeing civil war who would otherwise seek refuge in Europe.

But EU states have also grown increasingly critical of Turkey’s involvement in Libya and its purchase of a Russian weapons system, among other flashpoints.

The United States is already poised to impose sanctions on Turkey over those Russian purchases, Reuters reported yesterday.

Turkey’s foreign ministry on Friday rejected what it called the EU summit’s “biased and illegal” approach on the sanctions.

Turkish President Tayyip Erdogan called on the United States and EU governments to stop being influenced by what he called anti-Turkish lobbies but, in an unusually conciliatory tone, said he believed issues could be solved through dialogue.

Turkey says it is operating in waters on its own continental shelf or areas where Turkish Cypriots have rights. It has also repeatedly accused Greece of avoiding bilateral talks over their conflicting maritime claims and has accused the European Union of being biased towards Greece and Turkey.

The EU exported only 45 million euros worth of arms and ammunition to Turkey in 2018, including missiles, according to EU statistics office Eurostat, but sales of aircraft amounted to several billion euros.

The United States, Italy and Spain were the top exporters of arms to Turkey from 2015-2019, according the Sweden-based Stockholm International Peace Research Institute (SIPRI), a leading conflict and armaments think tank.

EU governments agreed in October 2019 to limit arms sales to Turkey but stopped short of a bloc-wide ban. The bloc currently bans arms sales to several states including Russia, Belarus, Syria and Venezuela.

The European Union and NATO are planning to hold a summit with U.S. President-elect Joe Biden after he takes office in January.

TANEA Team 13 Δεκεμβρίου 2020 | 08:03
Share
Περισσότερα άρθρα για Αγγλική έκδοση
People want answers, persuasive plans, and arguments Editorial: Maturation
The pandemic and citizens’ fears regarding inflation have shocked households Metron Analysis poll: SYRIZA trails New Democracy, KINAL-PASOK skyrockets
It is imperative for the weapons programme to be implemented immediately Editorial: Arrivals
The charges of the victim garnered attention nationwide Editorial: Support
Greece is a peaceful Western country Editorial: Vigilance
Both SYRIZA and PASOK are in a transitional phase Editorial: Changes
Tsipras posts on the social media and frequently as possible Editorial: Obligations
Universities have become a sort of state within the state Editorial: Enough is enough!
Nobody for whatever reason has the right to beat a professor Editorial: Zero tolerance
The shift in America’s priorities should come as no surprise Editorial: Fluidity
We have the weapons, the experience, and obviously the collective will Editorial: Transcending the pandemic
How do you negotiate with Vladimir Putin? Editorial: Dilemma
Editorial: Phenomenon
Maintaining tensions does not contribute to dialogue or good neighbourly relations Editorial: Pragmatism in Greek-Turkish relations
The alarm bell of daily life is urgently ringing Editorial: Alarm bell