It will be impossible to station a police contingent outside of all Patras churches and the last thing the government wants is clashes between police and faithful. 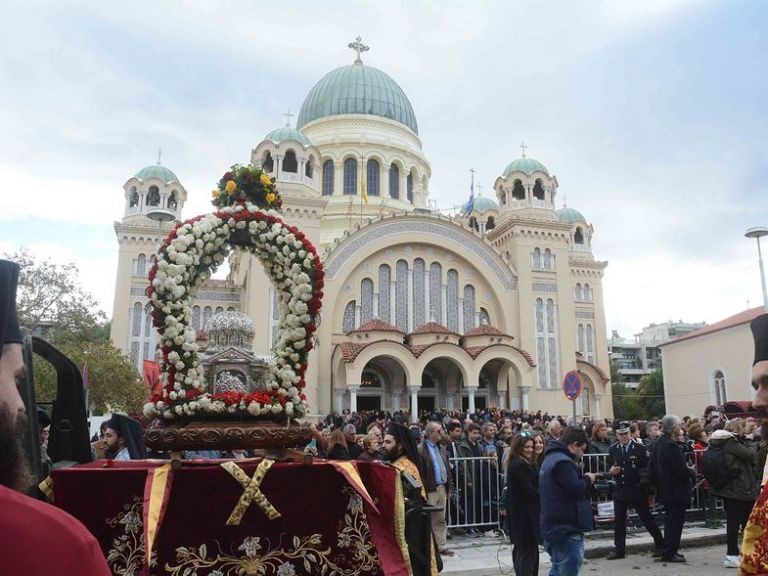 Prime Minister Kyriakos Mitsotakis held consultations today with top members of the expert National Committee on COVID-19 just three days ahead of a potential super spreader event in the port city of Patras, Greece’s third largest city and the largest in the Peloponnese with a population of 167,000 residents.

The 30 November feastday of the city’s patron saint, Saint Andrew (file photo), annually draws enormous crowds of worshipers who pack the 2,000 sq m cathedral and masses of faithful fill a large radius around the church.

Mitsotakis has ratcheted up the pressure on the mayor of Patras, Kostas Peletidis, and regional prefect Nektarios Farmakis to cooperate in strictly enforcing public health measures and in get across the message that people should stay home and not congregate outside of churches, which have been closed by the government since the beginning of the current lockdown on 6 Νοvember.

Peletidis, however, noted that the celebrations are organised by the Metropolitan diocese and that the municipality is responsible only for the annual outdoors bazaar in the area surrounding the church, which will be banned this year.

Thousands of small merchants travel around the country all year shuttling from town to town peddling their wares on the eve of local feast days.

Metropolitan bishop Chrysostomos of Patras called on the faithful in his diocese to stay home, but as was seen in the first lockdown priests have in many cases surreptitiously opened churches from side and back doors.

Moreover, it will be impossible to station a police contingent outside of all Patras churches and the last thing the government wants is clashes between police and faithful.

The mayor of Patras pointed out to the PM that attention must be paid to prevent gatherings at home for people celebrating their name day.

The PM’s office said in a statement that Mitsotakis “underlined (to the mayor and prefect) the fact that there has recently been an increased public health burden on the region and that this fact mandates that citizens exercise greater caution and he requested that local government officials contribute to that”.

The PM is dispatching Citizen’s Protection Minister Michalis Chrisohoidis (photo) to Patras tomorrow in order to organise on the ground the strict public order measures that will be needed to prevent the gathering of many hundreds of worshipers – aside from local residents pilgrims traditionally flock to the city from other parts of Greece as well each year - outside of churches.

Chrisohoidis will hold talks with and instruct police brass, the mayors of Patras and surrounding cities, Metropolitan Chrysostomos, the directors of the cities two hospitals, and the rector of Patras University.

On November 17 Chrysohoidis deployed an army of 6.000 policemen to prevent gatherings to mark the anniversary of the 1973 Athens Polytechnic students’ uprising against the junta.

That was in the end effectively to guard about 200 KKE communist party members who staged a brief march on the US Embassy and left and several hundred who marched from Omonia Square to Panepistimiou Street in central Athens with strict social distancing . It was was blocked by police shortly after it started and then was broken up with water cannons even though the demonstrators were not moving or agitating because it was in defiance of a government ban on all outdoors gatherings of over four individuals.

The only people who were forced to flout social distancing rules were policemen who were wearing masks but in several cases packed together in clusters of a few hundred.

Kid gloves for the Church

The government so far has treated the Orthodox Church of Greece with kid gloves as regards implementation of restrictions.

That was evidenced when on 26 October thousands of faithful gathered inside and outside the church of Saint Demetrios, the city’s patron saint, to honour the dual celebration of the feast day and the 1912 liberation of the city from the Ottomans even as Bulgarian troops were headed toward the city to occupy it.

Top virologist and spokesman for the National Committee on COVID-19 Gkikas Magiorkinis, an Athens University assistant professor with an international reputation who advises the PM, recently stated that aside from the seasonal drop in temperature in Northern Greece a super spreader event in October contributed significantly to the very extensive and intense spread of the disease in Thessaloniki, which is in a dire situation with hospitals jam-packed and sending COVID-19 cases to other cities.

Though he placed the event in mid-October, before the religious festival, the feastday is the only known such event in the city.

PM's mea culpa: 'We should have acted sooner in Thessaloniki'

The PM is scheduled to travel Thessaloniki tomorrow for talks with local officials and to visit the Papanikolaou and Ippokrateio hospitals that are reeling under the crushing weight of operating far beyond COVID-19 caseload capacity- patients are being airlifte to other cities - and with doctors and staff struggling to fight exhaustion.

Mitsotakis conceded during parliamentary debate on management of the epidemic  that if he could turn back the clock he would have imposed restrictive measures in Thessaloniki earlier.

He did not mention whether any member of the committee had advised him to do so.

Magiorkinis has said that the viral load in Thessaloniki (1.1 mn residents) is five times greater than the much larger region of Attica, which has a population of 3.74 mn.

He has also noted that the closely knit structure of Greek familes (where it is not uncommon for youth to live with parents into their 30’s) has been a significant transmission factor.

TANEA Team 27 Νοεμβρίου 2020 | 21:41
Share
Δείτε επίσης
Περισσότερα άρθρα για Αγγλική έκδοση
Over the last days the image of our country has not been attractive Editorial: A different image of Greece
There will be more weather crises in the future Editorial: Deficiencies
This young woman heard the message of other women that preceded her Editorial: Catharsis
Balances with the Russian side are very delicate and must be maintained Editorial: Composure
'Greece is a significant and wise actor in this part of Europe' Kosovo FM Donika Gervalla–Schwarz: ‘We are not begging for recognition from Greece’
People want answers, persuasive plans, and arguments Editorial: Maturation
The pandemic and citizens’ fears regarding inflation have shocked households Metron Analysis poll: SYRIZA trails New Democracy, KINAL-PASOK skyrockets
It is imperative for the weapons programme to be implemented immediately Editorial: Arrivals
The charges of the victim garnered attention nationwide Editorial: Support
Greece is a peaceful Western country Editorial: Vigilance
Both SYRIZA and PASOK are in a transitional phase Editorial: Changes
Tsipras posts on the social media and frequently as possible Editorial: Obligations
Universities have become a sort of state within the state Editorial: Enough is enough!
Nobody for whatever reason has the right to beat a professor Editorial: Zero tolerance
The shift in America’s priorities should come as no surprise Editorial: Fluidity