Editorial: Lives must be saved

The opposition’s comparing the government with a junta, because it banned a commemorative march, especially when it is following the recommendations of the National Committee on Public Health is entirely unjustified. 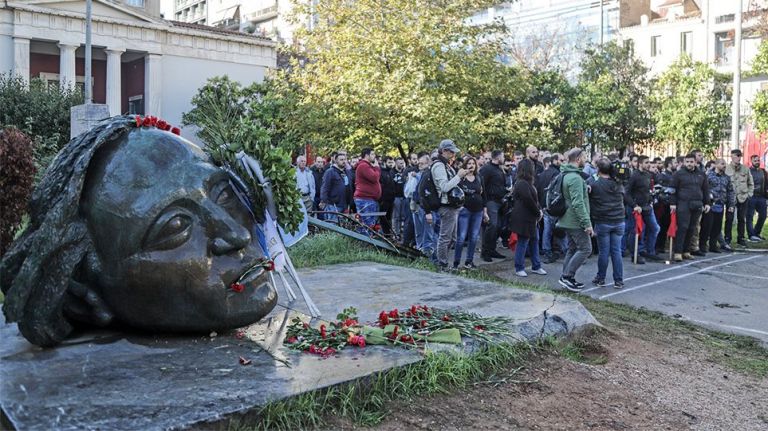 Deaths from the COVID-19 epidemic in Greece are now in excess of 1,100, the number of intubated patients is constantly increasing, and the National Health System is at risk of collapsing.

The second wave of the pandemic has reached its peak and it depends on the behaviour of us all whether it will continue to rage in the coming weeks or whether it will be stemmed.

The emergency conditions once again mandated restriction of our rights including freedom of assembly.

Just as the religious ceremonies celebrating the October 26 feastday of Saint Demetrios in Thessaloniki should not have taken place and just as the 28 October parades for OXI Day, when Greece refused to surrender to fascist Italian forces, were banned, so too marches commemorating the 17 November, 1973, Athens Polytechnic student uprising against the colonels’ dictatorship  (Photo: 2019 commemoration) should not take place.

It is a matter of public health, which transcends even the issue of public security.

Perhaps the government could have handled the matter earlier and in a different manner.

Undoubtedly reaching an understanding and democratic procedures should always be preferred to autocratic methods and bans.

That, however, in no way justified the opposition’s comparing the government with a junta, especially when the government is following the recommendations of the National Committee on Public Health.

Such characterisations are outrageously exaggerated, off the mark, and unworthy under the current circumstances.

The insistence of certain political forces that commemorative gatherings and marches should take place these days clearly does not contribute to achieving that crucial objective.

TANEA Team 16 Νοεμβρίου 2020 | 23:03
Share
Δείτε επίσης
Περισσότερα άρθρα για Αγγλική έκδοση
We can no longer tolerate violence and lawbreaking Editorial: Toleration of violence at universities must end
A coarse opposition stance is ill-advised Editorial: Seriousness
We have the weapons. We have fine scientists. We have the experience. We can. Editorial: Urgency
There were delays and tragic omissions in offering proper services to patients Positive Voice in a rough terrain: A look back at the history of HIV/AIDS in Greece
Greece has a multi-faceted policy in its foreign relations and that is how it should continue Editorial: Sobriety in foreign relations
We see irresponsible behaviours and an attitude that the virus is no longer with us Editorial: Behaviours
The virus recognises no geographical borders Editorial: Nobody is safe
Delays and foot-dragging have long led even to the denial of justice Editorial: Expediting justice
Erdogan’s insistence on keeping interest rates low led him to fire three central bankers Editorial: Turkey’s lonesomeness
Turkey traditionally exports its domestic crises Editorial: Turkey's domestic, foreign crises
Nobody has the right to deny their share of responsibility in the common effort Editorial: Joining forces to confront the pandemic
Of intubated patients, 83 percent are unvaccinated or partially vaccinated EODY: 105 COVID-19 deaths, 7,287 infections confirmed in the last 24 hours, 608 intubated
We must continue to insist that the state is obliged to be citizen-friendly Editorial: 'Guinness World Record'
Behind Lukashenko stands Putin, who backs and assists him Editorial: European sovereignty
The pandemic is an issue of life and death, and the protection of public health is a common aim Editorial: Consensus on managing the pandemic, even at the last minute