The government has not implemented any of the university security measures that have been discussed such as the establishment of a campus police force or the mandatory display of an ID in order to enter university campuses and buildings. 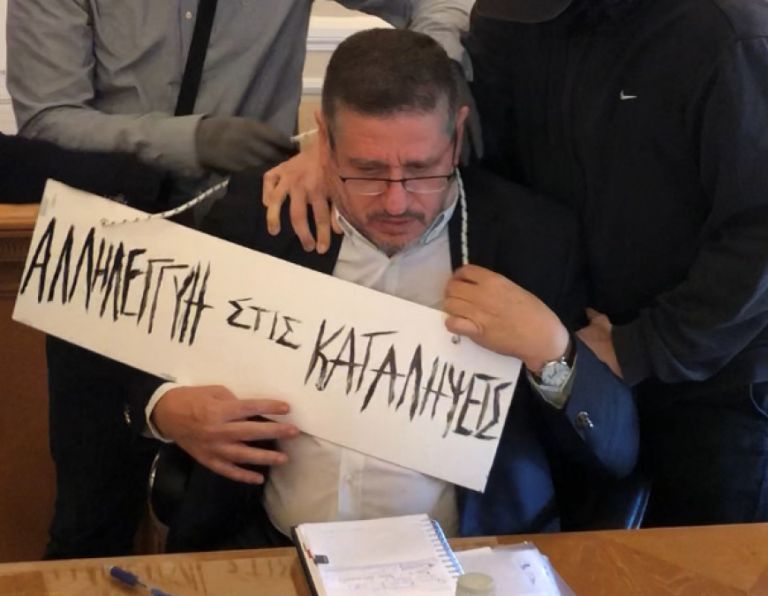 “Toleration is impermissible,” our editorial last Friday underlined regarding the fascistic attack against the rector of Athens’ Economic University (ASOEE).

The repulsive photograph released by the culprits after their action makes it clear that a universal reaction is urgently needed.

The photo shows rector Dimitris Bourantonis with his head hanging down and sitting at a desk with a notebook in front of him and a hand on his right shoulder. He is holding with both hands a sign hung around his neck with rope stating "SOLIDARITY with OCCUPATIONS" (photo).

From now on whoever remains silent in the face of such actions is co-responsible. Whoever tolerates them shares the guilt.

Whether these statements are categorical or accompanied by provisos regarding the need to combat government policy they must be backed with concrete actions.

Violence in universities was tolerated by the previous government due to its ideological fixations and eradicating it should have been a top priority for the current liberal government that succeeded it.

Yet, despite grand declarations none of the measures that have been discussed were implemented, including the establishment of a campus police force or the mandatory display of an ID in order to enter university campuses and buildings.

One sees resistance and objections, some of which are legitimate, and then we forget about the issue until the next provocation, whether that be vandalism or an attack on yet another rector.

This cannot go on. Our country must decisively fend off every form of totalitarian behaviour, as President Katerina Sakellaropoulou characterised the attack on the rector.

There is an urgent need to arrest the culprits and guard the university I order to avert any repetition by copycats as these are trying times.

TANEA Team 2 Νοεμβρίου 2020 | 22:49
Share
Δείτε επίσης
Περισσότερα άρθρα για Αγγλική έκδοση
The US ambassador says Biden has “opened up a new vocabulary of cooperation” with Greece Pyatt see deeper US-Greece strategic ties under Biden administration
The case will be re-tried in the framework now set by the Council of State Bombshell Council of State ruling accepts state’s vaccine side-effect liability
May Day should be honoured with a single march each year Editorial: Unity
Transcending the collective crisis will require leadership and not troublemakers Editorial: Messages
After a six-month shutdown, workers in the restaurant business laid the tables Editorial: The first step
The government has repeatedly said that the existing framework is outdated Battle royal looms over government bill overhauling labour relations, limiting strike action
The labour trade union movement is an invaluable and irreplaceable weapon of workers An urgent need for the rebirth of the trade union movement
Editorial: The pendulum of American politics
The thirty-somethings rushed to be vaccinated for the sake of their families and their friends Editorial: Front-and-centre
The parliamentary vote on approval of the plan’s implementation is expected before Easter Editorial: Liquidity
Turkey is keenly aware of the fact that there is a new player on the geopolitical chessboard Editorial: A just act
Biden takes historic step to recognise Armenian Genocide
National COVID-19 Committee spokesman explain public health decisions, planning for future
The EU Recovery Fund is enormously important and should not be viewed as routine aid or subsidies Editorial: A crucial green light from Germany
Editorial: A responsible Easter