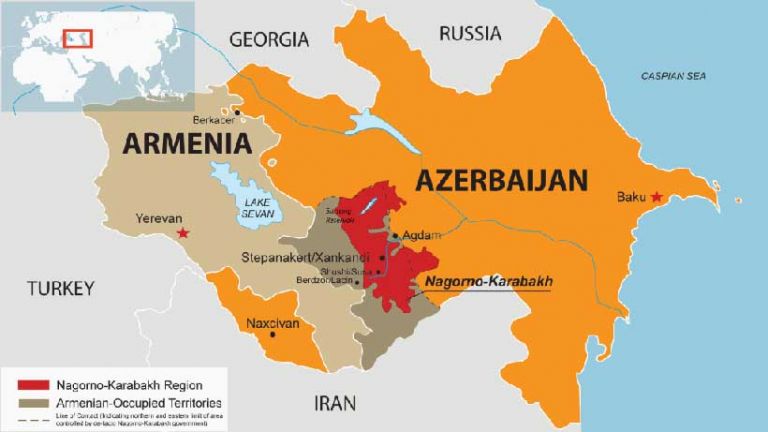 Armenia and Azerbaijan accused one another on Tuesday of firing directly into each other’s territory and rejected pressure to hold peace talks as their conflict over the enclave of Nagorno-Karabakh threatened to mushroom into all-out war.

Both reported firing from the other side across their shared border, well to the west of the breakaway Nagorno-Karabakh region over which fierce fighting broke out between Azeri and ethnic Armenian forces on Sunday.

The incidents signalled a further escalation of the conflict despite urgent appeals from Russia, the United States and others to halt it.

The conflict has reignited concerns about stability in the South Caucasus region, a corridor for pipelines carrying oil and gas to world markets.

Nagorno-Karabakh is a breakaway region inside Azerbaijan but run by ethnic Armenians and backed by Armenia. It broke away from Azerbaijan in a 1990s war but is not recognised by any country as an independent republic.

Dozens of people have been reported killed and hundreds wounded since clashes between Azerbaijan and ethnic Armenian forces broke out on Sunday, threatening to draw in neighbours including Azerbaijan’s close ally Turkey.

After a closed-door discussion on Tuesday the 15-member U.N. Security Council «expressed concern» about the clashes, condemned the use of force and backed a call by U.N. Secretary-General Antonio Guterres for an immediate halt to fighting.

Further stoking tensions between the two former Soviet republics, Armenia said a Turkish F-16 fighter jet had shot down one of its warplanes over Armenian airspace, killing the pilot.

It provided no evidence of the incident. Turkey called the claim «absolutely untrue», and Azerbaijan also denied it.

«The international community should decisively condemn the aggression of Azerbaijan and the actions of Turkey and demand Turkey get out of this region,» Pashinyan told Russian state TV.

«The military presence of Turkey in this region…will bring further escalation and expansion of the scale of the conflict.»

Azeri leader Aliyev accused Armenia of fabricating the plane incident. «Turkey is not a party to the conflict, in no way participates in it and there is no need for this,» he said.

Aliyev said Azerbaijan was calling up tens of thousands of reservists under a partial mobilisation announced on Monday.

«We are able to punish the aggressor ourselves so that he would not even dare to look in our direction,» he said.

Any descent into all-out war could threaten to drag in not only Turkey, but Russia. Moscow has a defence alliance with Armenia, but also enjoys close relations with Azerbaijan.

The Kremlin said President Vladimir Putin spoke by phone to Pashinyan for the second time since the start of the crisis and said all sides should take measures to de-escalate. It has not made public any contacts between Putin and Aliyev.

The Kremlin said Moscow was in constant contact with Turkey, Armenia and Azerbaijan. Any talk of providing military support for the opposing sides would only add fuel to the fire, it said.

U.S. Democratic presidential candidate Joe Biden tweeted: «With casualties rapidly mounting in and around Nagorno-Karabakh, the Trump Administration needs to call the leaders of Armenia and Azerbaijan immediately to de-escalate the situation. It must also demand others – like Turkey – stay out of this conflict.»

Pashinyan told the BBC in an interview that Azeri forces had shelled villages and towns in Nagorno-Karabakh and inside Armenia itself on Tuesday.

«There are casualties among both military and civilians. Dozens are killed and hundreds are wounded,» he said.

Azerbaijan’s prosecutor’s office said 12 Azeri civilians had so far been killed and 35 wounded by Armenian fire. The Azeri side has not disclosed military casualties.

Nagorno-Karabakh has reported the loss of at least 84 soldiers.

«What can I say? It’s a war. We hear air raids several times a day and hide in bomb shelters,» Albert Voskanyan, a resident of the enclave’s capital Stepanakert, told Reuters.

Armenian officials said earlier that a civilian was killed in an Azeri attack on the Armenian town of Vardenis, more than 20 km (12 miles) from Nagorno-Karabakh. They said a bus caught fire in the town after being hit by an Azeri drone.

Azerbaijan’s defence ministry said that from Vardenis the Armenian army had shelled the Dashkesan region inside Azerbaijan. Armenia denied those reports. (Additional reporting by Margarita Antidze in Tbilisi, Riham Alkousaa in Berlin, Gabrielle Tétrault-Farber in Moscow and Ece Toksabay in Ankara.

TANEA Team 30 Σεπτεμβρίου 2020 | 10:10
Share
Περισσότερα άρθρα για Αγγλική έκδοση
Meetings with President Katerina Sakellaropoulou, Archbishop Ieronymos Pope Francis to visit Cyprus, Greece in December
Evangelos Marinakis on CPLP’s bond listing at the Athens Stock Exchange: “Green investments are the future”
Washington concerned about religious freedom of the patriarchate in Turkey Vartholomeos has one-hour meeting with Biden: Religion, rights, and geopolitics on US visit
What a great thing it is to be fighting for your life even as you battle for the common good! Editorial: Standing tall
It is the greatest foreign policy crisis in Erdogan's 19 years in power Following domestic, international uproar Erdogan backs off on expulsion of 10 Western ambassadors
The UN Secretary has warned that humanity is already in a state of emergency Editorial: A duty towards our children
'The UK played a decisive role in achieving Greece’s independence' FM Nikos Dendias: Greece-UK bilateral cooperation agreement to include defence and security issues
Vartholomeos has fervently pursued inter-faith dialogue with the Muslim and Jewish faiths Religion, rights, and geopolitics on Vartholemos' US visit, meetings with Biden, Blinken, Pelosi
At Greek universities progress is battling regression. Editorial: Two worlds
Editorial: Opportunity
Angela Merkel – In Athens on October 28 and 29
If the pandemic is checked, we can hope for much better days Editorial: Turning point for Europe
Record-breaking over-subscription for CPLP bond issue
We have a duty to ensure for families a network of protection in our schools. Editorial: Maintaining balances
We have the power to leave behind this unprecedented crisis. Editorial: Exiting the pandemic