'What we have achieved is to raise awareness of Europe as a whole about the strategic importance of the Mediterranean basin and especially of the Eastern Mediterranean,' the PM said. 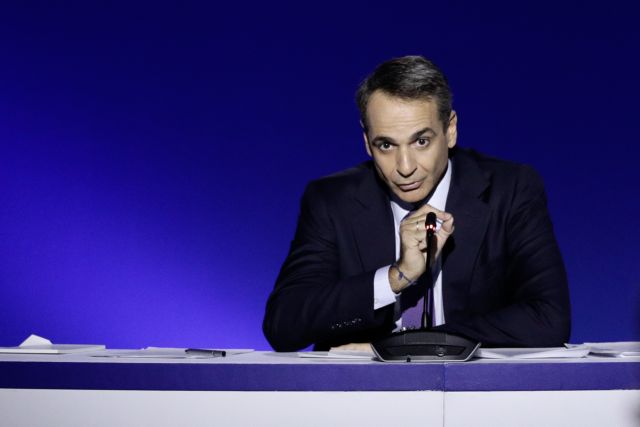 Prime Minister Kyriakos Mitsotakis at a major annual press conference today depicted Greece's economic downturn to the global economic recession caused by the Covid-19 pandemic and laid out his plans to bolster businesses and labour and to prepare for the future stages of the pandemic.

"Let's start with the fact that we are talking about a global recession. It is the biggest economic crisis since 1929, but Greece, compared to other European countries, is performing not as bad as it was initially estimated," Mitsotakis said during at the Thessaloniki Helexpo Forum and added: "We supported the real economy with a forward-looking and constantly evolving package. We will support  society and especially the most vulnerable ones. And the country has a lot of cash reserves and if we must spend more public money, we will do so."

"The return of (the Turkish oil and gas exploration ship) Oruc Reis to Antalya is a positive first step. I really hope this first step will be followed by others. If there are steps towads this direction, Greece is ready to start a new cycle of exploratory contacts with Turkey."

"Greece has strong alliances and dialogue is the only way. Dialogue in good faith is the main way to deal with the only problem we have, which is the delimitation of maritime zones," he said.

Mitsotakis explained that the current approach is different as some significant investments are being made, but it is recognised that the armed forces are above all the human resources and for this reason 15 thousand recruitments will be made in the following five years.

"Rafales (French war palnes) will replace the older Mirage 2000", he noted and added that his government hopes that the first aircraft will arrive in Greece in the middle of 2021 and that the procedure will be completed by the beginning of 2022 at the latest.

Referring to the refugee issue, he said: "What happened in Moria - which is a tragedy - must be seen as an opportunity. Firstly to reactivate Europe in the direction of solidarity and secondly to create a new reception and identification centre that will not carry the negative elements of Moria, which is identified with the mismanagement of the refugee issue. There will be a permanent reception and identification centre in Lesvos."

I have asked the EU to have more involvement in the management of the new reception and identification centre, he said and added that the government has dealt with the problem of unaccompanied minors in a humanitarian manner.

"Yesterday I spoke with Chancellor Angela Merkel about how Germany can welcome some families who have already been granted asylum," he said, reiterating that the EU could not fail in the  management of refugees for a second time.

"The Eastern Mediterranean is a sea of vital interests for Europe as a whole," Mitsotakis noted.

On the re-opening of schools on Monday, the PM stated:

"It is important that schools open on time. We recognise that distance learning can be helpful but it cannot replace schools. The schools will open tomorrow and everything will be ready. Greece is the only European country that will offer free masks to all students and teachers,"
Moreover, he called on everyone to show composure and optimism on Monday at schools.

The prime minister also promised that pensions will not be cut while he also referred to government's announcements to support farmers.

"The issue has been closed since Greece ratified an international agreement. We have repeatedly expressed reservations, but we have also said that Greece is a state governed by the rule of law and respects international ratified agreements," the Prime Minister said answering a question about the agreement with North Macedonia.

"What is not closed is the correct implementation of a problematic, in our opinion, agreement. We have reservations which we will discuss with the Prime Minister of North Macedonia. I will meet him, as well as the Prime Minister of Albania, in the framework of the Economist meeting during the week. Greece must play a leading role in the Balkans," Mitsotakis added.

TANEA Team 13 Σεπτεμβρίου 2020 | 23:11
Share
Δείτε επίσης
Περισσότερα άρθρα για Αγγλική έκδοση
Ankara is laying the groundwork for a feverish and tense summer Editorial: Responding to the challenge of Turkish provocations
The new cadres are fresh faces without much experience in politics Editorial: A new generation at the helm in PASOK
The state also has a role to play and it must act quickly Editorial: Dealing with judicial delays
The US-Greece relationship is based on mutual respect Editorial: American vote of confidence in Greece
Turkey and Greece are moving in opposite directions Editorial: Turkey's dangerous games
The Ukrainians are fighting on home turf and have very high morale Dinner with Zelensky: the character of a Ukrainian hero
The PM is also mulling a substantial cabinet reshuffle Mitsotakis no longer rules out early elections, possible autumn dates floated
Editorial: A scourge at our schools
When time is of the essence, the government has a duty to act Editorial: It is high time for reforms
Mitsotakis underlined Greece’s crucial geostrategic position PM Kyriakos Mitsotakis’ historic speech to Joint Session of US Congress (full text)
A party without self-criticism and renewal cannot move forward Editorial: Political parties transforming
Greece’s role as an energy hub must be emphasised Editorial: Opportunities
Mitsotakis-Biden talks: Greek-Turkish relations, the war in Ukraine, wayward Turkey’s new role in NATO
It is not in Greece’s interest for Turkey to be isolated or humiliated Editorial: Opportunity
The Marshall Plan prioritised rebuilding export capacity How should a Marshall Plan for Ukraine work?