Until when does Mr. Melissanidis think that he can set the ‘rules of the game’?

Even if one were to accept that in the past Mr. Melissanidis gave the impression that governments are in one way or another vulnerable to various demands, there is no reason for that status quo to continue. 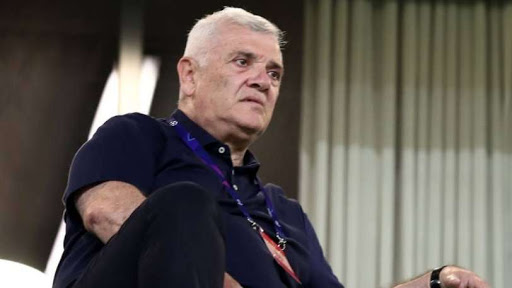 The front page of the athletics newspaper Live Score last Saturday is indicative of the demeanour and aesthetic of AEK FC management and of a deeply-rooted mentality that successive deputy ministers for athletics should in general should do what Dimitris Melissanidis says or else risk being dragged through the mud with attacks like “AEK views the deputy minister as the ‘Filipina household help of Olympiacos FC’.

Naturally, the messages to the deputy minister are sometimes delivered directly as AEK’s strongman is not known for mincing his words in speaking to political power.

This brouhaha has arisen because deputy minister for athletics Lefteris Avgenakis is trying to do the self-evident – to plan changes in the manner of election of the Board of the Greek Football Federation (EPO) in cooperation with UEFA and FIFA so that the vicious circle of dirty practices can be broken and so that the parody of a clean-hands operation can end.

Those who follow Greek football are well aware that EPO, which controls refereeing and crucial aspects of football, under the current “election” system essentially allows for manipulation of the process and for the control of organs which in turn make all the problematic choices.

Will the “Tiger” be allowed once again to hand out aprons or will they send him a bib to wear?

A more democratic and representative election process means very simply that dirty games to control football will not be set up.

That does not appear to be to Mr. Melissanidis’ liking and that in itself explains why he continues to be part of the problem of Greek football.

It is impressive how Dimitris Melissanidis believes that whichever government is in power he can always secure what he considers necessary.

During the Samaras administration we saw large fines for his companies being written off and a consortium in which he took part was given the job of privatising the OPAP betting company.

Under the Tsipras administration Melissanidis got what he asked for in the building of AEK’s new stadium despite the backlash from local residents, including the municipal authority which was elected with SYRIZA backing.

Now he is jockeying for a favoured position with the new government.

All this is being done by a man whose companies in the past have been implicated in tariff evasion.

Melissanidis is a defendant in a New York court case on the notorious mismanagement of Aegean Marine Petroleum Network. The plaintiffs maintain that Melissanidis and his people mismanaged up to 300mn dollars and the trial is scheduled for June.

One also cannot overlook that beyond the problems of football Dimitris Melissanidis is also linked to the problematical situation in racecourses.

After the privatisation of the ODIE racetracks company betting was undertaken by Ippodromies S.A., a subsidiary of OPAP S.A., which is managed largely by Melissanidis’ associates such as Spiros Fokas.

As a result, today at the Hippodrome we have a race organiser, Ippodromies S.A., which also has a strong influence on the regulative authority.

Is this the paradigm that we want for professional football?

Even if one were to accept that in the past Mr. Melissanidis gave the impression that governments are in one way or another vulnerable to various demands, there is no reason for that status quo to continue.

TANEA Team 20 Μαΐου 2020 | 13:09
Share
Περισσότερα άρθρα για Αγγλική έκδοση
Editorial: Attention must be paid
The European Union’s internal market had completely eliminated internal borders Op-ed: Fortress Europe?
The letter stresses US support for Athens’ dialogue with its neighbours Blinken underlines US ‘respect for sovereignty and territorial integrity’ in letter to Mitsotakis
The strategic dialogue was launched in Washington in December, 2018 US-Greece strategic dialogue covers all levels of bilateral, regional, international cooperation
The main duty of the state is to protect the lives and property of citizens Editorial: Prevention
Cyprus to brief permanent members of UN Security Council on Turkey's moves to re-open Varosha
She is a bright example of a politician who fearlessly and boldly is confronting her new challenge Editorial: Fofi, stand strong!
The enormous August wildfires prepared us for the fires of the future Editorial: Everything must come to light
We must discuss solutions refugees may provide for the productive process Editorial: Contributing to society
Greece is a pole of stability in the region and is a member of both NATO and the EU Editorial: Geopolitical opportunities
The original agreement in 1990 had an eight-year duration Exclusive interview with FM Nikos Dendias: ‘The US recognises Greece’s strategic position’
Apostolakis dodged a question on whether he plans to run on SYRIZA’s ticket Former SYRIZA defence minister supports procurement of French Belharra frigates
In health matters as in politics, along with coercion there is also prevention Editorial: The far right-anti-vaxxers osmosis
Editorial: Supply and demand
Concerns over a potential rebound of Golden Dawn followers are widespread Editorial: The duty to combat the far right