Editorial: Toning down the rhetoric

The country is being tested as is Greek society with major crises such as the concomitant public health and economic crises. 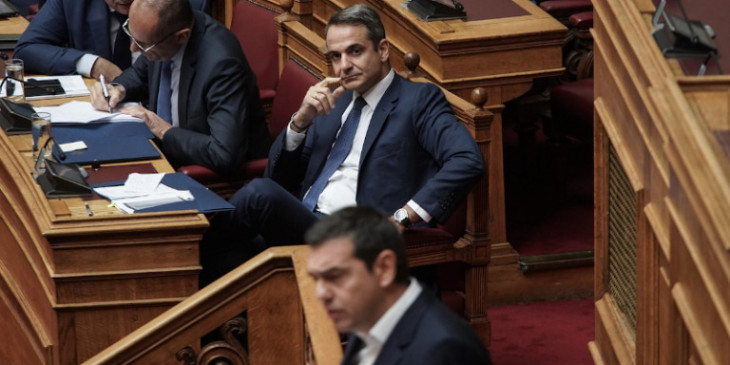 Democracy and parliamentarism require lively debate whether between MPs and between party leaders.

That does not imply a battle to the finish and establishing polarisation.

It especially cannot mean that because the country is being tested as is Greek society with major crises such as the concomitant public health and economic crises.
Our country is not yet out of the woods and political forces should tone down their rhetoric.

We learned in the recent past that sterile disputes and blind clashes contribute absolutely nothing to those who conceived of them or to citizens.

If the institutions of democracy including political parties are regaining the trust of citizens and they displayed a maturity that they lacked for a number of years.
Citizens know that they set different priorities with a view to the common interest.

This pristine image was recognised internationally and it must not be spoiled for the sake of a post-1974 attraction to a frontal clash which almost always has the first say.

It is time for the political system to shed its old bad habits.

Every government during its term in office offers many opportunities to have an opposition that is creative and useful for the country.

TANEA Team 29 Απριλίου 2020 | 21:32
Share
Δείτε επίσης
Περισσότερα άρθρα για Αγγλική έκδοση
The case will be re-tried in the framework now set by the Council of State Bombshell Council of State ruling accepts state’s vaccine side-effect liability
May Day should be honoured with a single march each year Editorial: Unity
Transcending the collective crisis will require leadership and not troublemakers Editorial: Messages
After a six-month shutdown, workers in the restaurant business laid the tables Editorial: The first step
The government has repeatedly said that the existing framework is outdated Battle royal looms over government bill overhauling labour relations, limiting strike action
The labour trade union movement is an invaluable and irreplaceable weapon of workers An urgent need for the rebirth of the trade union movement
Editorial: The pendulum of American politics
The thirty-somethings rushed to be vaccinated for the sake of their families and their friends Editorial: Front-and-centre
The parliamentary vote on approval of the plan’s implementation is expected before Easter Editorial: Liquidity
Turkey is keenly aware of the fact that there is a new player on the geopolitical chessboard Editorial: A just act
Biden takes historic step to recognise Armenian Genocide
National COVID-19 Committee spokesman explain public health decisions, planning for future
The EU Recovery Fund is enormously important and should not be viewed as routine aid or subsidies Editorial: A crucial green light from Germany
Editorial: A responsible Easter
After years of economic crisis, the Greek economy needs a boost to escape the recessionary spiral Editorial: Economic prospects