A response to the corona crisis in Europe based on solidarity

'We need a clear expression of European solidarity in the corona pandemic. Germany is willing. It is now Europe’s common task to buttress the existing programmes, fill the gaps and to span a safety net for all EU states that need further support. ' 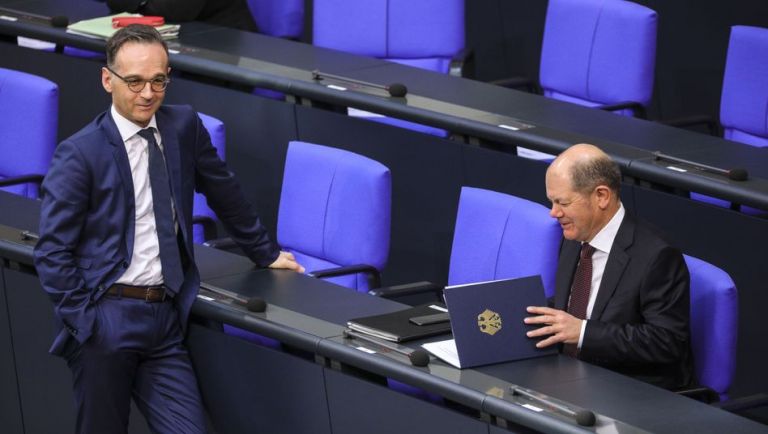 In a article co-authored by German Finance Minister Olaf Scholz and German Foreign Minister Heiko Maas the two ministers table a number of ideas on how the EU can get by through and after the coronavirus pandemic and grapple with its enormous social and economic repercussions in a spirit of solidarity that is needed to keep the Union together.

Even as a string of EU countries in Southern Europe and elsewhere are blasting Germany for stubbornly refusing a coronabond and mutualisation of debt, they argue for the absolute need for political and economic solidarity in order to keep the Union on its feet and on track in pursuing the ideals and objectives that led to its founding.

The authors argue for major aid packages to cover the financing needs of countries that most need it without austerity string attached which would produce the same mistakes as in the handling the aftermath of the 2008 economic crisis.

“We therefore propose that we work together quickly to ensure sufficient liquidity in all European Union countries, so that jobs do not depend on the whims of speculators. The funds must not come with any unnecessary conditions attached, as that would be tantamount to a rerun of the austerity policy that followed the financial crisis and would lead to unequal treatment between individual member states,” the authors argue.

The full text of the article that was published today in the Athens daily Ta Nea:

This virus knows no borders; it does not differentiate on the basis of colour or nationality. Our hearts go out to the people in Bergamo, Madrid, Strasbourg and many other towns in Italy, Spain and France. We are deeply moved by the heroic battle being waged for the lives of the sick by care workers and doctors alike. The Covid-19 pandemic is the biggest public health, social and economic challenge to be faced by all European countries since the creation of the European Union. One of the truths of this terrifying pandemic is that Europe was not at first adequately prepared in all regards and did not initially find convincing European answers to every problem. It is crucial that we now provide a comprehensive European answer in a spirit of solidarity. Each of our countries will only emerge strong from the crisis if Europe comes out of it strong and united.

Protecting the citizens is the top priority for all of us in the European Union. Helping each other is a matter of course. We are therefore using free capacities in German hospitals to treat patients from Italy and France in need of urgent intensive care, and German doctors have gone to help in Spain. We have sent medical supplies and ventilators to Italy. And thousands of European tourists have been evacuated on German aeroplanes from countries where medical care is often far worse than it is in Europe.

Almost all EU countries have greatly curtailed the movement of their citizens in order to slow the spread of the virus. In many places, public life has almost come to a standstill in order to avoid contagion. These measures are right. But they are making a serious dent in our economies. When shops have to close, events have to be cancelled and factories are forced to temporarily suspend production, the result is that millions of Europeans fear for their jobs, their firms and their livelihoods. The member states have varying financial capabilities with which to respond to this economic crisis, for which nobody is to blame.

Almost all EU states have already launched aid programmes to protect jobs and companies. In an amazingly short time, enormous sums have been found in all countries - to give businesses urgently needed bridging loans and to help individuals with a minimum of bureaucracy. But that’s not enough on its own. Europe’s founders knew that European solidarity is not a one-way street, but a life insurance policy for our continent. We must act in this historic crisis with this in mind. We need a clear expression of European solidarity in the corona pandemic. Germany is willing. It is now Europe’s common task to buttress the existing programmes, fill the gaps and to span a safety net for all EU states that need further support. Brussels has already greatly loosened the stability pact criteria and the rules on state aid. The European Central Bank has ensured stability on the financial markets with its announcement of a new purchase programme under which it is to buy government and company bonds. Additional billions are flowing from special EU budget funds to help the member states affected.

Now another step is needed. Financial stability must be brought to the countries worst hit by the corona crisis swiftly, simply and on the necessary scale. We therefore propose that we work together quickly to ensure sufficient liquidity in all European Union countries, so that jobs do not depend on the whims of speculators. The funds must not come with any unnecessary conditions attached, as that would be tantamount to a rerun of the austerity policy that followed the financial crisis and would lead to unequal treatment between individual member states. The European Stability Mechanism (ESM) already permits eurozone countries to borrow capital together on the same favourable conditions. For Italy, this would mean a fresh injection of 39 billion euros, and for Spain, 28 billion euros. They should be allowed to use this money for all necessary expenditures to fight the coronavirus. We don’t need a troika, inspectors, and a reform programme for each country drawn up by the Commission. What we need is quick and targeted relief. The ESM can provide precisely that if we adjust it sensibly.

Above and beyond that, we are proposing a pan-European guarantee fund to secure loans. In this way, the European Investment Bank (EIB) would ensure liquidity for small and medium-sized enterprises in the EU countries. It would enable national commercial and development banks to underwrite bridging loans, longer repayment terms and new loans. And the SURE project (Support mitigating Unemployment Risks in Emergency), which has now been taken up by the European Commission, will financially support EU member states who want to help companies hold on to their staff through the downturn caused by the pandemic using methods like Germany’s well-established short-time work scheme.

Finally, once the crisis is over, the aim will be to get Europe’s economy back on the path to growth and recovery. We EU member states have to act together to this end, in a spirit of European solidarity and with combined forces, in order to strengthen the European Union. All of us, including Germany, will take this into account in the negotiations on the Multiannual Financial Framework, in other words, the EU budget for the next seven years.

All of this will require great financial efforts from everyone, that is beyond question. But we are certain that together we can master this historic crisis. And what’s more, if Europe takes the right steps now, the European Union, our community of shared destiny, will emerge strengthened from the crisis. Let us stand together - for Europe, and against the virus.

TANEA Team 6 Απριλίου 2020 | 15:09
Share
Δείτε επίσης
Περισσότερα άρθρα για Αγγλική έκδοση
Mitsotakis-Biden talks: Greek-Turkish relations, the war in Ukraine, wayward Turkey’s new role in NATO
It is not in Greece’s interest for Turkey to be isolated or humiliated Editorial: Opportunity
The Marshall Plan prioritised rebuilding export capacity How should a Marshall Plan for Ukraine work?
Drop in COVID-19 deaths - number of infections, intubated patients stable, hospital admissions rise
Policing of universities is an unpleasant but necessary measure Editorial: No excuse
A strict price inspections policy is needed to curb untrammelled price hikes Editorial: Dealing with inflation
Editorial: Axes
Ta Nea has repeatedly called for decisive action Editorial: University police force plan on the back burner
Everything depends on how the social media are used Editorial: Words
SYRIZA’s gains in 2012 were a Pyrrhic victory. Editorial: Populism
There will be a 600 euro cap on the rebate Amidst uproar over skyrocketing energy costs, Mitsotakis announces rebates for households
This is the 12th anniversary of the deadly arson attack Editorial: Radio silence
Many cases involving extremely serious crimes have not been tried Editorial: A bitter political legacy
EODY has recorded a total of 3.34mn COVID-19 infections EODY: 32 COVID-related deaths, over 8,000 infections, 660 reinfections, 231 intubated patients
The Patriarch of Moscow has “blessed” Putin's war Op-Ed: The Ukrainian Church of shelters and catacombs, the geopolitics of Eastern Orthodoxy